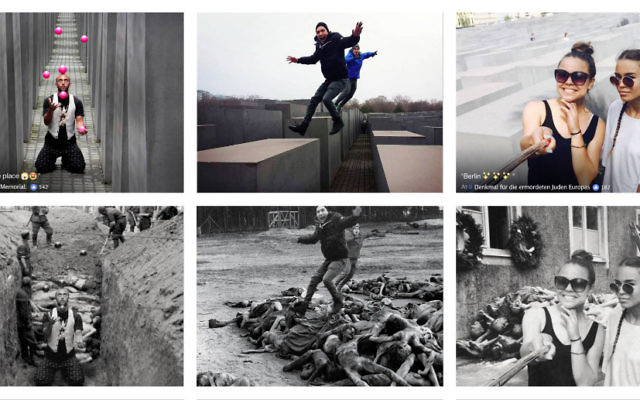 A series of photomontages showing people striking poses, taking selfies and even juggling at the Holocaust memorial in Berlin before the background changes to show them posing amid piles of murdered victims have gone viral on the internet.

The creator, Shahak Shapira, said he produced the “Yolocaust” website after seeing thousands of selfies and other photographs of young, smiling people posing on the memorial to Europe’s six million murdered Jews on social media.

The website went live on Wednesday and was clicked on more than 500,000 times and shared at least 70,000 times on Facebook, Mr Shapira said.

After a few hours, the site collapsed because so many people were trying to access it, he said.

Mr Shapira, 28, a Berlin-based Israeli satirist and grandson of a Holocaust survivor, said the selfies did not disturb or upset him, but he thought it was “a shame that there are people who don’t care”.

“These people should be the ones to keep the memory of the Holocaust alive,” Mr Shapira said.

He picked the word “Yolocaust” because it combines Holocaust and “YOLO” – social media shorthand for “You only live once.”

The 11 colourful images of young people showing their prettiest smiles or posing with selfie sticks turn into a disturbing sight when the background suddenly fades.

Instead of the memorial’s tombstone-like slabs, the people are seen smiling against a black-and-white backdrop of starved and gassed bodies.

The Holocaust memorial, which is located in Berlin near the city’s landmark Brandenburg Gate, consists of thousands of concrete slabs installed as an uneven field, comparable to a gigantic graveyard.

It is one of the most-visited landmarks in the German capital.

Since its inauguration in 2004, hundreds of thousands have come to see it.

Critics have complained about some visitors jumping across the slabs and revellers from a nearby nightclub taking cigarette breaks inside the memorial, saying such behaviour trivialises the memory of the millions murdered.