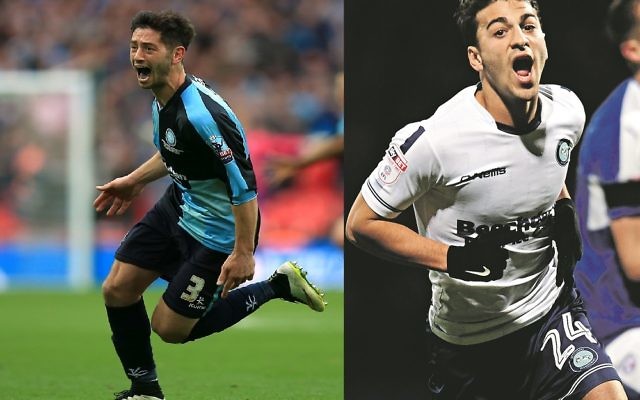 Wycombe Wanderers’ duo Scott Kashket and Joe Jacobson are dreaming of causing the biggest FA Cup upset of the season so far when they take on Tottenham Hotspur on Saturday afternoon.

The pair, who are both boyhood Spurs supporters, have been speaking to Jewish News ahead of the League Two side’s trip to White Hart Lane.

Kashket, who is the club’s top scorer, claimed his 14th goal in 17 appearances in Tuesday night’s 2-1 Checkatrade Trophy quarter-final win at Mansfield, and admits he’s been dreaming about scoring the winning goal at the weekend.

The 20-year-old said: “It will be the biggest game of my club career. Everyone will be up for it, it will be like a cup final and as a Spurs fan and with it being their last year at White Hart Lane, it makes it all the better as it will be the last opportunity I’ll get to play there.

“To win or even get a draw and take them back to Adams Park for a replay would be brilliant for the club and for all the players. It would be a big confidence boost for everyone at the club, and if we could get them back for a draw, we might fancy ourselves that little bit more. I have dreamt about scoring the winning goal!”

Believing they can cause an upset, he adds: “I believe that in the FA Cup, anything can happen and I think the other players think that as well. In the last round against Stourbridge, they nearly caused an upset against us, we’ll have to try and do to Spurs as they did to us and go for it.”

Full-back Jacobson has already secured 25 tickets for his family and friends, and said: “They’re all just as excited as I am, if not more! These games don’t come around too much and being a Spurs fan, it’s always been a dream to play there. It will be awesome, especially being the last year at the ground, it will be special for me.”

Talking up their chances of a shock result, he said: “We’re unbeaten in 16 games and there’s a lot of confidence throughout the squad. If things aren’t going right, we have players who can come off the bench to change the game, everyone is just buzzing around the place at the moment, and it’s a great thing to be part of.

“We’ve got nothing to lose, we’re obviously going to be massive underdogs, but we’ve seen things happen in the FA Cup before – which is why it’s such a special competition.”

Having taken over both the captain’s armband and penalty responsibility in recent weeks, he’d also be more than confident of stepping up on Saturday should the situation arise. “If the captain’s not playing, I’ll put my hand forward”, he said. “Last week we had a penalty and I grabbed the ball. I’ll definitely be up for it and would never shy away from anything like that.”

And even more hopeful they can come away with a positive result, he added: “We don’t want to go there to make up the numbers, but want to show what we’re about and what we can do. We’re proud of the unbeaten run we’ve got and don’t want to just throw it away against a huge Premier League team. We want to try and get something out of the game. We know it’s going to be extremely difficult, but just hope it’s one of those days where everything goes our way and that we can cause some kind of upset and make the headlines.”