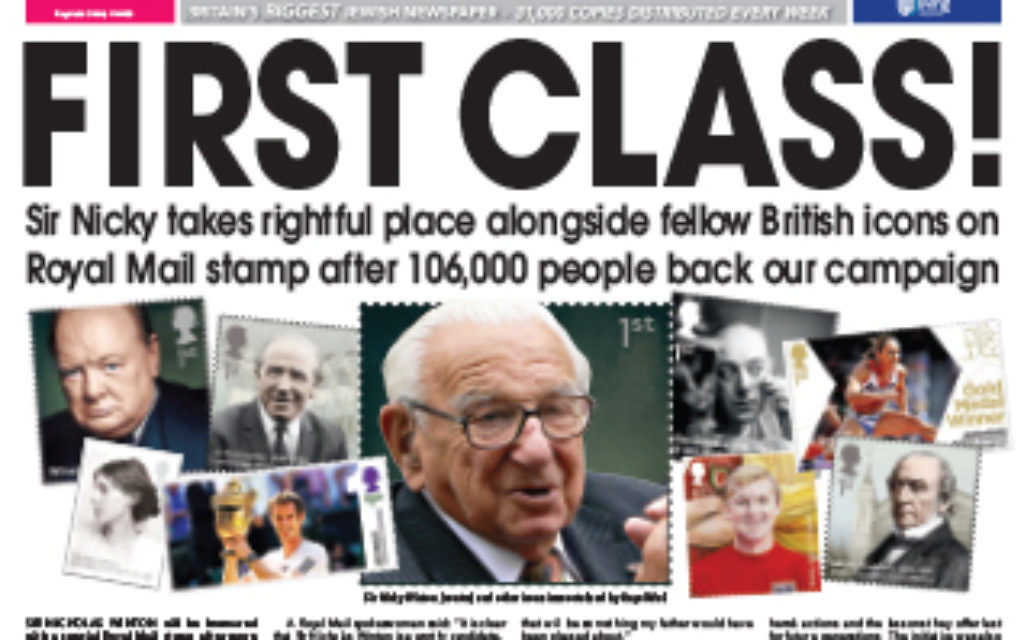 Success: Our campaign to get a Royal Mail stamp for Sir Nicky

IT’S RARE [thankfully!] to redo the entire Jewish News front page on deadline, but there wasn’t so much as a debate when Sir Nicholas Winton’s death was announced late on 1 July.

After doing so, our next thought was how we could best honour this hero of mankind’s darkest hour.

What to do for a man knighted by the Queen and presented with the Czech Republic’s highest honour?

The result of our deliberations was a campaign launched six weeks ago for a Royal Mail stamp.

We never expected that call to attract supporters in their tens of thousands or for it to be trending on petitions website change.org.

Even as the strong public desire for this rare honour became clear, we didn’t anticipate the Royal Mail fast-tracking its production to next year; only stamps featuring Britain’s 2012 Olympics stars have been introduced quicker. That both happened owes far less to our campaign than to the deep affection and admiration in which Sir Nicholas is held.

Huge thanks to the Royal Mail for bestowing a truly British honour on a truly great Briton.

We can think of few others who so richly deserve their place among a pantheon of British greats that includes Winston Churchill, another hero of the Second World War. But perhaps even more important than paying tribute to this modest hero, we hope this honour will bring his inspirational actions to the attention of even more people and provide a lasting reminder that one person can make the ultimate difference.

All the more inspirational because, unlike many recognised before him, he is being honoured for efforts unrelated to his working life.

In the year in which we mark the 70th anniversary of the end of the Nazi atrocities, it will also help to remind the world of the good that emerged from this darkest of periods.

While Sir Nicholas always shied away from the title ‘hero’, his daughter said of the honour: “If it means his story can continue to inspire more people to go out and help others, that would have been something my father would have been pleased about.”

We share this victory with the 106,000 who backed our campaign and organisations that helped promote it, including the Holocaust Educational Trust and change.org.

This would not have happened without you.