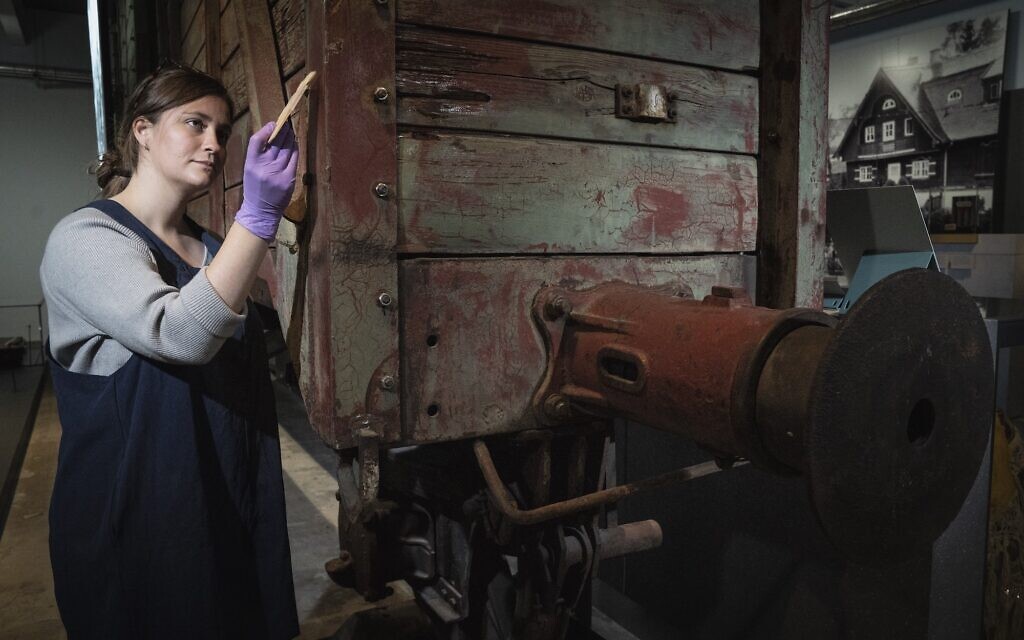 It’s the little things that catch at the heart: a bridal wreath sent to Britain on the Kindertransport; the pearl tie-pin deposited at a London branch of Barclays Bank by Marek Kellerman, a brush salesman from Bratislava, who never returned to retrieve it; a caption showing that one young Jewish woman’s parents sent her off to Britain to be a domestic servant, armed with the twin “necessities” of a cookbook and an evening dress, primed to be ready for any occasion.

Then there are bigger things: Gena Turgel’s wedding dress from her marriage in Belsen after liberation; an original railway carriage, typical of those used to deport the Jews of Belgium to the camps; an entire wall of more than 100 documents showing the paperwork mandatory for just one family to leave Austria; and, in front of the railway carriage, a row of almost unreadable “last letters”, flung from trains by Jews on their way to death camps — unreadable because they are hardly possible to look at without tears. 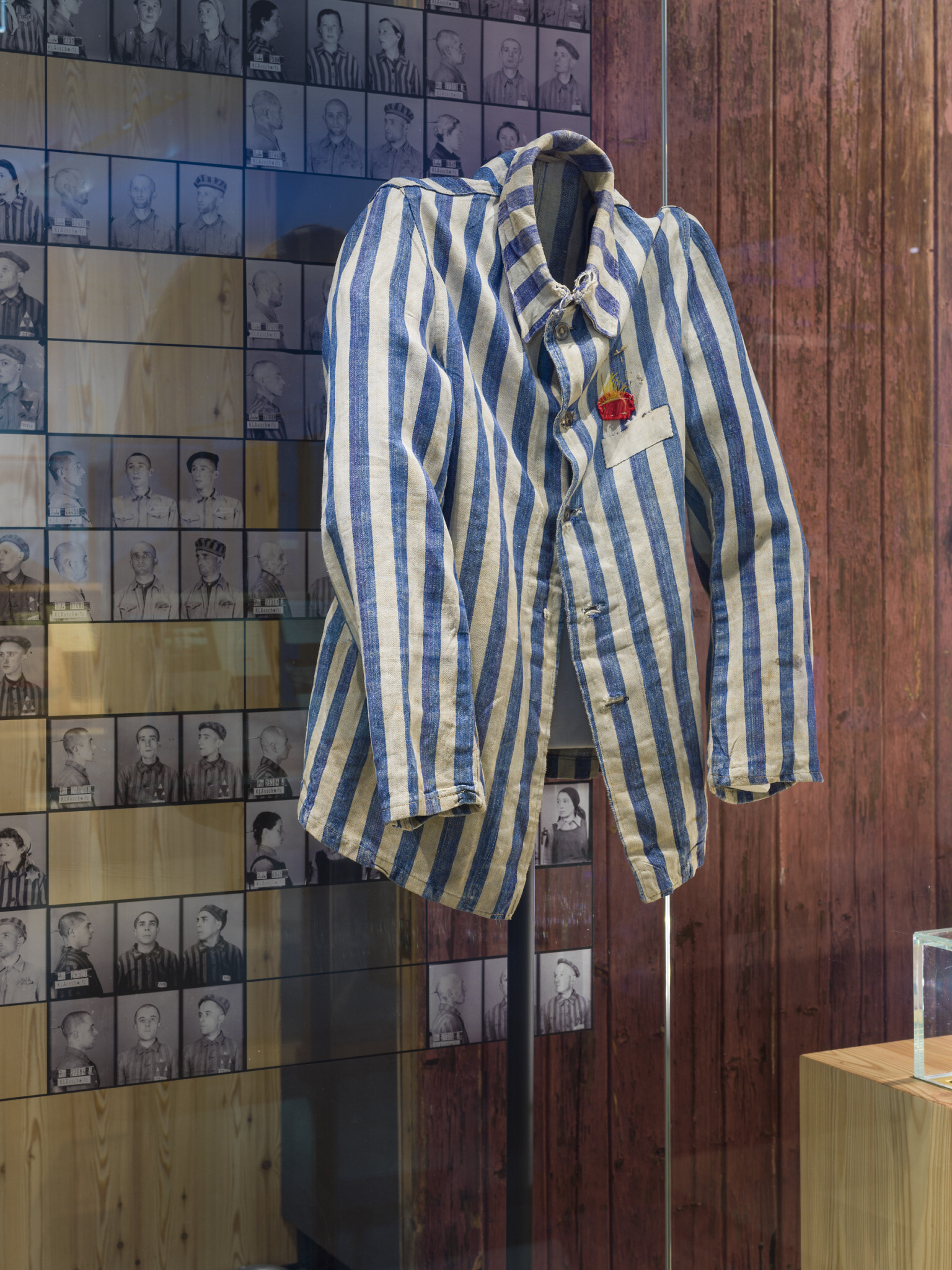 The Imperial War Museum’s magnificent new Holocaust and Second World War galleries open to the public next week (October 20), and each features a host of firsts, or, as the IWM puts it, “unseen objects, untold stories and unheard voices”.

Even for the Jewish visitor who believes they have a familiarity with the Holocaust, there is so much to discover in the new galleries.

With their opening, IWM becomes the first museum in the world to house dedicated Second World War and Holocaust galleries under the same roof, allowing visitors to understand the connection between the progress of the war and the industrial-scale genocide carried out against the Jews.

The project has been six years in the making and cost £30.7 million.  The attention to detail is incredible: many of the Holocaust rooms are brightly-lit spaces — because, as one of the curators told the JN, “we wanted to show that the Nazis did nothing in secret, so many of their crimes took place in open daylight”. 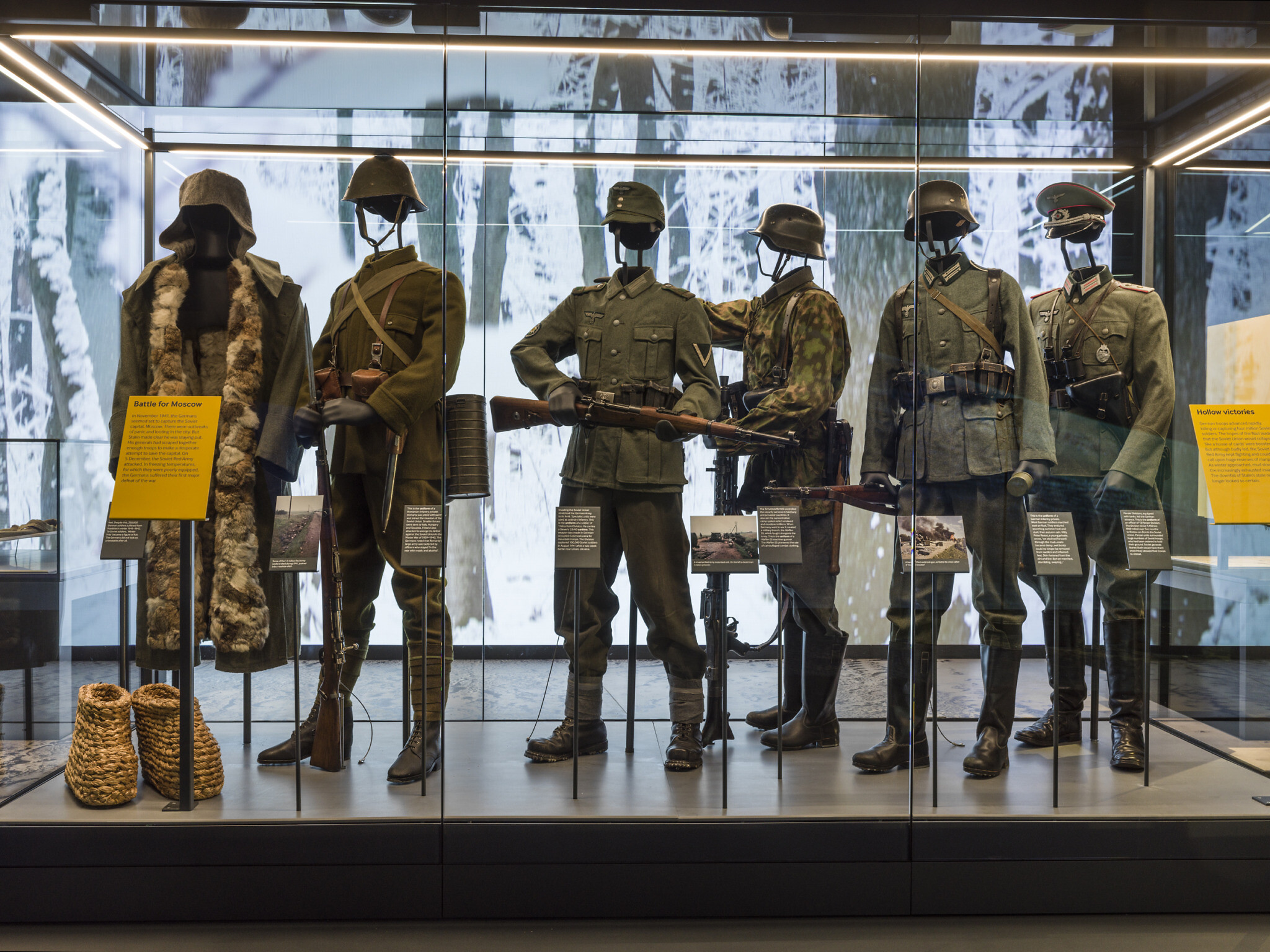 Or there is even a specific typeface for the words of the perpetrators, and a separate, distinct typeface for the testimony of the victims. The latter, I am told, was designed by a pre-war Jewish typographer, but never completed. The IWM has filled in the gaps. The perpetrators’ typeface is taken from an imprint of the keys on the typewriter used by Arthur Seyss-Inquart, the Nazi governor of the Netherlands. The typewriter itself is on show: he used it for countless orders relating to the deportation and murder of Dutch Jews.

Many of the thousands of artefacts, films and pictures on show were in the museum’s previous Holocaust collection, but many more are new and are differently displayed. For example, a section on “book-burning” would perhaps previously have shown books on the floor or pictures of book bonfires. Now the “books” (wooden facsimiles) are restored to the shelves, so that the visitor can pick out work by, say, Sigmund Freud, and discover the fate of the author. 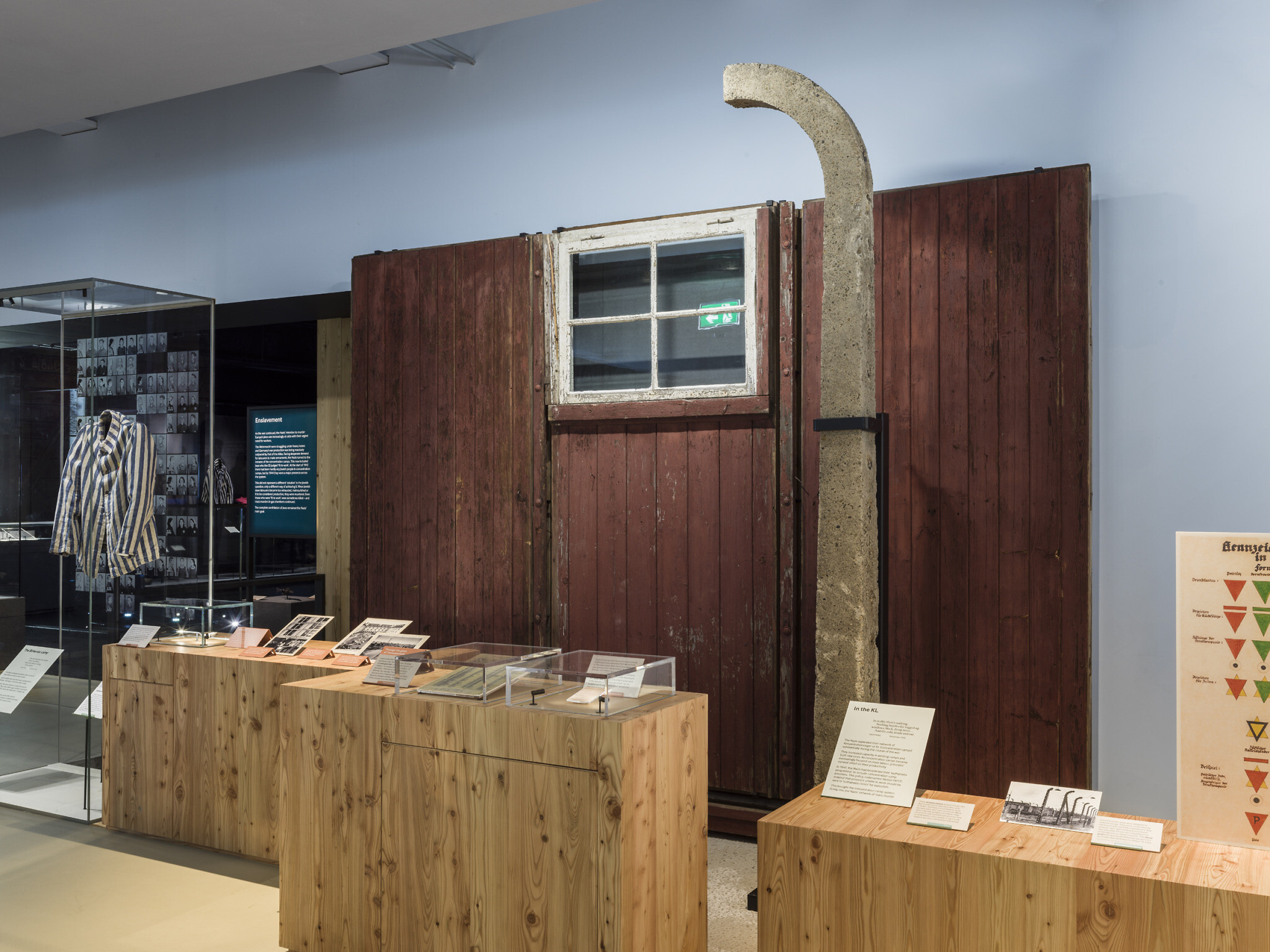 And this exhibition no longer refers to “Kristallnacht”, the notorious Night of Broken Glass” in November 1938, but rather “the November pogroms”, to remind us that it wasn’t just property which was destroyed on November 9 and 10 1938 — 90 people were killed in the rioting.

We begin — and, bearing in mind that many of the visitors will be schoolchildren aged 14 plus — in the most heartwarming way, showing Jewish families enjoying their lives before the war. Here are thousands of ever-changing pictures and films of Orthodox and secular Jews in central Europe, laughing and messing about in boats, or like Graziella Falco from Milan, celebrating her bat mitzvah. There are football matches, swimmer and ski-ers, musicians, people shopping or strolling by a beach. In other words, you and me; people going about their daily lives with not a hint of the catastrophe waiting in the wings.

And simultaneously we are introduced to the theme of “totems” — life-size figures whose pictures appear throughout the exhibition, enabling us to meet them eye-to-eye. It is a striking thing to do and is at its most chilling in a display showing the most senior Nazis, those closest to Hitler. Here, life-size, is Goebbels, with Goring and Himmler close by. It’s a genuinely frightening moment. 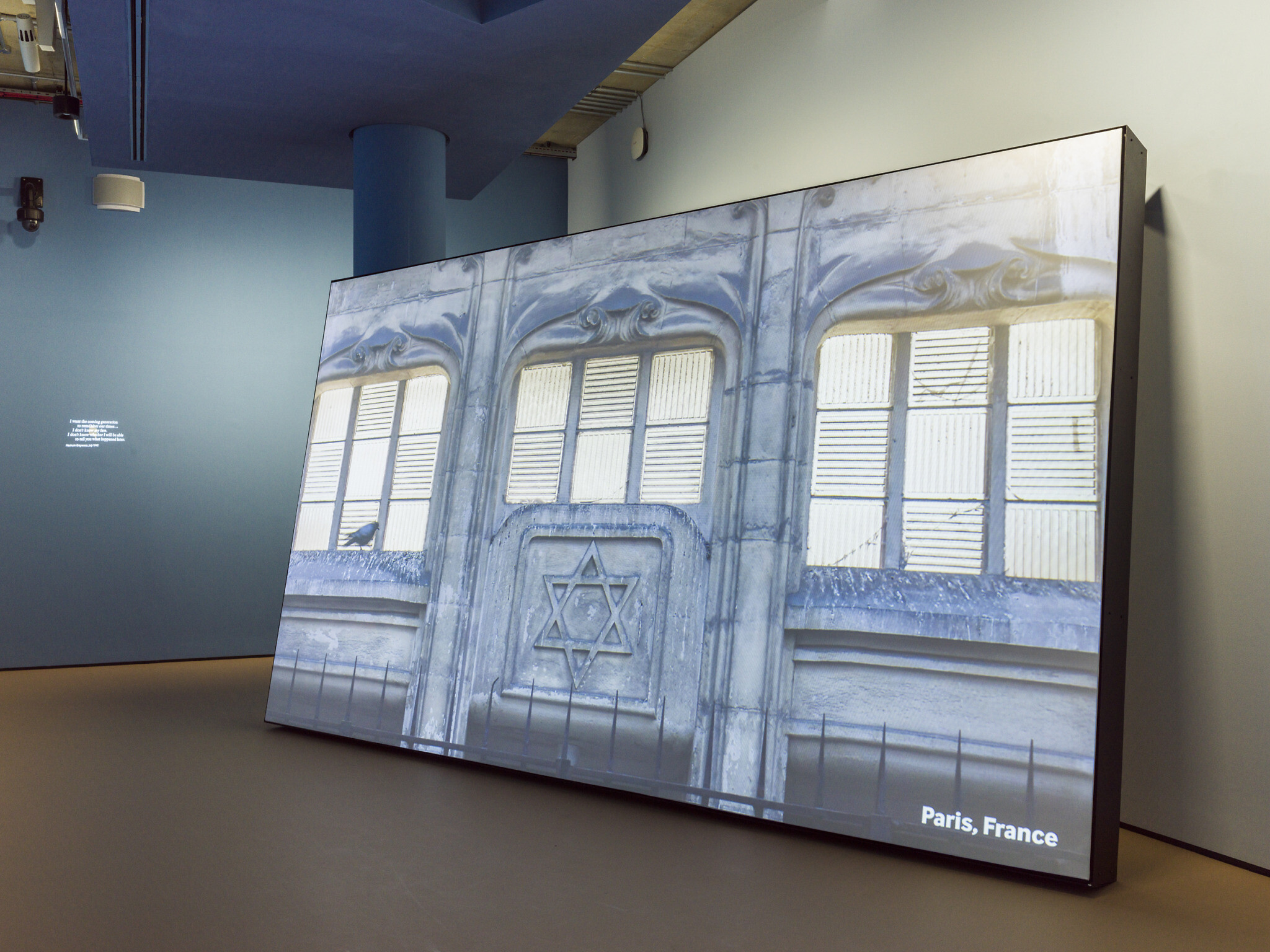 Some of the material has been lent to the IWM by Yad Vashem and the Wiener Library. Those familiar with the latter’s singular collection of Nazi “board games” will be unsurprised to see its loan of the repulsive game, “Juden Raus” or “Jews Out”, in which players had to collect a Jewish figure and dispatch him or her to Palestine. “Even senior Nazis thought this was too much”, a curator says. “They thought it trivialised their serious message about Jews.”

By 1936 Hitler was triumphantly staging that year’s Olympic Games in Berlin. But just 25 miles away, construction was underway for the Sachsenhausen concentration camp.

Up until Operation Barbarossa and the Nazi invasion of the Soviet Union in June 1941, the IWM curators believe that the Holocaust was not inevitable. But as the tide of war began to turn against the Axis powers, the frenzy to kill Europe’s Jews grew and grew, first with their walling up in ghettos and then with their transport by train to the death camps.

And the cries of the victims — and those about to become victims — are louder on the walls of the exhibition. One man writes: “Shall we go? and if so, how?” Herta Nathorff, a paediatrician, says bitterly: “Father says he didn’t want to sell the company. The name — it should go under, with us”. 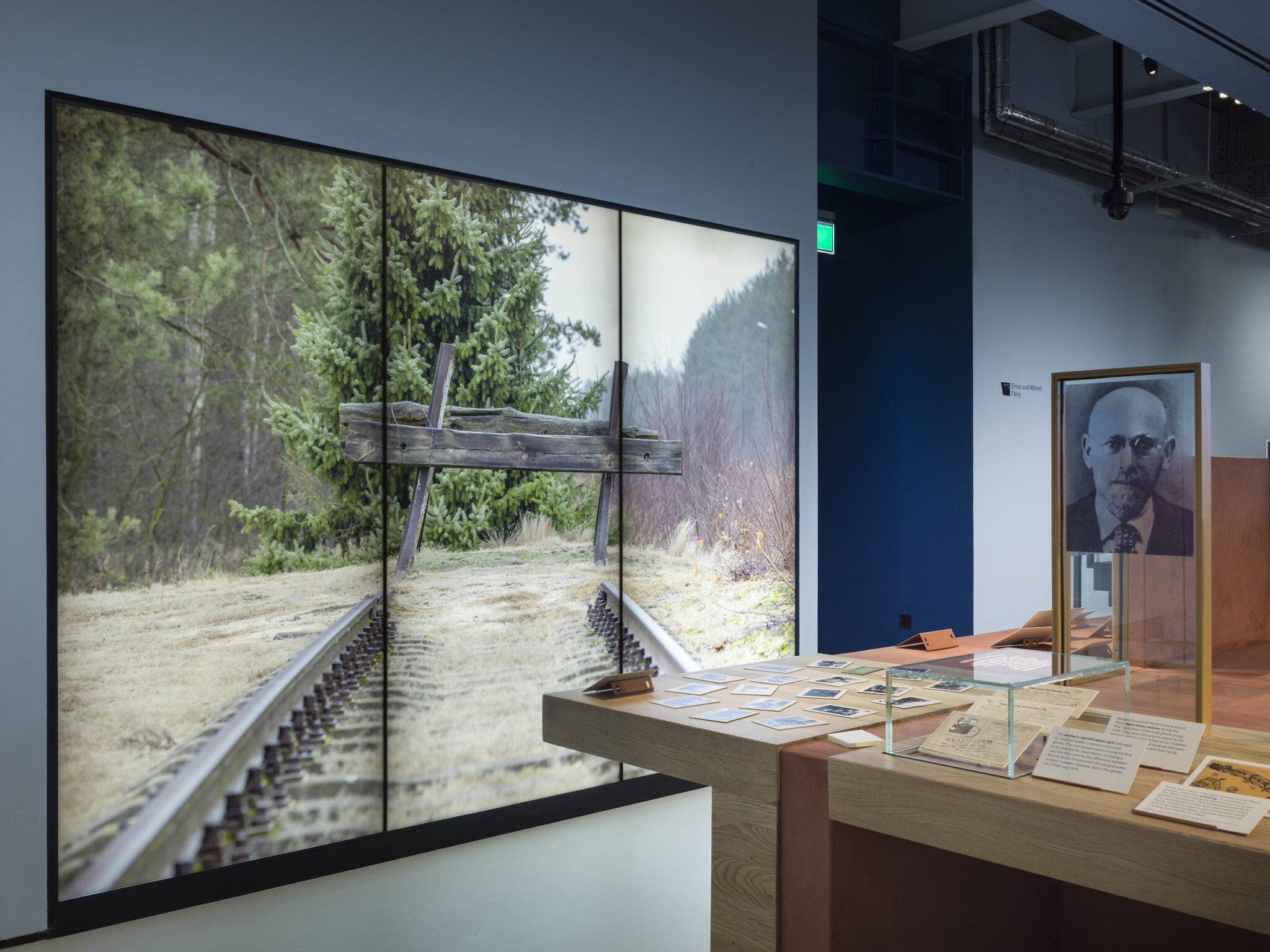 One of the most remarkable things on show is part of the Oneg Shabbat archive, a metal box containing painstakingly assembled contemporary witness statements and documentation, organised by Emanuel Ringelblum in the Warsaw Ghetto. There were three main parts of this archive. In the first and the second, documents were stored in 10 such metal boxes and two giant milk churns. They contained material showing that Jews in the ghettos were aware of the activities of the Einsatzgruppen, the troops carrying out mass shootings of Jews in other parts of Europe. Two of the Oneg Shabbat collection were dug up post-war from their burial sites; a third, of documents also hidden in milk churns. is believed to be buried today under the Chinese embassy in Warsaw, and has never been recovered.

Of all the thousands of images in this extraordinary permanent exhibition, a curator says that one picture is seared in her mind. “It’s a young woman holding a baby. It’s the last moments of their lives. She’s waiting to be shot. I can’t forget that picture”. She doesn’t say so because she doesn’t need to: it could have been any one of us.

The IWM permanent Holocaust and Second World War galleries open to the public on October 20, admission free. The museum is publishing a new book of untold personal stories, The Holocaust, by IWM historian James Bulgin, on the same date. Personal stories also feature in an illustrated history of the Second World War, Total War, A People’s History, by Kate Clements, Paul Cornish and Vikki Hawkins, published in partnership with the IWM. 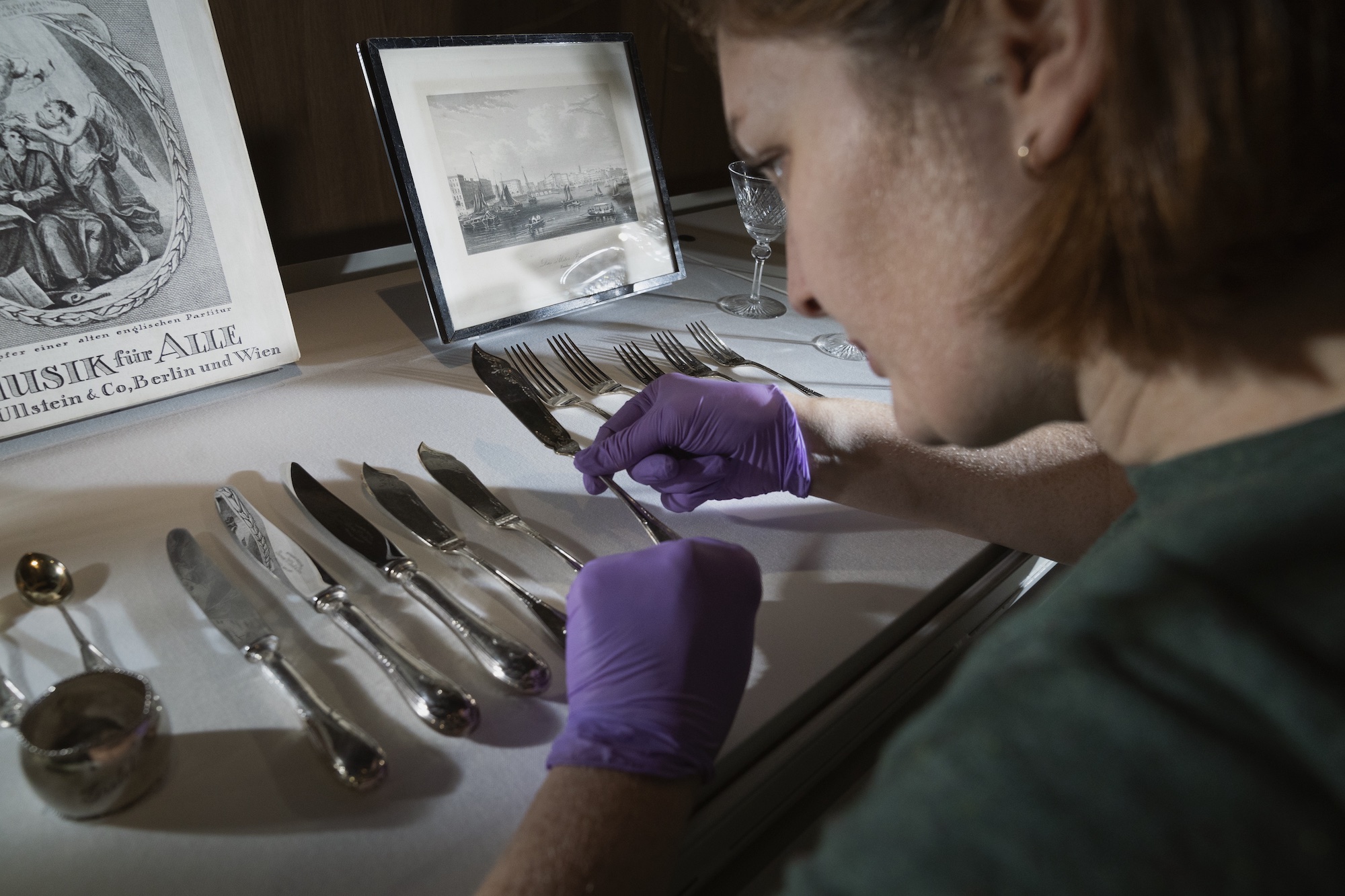