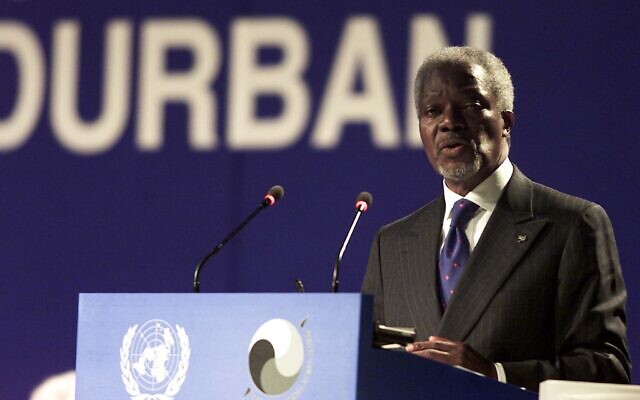 Kofi Annan Secretary-General of the United Nations Organisation addresses the delegations during the opening session of the World Conference Against Racism (WCAR) in the coastal city of Durban August 31,2001.[Some 6,000 delegates gathered for the ceremony which is already deeply mired in rows ranging from charges of Israeli racism to issues of reparations for slavery.

The British government has confirmed it will boycott an international conference in New York over “historic concerns” about antisemitism and anti-Israel hatred.

Jewish News revealed earlier this month how Boris Johnson’s government would join the US, Australia and Canada in refusing to attend the 20th anniversary of the Durban conference.

A Government spokesperson has now confirmed: “Following historic concerns regarding antisemitism, the UK has decided not to attend the UN’s Durban Conference anniversary event later this year.”

Insiders said the decision was based around antisemitic action and speeches in and around the previous conferences.

A Conservative Friends of Israel spokesperson said the group “applauds this latest decisive action from the UK government in opposing antisemitism in whatever form it occurs.”

Marie can der Zyl, President of the Board of Deputies, said: “We warmly welcome the Government’s announcement that the UK will not attend Durban IV, a commemoration of a supposedly anti-racism conference which itself was antisemitic. We will always support the fight against racism, but this must include opposing antisemitism in all its forms.”

JLC Co-Chief Executive Claudia Mendoza thanked the government “for taking our concerns seriously and withdrawing from this abuse of UN processes. People need to be under no illusions, this conference exists to deligitmise Israel and legitimise anti-Jewish racism.”

Karen Pollock of the Holocaust Educational Trust said the government had “done the right thing by taking a principled stance” by boycotting the Durban conference.

Acting chair of the Zionist Federation, Richard P Woolf, also welcomed the announcement, saying the “government have ensured that the UK continues to stand on the right side of history against the pernicious and globally rising scourge of antisemitism.”

Meanwhile, Arsen Ostrovsky, Chair and CEO of The International Legal Forum (ILF), welcomed the news before he is scheduled to speak at Monday’s ZF event on the dangers of the conference.

He said Britain “should be applauded”, adding that the “Durban 2001 conference.. descended into an unhinged display of Jew hatred and virulent antisemitism, setting the foundation for the mainstreaming of the kind of violence against Jews we have witnessed on the streets of London”.

Luke Akehurst, Director of We Believe in Israel, also thanked the government and “the thousands of activists who emailed their MPs in the campaign we ran with Israel Britain Alliance to call for this decision.”

The UNESCO organised event had previously been blighted with one-sided attacks on Israel including in 2001 draft resolution which likened Zionism to “racism.”

The Jewish Leadership Council, Board of Deputies and the Conservative Friends of Israel groups had been amongst those to write to Foreign Secretary Dominic Raab in recent months urging the UK to boycott the event.

A letter sent jointly by the JLC and the Board to the Foreign Secretary warned that despite being known as a conference against racism Durban “is remembered by the international Jewish community as a “hostile showcase for open antisemitism.”

The letter also noted that the infamous antisemitic forgery Protocols of the Elders of Zion had been distributed within the conference venue and during Durban 11 the Iranian President Mahmoud Ahmadinejad had claimed Israel was founded on the “pretext of Jewish suffering.”

Last month a spokesperson for the Canadian government confirmed: “Canada is concerned that the Durban Process has and continues to be used to push for anti-Israel sentiment and as a forum for antisemitism. That is why we do not plan to attend or participate in events surrounding the 20th anniversary of the Durban Declaration and Program of Action.”

Australian Prime Minister Scott Morrison also confirmed: “We will not associate Australia with one-sided and contentious language that singles out Israel or an event that champions such language.”

The conference is scheduled for September 22 in New York.

The UK did not attend the 10th anniversary of the Durban Conference in 2011, following the same concerns.