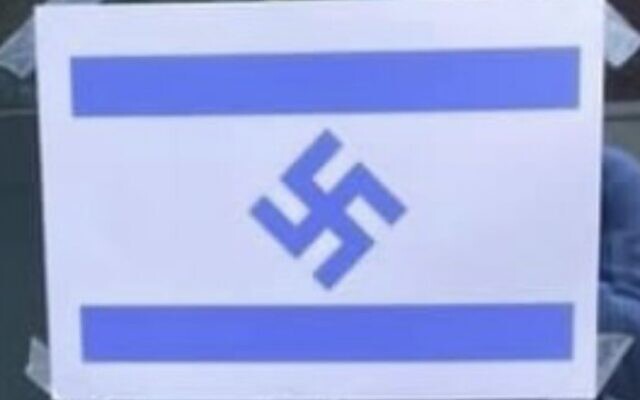 Two people have been arrested following the discovery of antisemitic posters on the Royal Holloway, University of London, campus.

Police confirmed that hat a 21-year-old man from Egham, Surrey, and a 19-year-old woman from nearby Englefield Green had been arrested following “a number of reports of hate crime.”

Both individuals have been released on bail with investigations are still ongoing.

The swastikas were found outside entrances to campus facilities in Egham, Surrey,  and on the library terrace.

In one instance, a poster with a swastika in place of the Star of David on the flag of Israel was displayed outside the premise’s library.

The Jewish MP Dame Margaret Hodge is the Chair of the Royal Holloway College Council since November 2018.

A spokesperson for Surrey Police confirmed: “A 21-year-old man from Egham and a 19-year-old woman from Englefield Green were arrested last night on suspicion of offences contrary to section 18 of the Public Order Act.

“They were both issued with police bail earlier this evening (19 May) while our investigation continues.

“This relates to a number of reports of hate crime at Royal Holloway University. We are working closely with the university as our investigation progresses.”

RHUL Jewish Society had condemned the acts saying: “Opposition to the Israeli government’s actions does not justify these acts of bigotry, just as Islamist violence does not justify Islamophobic bigotry.

“Royal Holloway has garnered a reputation of being a liberal, diverse and welcoming University, yet these images and experiences make Jewish students feel more and more as if that doesn’t apply to them.”

Several other instances of antisemitism that have occurred on the RHUL campus are similarly being investigated by the police.

“Our university has an abhorrence of violence, discrimination and harassment and we believe that we all have a role to play in maintaining a peaceful, respectful, inclusive and welcoming community, on and off-campus.

“We witnessed unacceptable behaviour on our campus and online last weekend which we reported to the Police who have now taken action and arrests have been made.

‘We are also following our own disciplinary procedures and will not hesitate to use the full range of sanctions available to us.”