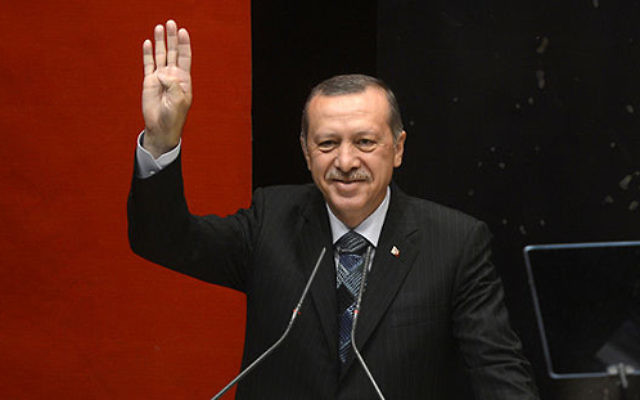 President Recep Tayyip Erdogan of Turkey accused Israel of restricting Muslim worship while calling on all Muslims to embrace the Palestinian cause and protect Jerusalem.

Erdogan made the call to Muslims on Tuesday during public remarks at the Symposium of Jerusalem Platform in Istanbul. A Turkish government document sent to JTA summarised his remarks.

“It is not only the duty of unarmed Palestinian children to protect Al-Aqsa mosque,” Erdogan said.

He added: “We will continue to support Jerusalem with all our means as we have done so far. We will work with might and main to protect Palestine and the sanctity of Al-Aqsa mosque.”

In accusing Israel of restricting Muslim worship, he said it was “harming the sanctity” of Al-Aqsa and that “Policies of oppression, isolation and discrimination have been pursued since 1948.”

He referred specifically to the proposed Israeli legislation to limit the volume and the hours of the Muslim call to prayer, calling it “dangerous.”

“This practice is offensive not only for the Palestinians, but for all Muslims,” Erdogan said. “We have communicated with the Israeli officials our concerns on the kind of dangerous consequences this might have, if such a bill is enacted.”

Erdogan threatened that the region “will not find peace until the wound in the Middle East is treated.” He called for “an independent, sovereign Palestinian state with the capital, East Jerusalem, based on the borders of 1967,” as the “only way to achieve lasting peace in the Middle East.”

His comments come as Israel and Turkey are taking the last steps toward fulfilling a reconciliation agreement signed over the summer restoring diplomatic ties following a six-year freeze.

Erdogan also addressed the ongoing civil war in Syria, saying that Turkey was forced to intervene in Syria alongside the rebel’s Free Syrian army in order to “ensure justice and put an end to the reign of the oppressor Al-Assad,” while condemning the United Nations for its inaction and lack of attention to the Muslim world.