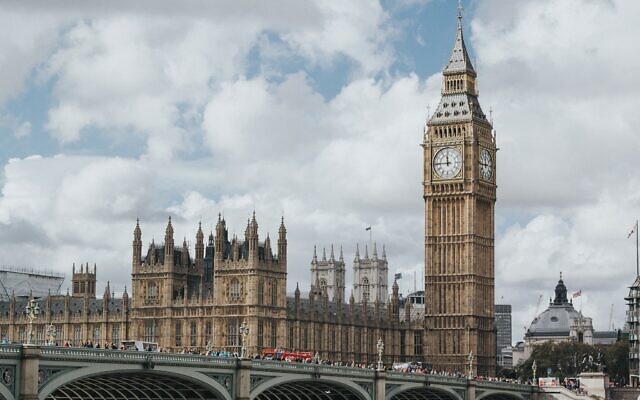 Houses of Parliament (Photo by Marcin Nowak on Unsplash)

Tory MP Christian Wakeford has used a Commons debate sparked by two anti-Israel online petitions signed by more than half a million people, to question a Labour frontbencher about his party’s commitment to a Palestinian state.

The Bury South MP said while it was “certainly politically expedient to call for the recognition of Palestine right now” such a state could not in reality be defined without its borders being defined.

In response Labour’s Shadow Middle East Minister Wayne David said: “There is no expediency about it—it is a long-standing commitment that we have, and we stick to it.”

He continued: “Of course, there are issues to be worked out, but it sends an important signal that we believe that there should be an active Palestinian state and that we recognise it as a matter of principle.”

The exchange took place during Monday’s debate, which was sparked by the signing of two e-petitions: one calling for recognition of Palestinian statehood and the other urging government to block all trade with Israel and, in particular, arms.

Recalling how parliament had in 2014 called on the UK government to recognise a Palestinian state, David called for the current Conservative government to honour its own stated commitment to a two-state solution.

Earlier Wakeford had said he was “deeply concerned by the substance of the petitions.”

He told the Commons: “I consider myself a friend of both Israel and the Palestinian people, and I do not believe that these petitions will result in any positive outcome for either.

“The language that these petitions employ is clearly inflammatory, breeds misunderstanding and foments hatred and hostility.”

Labour’s shadow Middle East Minister also said: “Let me say at the outset that there can be no justification whatever for antisemitism in any shape or form, whatever people’s views are on the Israel-Palestinian issue: let us be clear about that.

“Just a few weeks ago, nearly 300 people, Israelis and Palestinians, lost their lives in a violent conflict between Hamas and the state of Israel.

David said “the immediate issue that led to the conflict was the appalling violation and desecration of the al-Aqsa mosque in Jerusalem. ”

He said these developments were “disgraceful, and the international community must do all it can to ensure that such scenes never happen again.”

“Religious sects must be respected at all times,” said David.

Addressing the substance of the two e-petitions Middle East Minister James Cleverly said: “There have, of course, been many calls over the years for recognition of Palestinian statehood. The UK Government position is clear: the UK will recognise a Palestinian state at a time when it best serves the object of peace.

“Bilateral recognition in itself cannot, and will not, end the occupation.”

Cleverly added that “without a negotiated peace agreement, the occupation, and the problems that come with it, will continue.

“We are committed to the objective of a sovereign, prosperous and peaceful Palestinian state, living side by side with a safe and secure Israel. ”

He also paid tribute to Labour’s Catherine McKinnell for securing the debate and for the work she had done on the issue.

Newcastle MP McKinnell, who had been an outspoken campaigner against antisemitism in Labour under Jeremy Corbyn, had earlier led the debate.

While “sharing the deeply held concerns for the plight of the Palestinian people”, McKinnell, a vice-chair of Labour Friends of Israel, said she did believe “sweeping sanctions of the kind proposed by the second petition would bring the prospect of a two-state solution any closer.”

Tory MP Andrew Selous was amongst those to call for the recognition of Palestinian state.

“Recognition could be a spur to achieving peace,” he said. “Many of us are left thinking, ‘If not now, when?'”.

While Labour’s Naz Shah said the government had “an immediate moral and political duty to act on Palestine.”

She added:” The Government cannot meet their word about a two-state solution while they recognise only a single state—it will not work.

“Let me be clear: the only party stopping the UK from recognising the state of Palestine is the Conservative Government.”

Speaking for the Liberal Democrats Alistair Carmichael raised the issue of the UK government’s funding of what he suggested was a disproportionate military response by Israel during the recent conflict with Hamas.

“Like others, I bow to no one in my acceptance of Israel’s right to defend herself, but we all know that self-defence in law, wherever we find it, must always be commensurate, appropriate, and proportionate, and what we saw was none of those things,” he said.

But the Lib Dem’s Home Affairs spokesperson added: “The idea that these events were contributed to by arms sold from this country is something that many people, wherever they stand on the debate, find disturbing.”