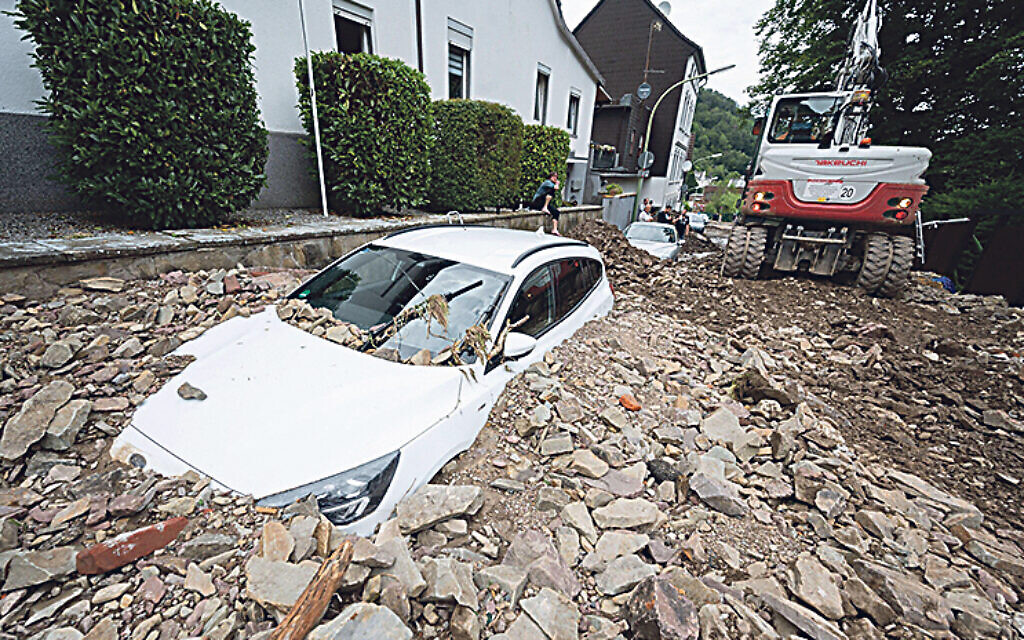 A car is buried by rubble in the Hohenlimburg district. Credit: Julian Stratenschulte/dpa/Alamy Live News

Heatwaves and floods have dominated Europe’s weather in recent weeks – and at times to devastating effect. What does the Torah say about extreme weather?

“God smelled the appeasing fragrance, and God said to Himself, ‘Never again will I curse the soil because of man, for the inclination of man’s heart is evil from his youth.

“I will never again strike down all life as I have just done. As long as the earth lasts, seedtime and harvest, cold and heat, summer and winter, and day and night, shall never again cease [to exist].”

Thus promises God after the deluge: up until that point, the fate of earth was intrinsically linked with the spiritual standing of humankind; it rained when Adam prayed, it gave forth thorns when he sinned.

After the generation of Noah, however, this was no longer tenable: man was to be part of the ecosystem, not above it; a servant, not its master.

The pulse of the Jewish year was always the seasons: Pesach linked with the ripened barley; Shavuot with the first fruits. Jews in Israel knew precisely the dates by which they should expect rain; the sages instituted a series of precisely calibrated fasts lest, God forbid, the rains did not come in their proper time.

God gave two sets of commandments to Adam: “Fill the earth and conquer it” and “guard and work [the Garden of Eden]”.

The era of modernity has certainly led to mankind filling the first command: we had, it seems, managed to fill the earth and conquer it, becoming masters of the soil and the sky; every creature from the largest beast to viruses subdued for our needs; our physical bodies becoming mere conduits for technology.

Nature, at last, may be fighting back. Extreme weather is becoming more frequent, while horrific diseases are emerging from our encroaching of ecosystems to which we do not belong.

In the words of Rav Yosef Dov Soloveitchik: “As long as man lives within the bounds set by his Creator he remains the son of Mother Earth and may claim asylum in her lap… she is kind to herself, to her son who is an integral part of her.”

Hope, in the words of the late Rabbi Lord Sacks, is an active virtue, and building a future in which we can live in partnership with nature will take patience, sacrifice and hope.