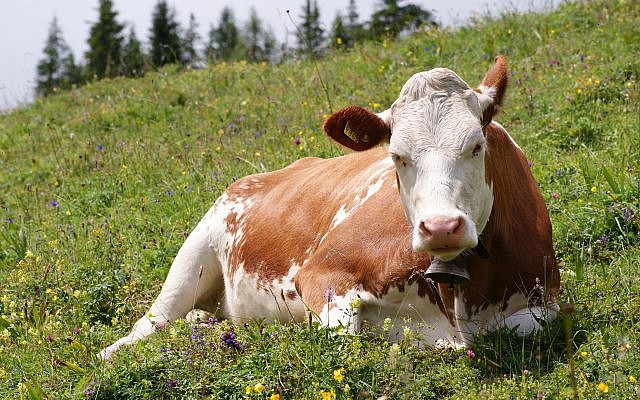 Senior Conservative parliamentarians are considering backing an MP’s attempt to reduce the levels of non-stunned animal slaughter in the UK and to introduce the mandatory labelling of kosher and halal meat.

The Tory MP Chris Loder is planning to lay an an amendment later this month to the new kept animals bill, which would be aimed at reducing the number of animals killed for meat without being stunned first.

Loder’s bid to change the law is popular with a growing number of MPs who came out in support of Brexit  and who wish to use the UK’s exit from the European Union to rewrite our regulations on the slaughter of meat, with particular focus on non-stunned slaughter.

Sources told Jewish News that environment minister Victoria Prentis and Conservative deputy leader Dominic Raab were amongst those weighing up whether to back the move.

One leading communal figure admitted they believed there was a “battle ahead” over the issue.

Advertising his amendment during a fringe event hosted by the Conservative Animal Welfare Foundation (CAWF) at last week’s Tory conference in Manchester, the MP Loder said:”There is one thing that quite often we are too scared to talk about. 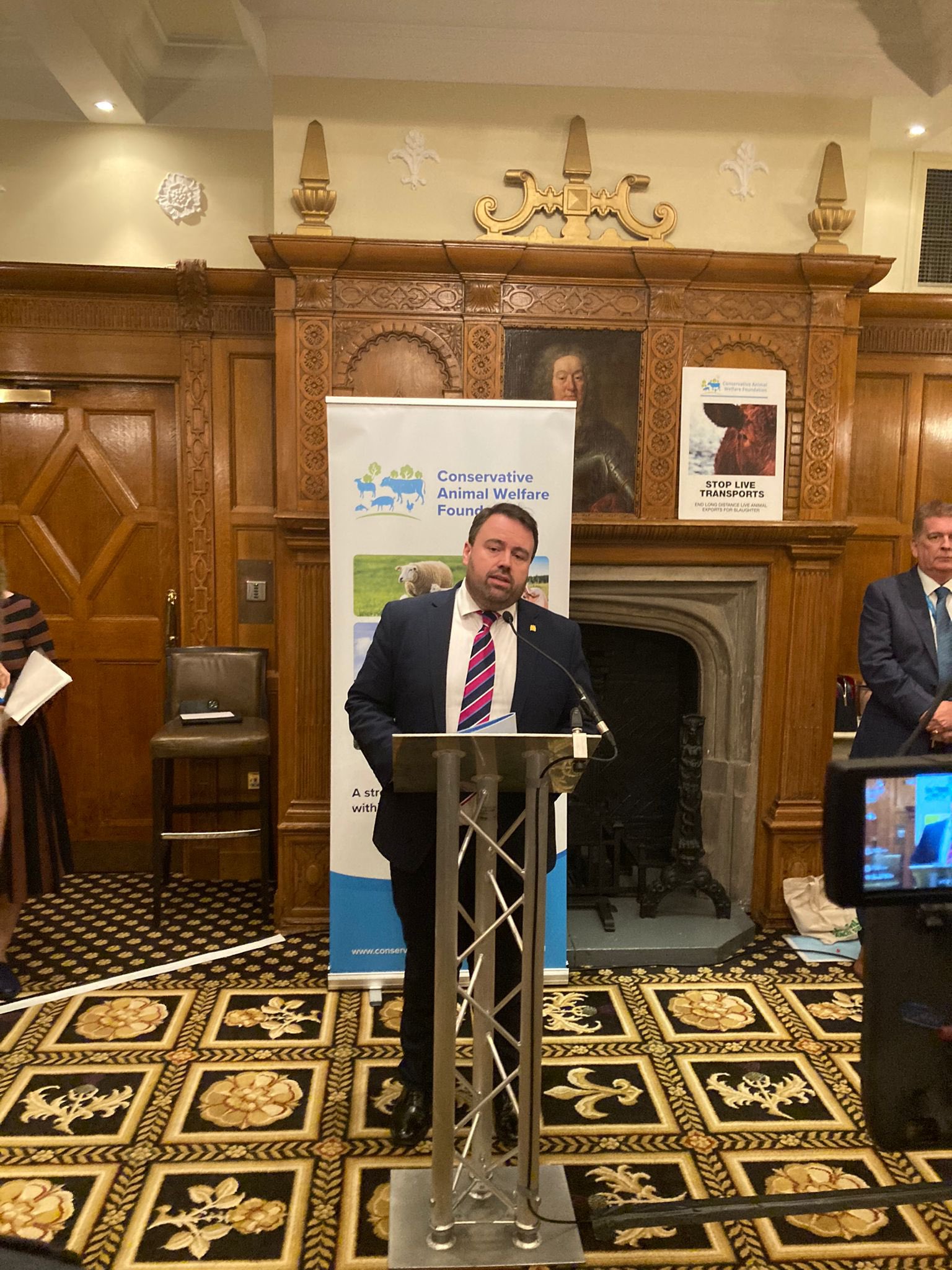 “And that is the extent of non-stunned animal slaughter in this country.” The MP’s words were greeted with approval from those in the packed room.

Loder continued:”We have an opportunity coming up to address this. I appreciate this is sensitive. I appreciate people have other views about it.

“But at the end of October we shall have the Second Reading of the Animal Welfare Kept Animals Bill. It will be the opportunity for us as MPs to discuss with the government how we can address this, and how we can reduce the absolutely disgraceful numbers of more than 93 million non-stunned slaughters each year in this country.”

He also added:”On the point of mandatory labelling it is really important when the consumer buys meat to eat they know where it comes from .. and it is also important that if animals are to be ritually slaughtered then the consumer knows that is the case. And that labelling happens accordingly.”

Also speaking at the same fringe event was former foreign secretary Raab. He told the audience of his support for CAWF and praised their campaigns as “compassionate Conservatives.”

Another speaker at the same event was the secretary of state for the environment George Eustice.

On Tuesday, the Guardian reported that environment minister Prentis had told saying there are ways of cutting down non-stun slaughter without jeopardising religious rights.

The newspaper said she had told a fringe event at last week’s Manchester conference:”We will have to make sure the rights of different religions to eat the meat they want to eat is still available. But there are ways of doing that so you slaughter to order. You don’t slaughter unnecessarily large amounts of animals without stunning. So we are determined if the bill is amended in the way that it might be to have this discussion in a sensitive and grown-up way.”

The Guardian also said Loder, who previously had a private member’s bill on animal cruelty penalties adopted by the government, would propose an amendment to the kept animals bill that would include a need to “prove there is a religious requirement” for meat to be slaughtered by a non-stun method.

He said there was an “active dialogue” with the government about addressing non-stun slaughter.

In May, another environment minister, Lord Goldsmith, indicated the government wanted to take action to cut the number of slaughterhouse animals killed without stunning. “There is a range of measures we are going to be taking,” he told the Independent. “We want to be respectful towards different religions and religious practices but we also want to tackle what is clearly an animal welfare issue.”

Meanwhile at another fringe event at last week’s Tory Party conference, Leader of the Commons Jacob Rees-Mogg moved to defend religious slaughter after an audience member openly raised the prospect of the government introducing the labelling of kosher and halal food to help consumers know how the meat they purchased was killed.

Rees-Mogg told the event: “I think religious freedom is very important and I think in a world where relations between various religions can sometimes be quite sensitive – the Labour Party has had a particular issue with antisemitism –  one does not want to do anything that would seem to be directed against a particular religion.”

The Conservative supporting radio presenter Iain Dale had earlier called for the “complete ban” of halal slaughter – but he refused to comment on his view of kosher meat.

The Jewish method for kosher meat – shechita – requires a non-stun slaughter method. Under the practice, the animal is not stunned before its throat is cut and the blood is drained from the carcass. Religious groups in favour of the method argue it is humane.

Animal rights campaigners have long campaigned for an outright ban on animal welfare grounds, but the government did not include changes to non-stun slaughter in recent animal welfare bills.

Shimon Cohen, campaign director of Shechita UK, said the group had “repeatedly received reassurances from the government that shechita will be protected in the United Kingdom and are confident that the government will consult fully with religious communities before any new measures are announced.” 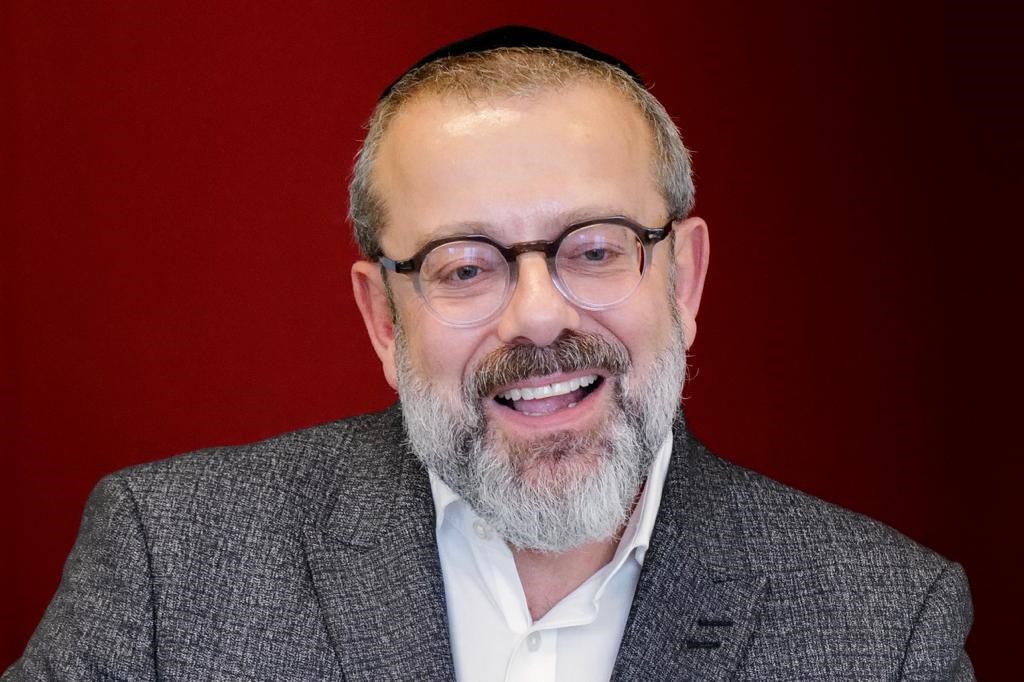 Emma Slawinski, director of advocacy and policy at the RSPCA, said the charity was “opposed to non-stun slaughter and we’re calling for an end to the practice as it seriously compromises animal welfare”.

Last moth the government announced the start of a consultation process over possible food labelling reforms for animal welfare reasons.

Shechita UK’s Cohen said that with regard to food-labelling “it is extremely important that any label is honest and non-discriminatory, as if this was not the case it could lead to an inadvertent deception of the consumer and an affront to faith communities.”

He added:” With regards to slaughter, one dimensional labelling such as ‘stunned’ or ‘non-stunned’ would be innately pejorative and misleading to the consumer.

“It would advance the myth that mechanical, industrialised stunning is an all-encompassing, animal welfare panacea. It is not. Mechanical stunning methods which include captive bolt devices, firearm with free projectile, electrical stunning, electrical water-bath stunning  and asphyxiation by gas all cause pain and distress to the animal. They also frequently go wrong, leaving the animal in even greater, prolonged agony.”