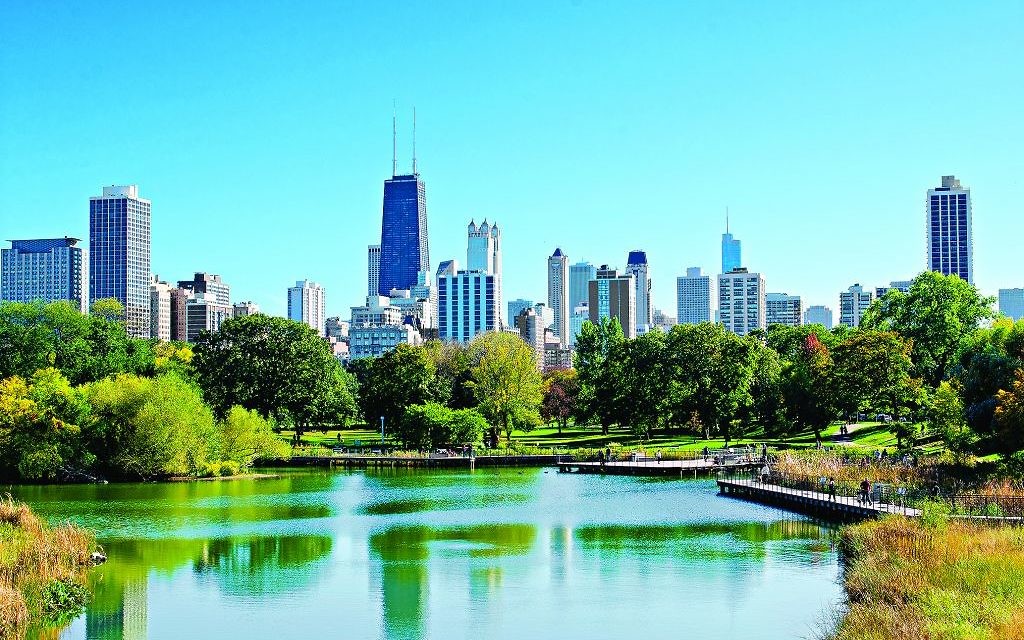 Chicago, the windy city – in December? You’ll freeze, everyone advised.

So, packing our snow jackets and boots, we set out to prove them wrong, intending to stroll the Wacker Walk, which tracks the Chicago River, and discover the city’s fascinating historic and contemporary architectural gems.

As a recce, we ascend the remarkable 1,800 feet-a-minute lift up to 360 Chicago, the observation deck at the 1,506 feet John Hancock Center. The main attraction here is Tilt, the scarifying floor to ceiling windows which angle to 30 degrees outside the building. Gazing south, we glimpse the river insinuating itself between canyons of concrete, steel and glass, an aerial history of the skyscraper – the word was invented in Chicago – and the focus of our next day’s walk.

The following morning, we trace the river towards Michigan Avenue Bridge, with the crystalline art deco pyramid of the Prudential, a mini dead ringer for New York’s Chrysler Building, prominent on our left. Next door sits the monolithic slab of the Aon Center, so good they built it twice – initially in Italian marble and subsequently, buckling owing to Chicago’s temperature fluctuations, re-encased in granite. 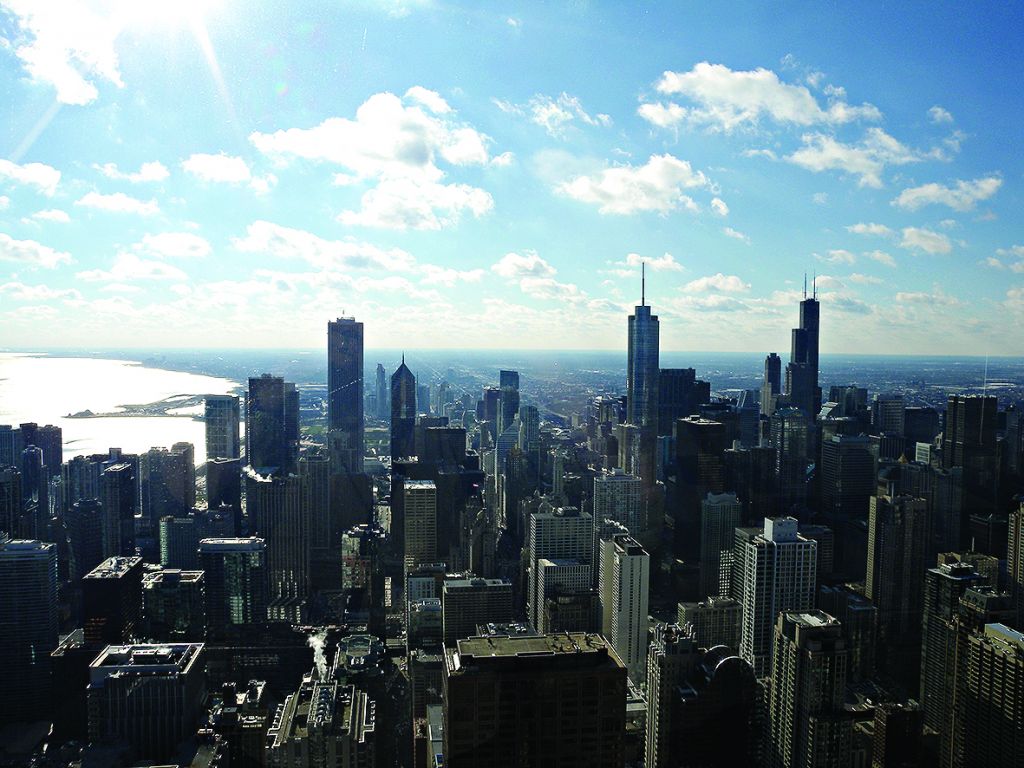 A glance to our right reveals the ‘Magnificent Mile’, Chicago’s glitzy shopping hub and the destination for numerous expeditions curated by my wife. Two 1920s icons face each other here. The Chicago Tribune Tower won a competition for “the world’s most beautiful office building” and, with its filigree crown and flying buttresses echoing France’s great Gothic cathedrals, few would disagree.

Opposite is the iridescent, terracotta-clad Wrigley Building, commissioned by the chewing gum magnate William Wrigley Jr and eulogised by Frank Sinatra, its six shades of white intentionally graded to increase in intensity the higher you go.

Crossing the river to Wacker Drive, there’s the Jewelers’ Building, a 17-storey tower plonked onto a 24-storey base, capped by a belvedere – three buildings in one, originally with elevator-accessed garages on each of the first 22 floors for Chicago’s security conscious jewellers.

The iconic corncobs towers of the Marina “city within a city”, Merchandise Mart (the world’s largest commercial building), Mather Tower’s shard as the city’s narrowest skyscraper, and the river-green 333 West Wacker, reflecting and paying homage to the living waterfront’s curvature – each of these, and many others, have their own story to tell. 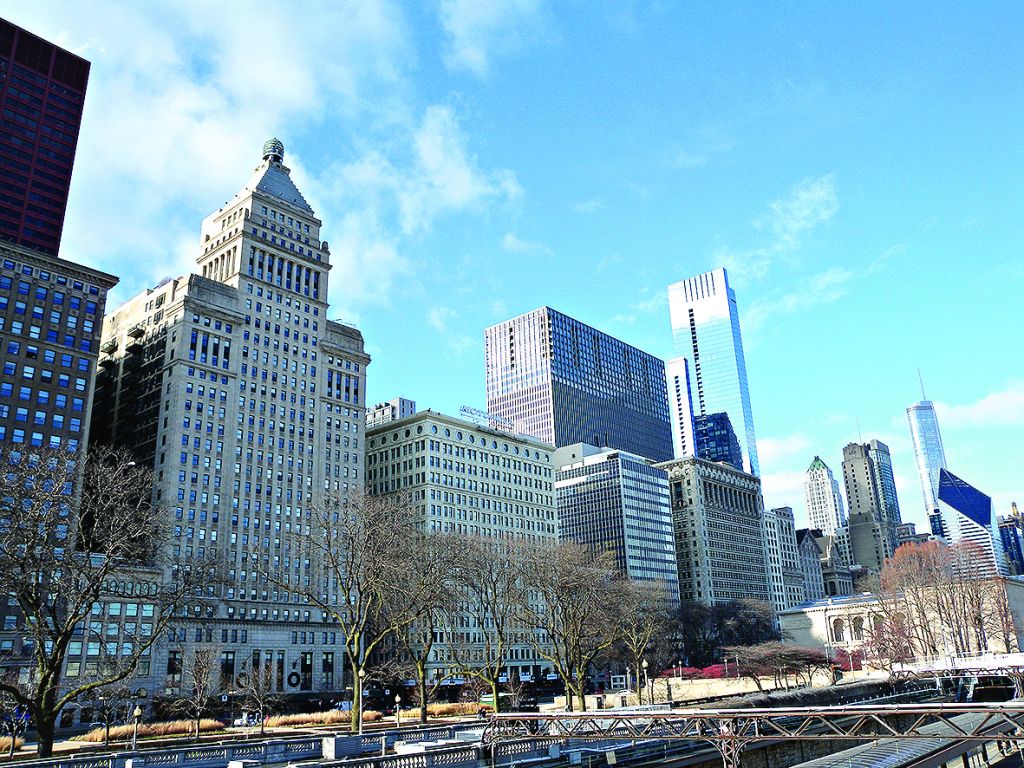 Furthermore, a whole new dimension is revealed in dusk’s coral glow or when the buildings sparkle and shimmer after dark.

Our lunch stop is at Macy’s, so the walk entails a slight detour south of Wacker Drive into historic State Street. Built in 1892 as an Italian Renaissance palazzo, its Walnut Room was the first restaurant opened in a department store.

A steaming bowl of squash soup is recommended for ramblers coming in from the cold.

After lunch, we wheel away from Downtown towards Navy Pier and the shores of Lake Michigan, visiting Milton Lee Olive Park. This contemplative green headland, jutting out above the breaking waves, offers a breathtakingly spectacular panorama of the golden Chicago skyline, a bracing contrast to Wacker’s city hubbub.

I admit, it was fingers-stuck-to-the-camera cold during the walk, but the sheer magnificence of the surroundings gets you through, warming the soul and permeating the body.

Jewish interest is provided by the Illinois Holocaust Museum. An hour out of town in Skokie, it’s well worth the detour. The Karkomi Permanent Exhibition traces the history from pre-war Jewish life, through the ghettos and concentration camps, to freedom and reintegration, documented by period photographs and artifacts (including a rail carriage of the kind used in the deportations). There’s also an art gallery (reopening next autumn) featuring contemporary responses to the Holocaust and other genocides, together with “contemplative spaces” throughout the museum, where visitors can process and reflect on what they’ve seen.

After the war, Skokie had the largest per capita population of Shoa survivors outside Israel, leading to the museum’s creation.

Time it right and you could have supper at one of Skokie’s kosher restaurants. Better still, get to Milt’s BBQ for the Perplexed in the elegant suburb of Lakeview. More than just a restaurant, this is a self-styled “gathering place”, featuring speakers and establishing a Memorial Fund as part of its community programme.

With 100 percent of its profits donated to charity, this is kosher dining with conscience. The waiter having assured us that “our smoked meats are cured onsite”, we can vouch that the chicken and brisket were to die for and this is without doubt the place to be if you’ve never sampled smoked chicken soup.

Chicago is also well endowed with many lively pizzerias and rustic Italian trattorias.

Our downtown Chicago base was the Sheraton Grand, with spacious, airy lounges and a beautiful swimming pool overlooking Lake Michigan. Request a room on a high floor with a river view and you can forget the TV – all you need do of an evening is to pour a glass of Sauvignon Blanc, put your feet up and savour the skyline’s hypnotic glitter.

Barry stayed at the Sheraton Grand Chicago (sheratonchicago.com) where rooms start at £152 per night. British Airways (britishairways.com) flies from London Heathrow to Chicago from £313 one way.