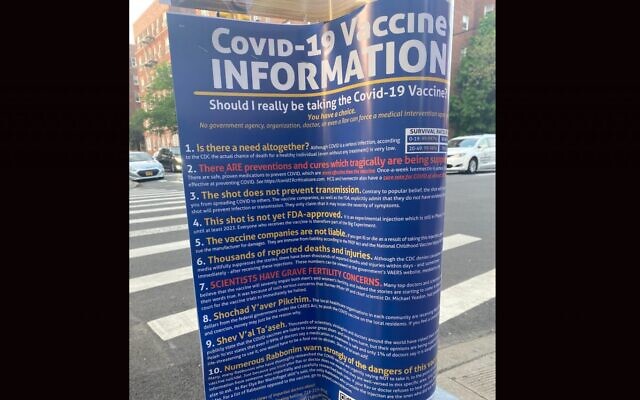 A poster encouraging people not to get COVID-19 vaccines in an Orthodox neighbourhood of Brooklyn.

With summer coming and COVID-19 vaccines being deemed safe for children as young as 12, some summer camps in the USA are talking about the possibility of being mask-free for vaccinated campers.

But one Jewish camp being planned for the summer is taking a different approach: barring any vaccinated camper or staff from attending at all.

Advertisements for Camp Hikon, planned for upstate New York, appeared on email listservs popular in the Orthodox Jewish community just days after a private school in Miami made news for discouraging teachers from getting the vaccine and telling children they were not to have contact with vaccinated people.

The camp’s announcement also comes as posters encouraging people not to get the COVID-19 vaccines appeared in Midwood, Brooklyn, the Orthodox neighborhood where one member of the founding team runs a natural foods store.

The developments suggest that anti-vaccination sentiment and COVID misinformation are taking new forms in Jewish communities where scepticism and non-compliance with public health regulations has been relatively high.

Camp Hikon is aiming to prepare yeshiva boys for what it calls the “political, environmental and economic” changes to come. Despite its stated interest in preparing campers for “natural disasters,” it will not allow any vaccinated campers or staff to attend.

Naftali Schwartz, the Brooklyn-based self-described “health coach” with no formal training in medicine or public health who is launching the camp, said the rule is unlikely to keep anybody away.

“Because of the kinds of demographic that I’m drawing from, most people who are coming will not have taken the vaccine,” Schwartz told the Jewish Telegraphic Agency.

Drawing on a debunked theory spread by the anti-vaccination movement, the camp’s website cites the “experimental nature” of the COVID-19 vaccines. According to the false theory, living in close quarters with vaccinated people could “enhance” the spread of the coronavirus. The website refers readers to a site called NutriTruth, which claims vaccines are a “biological weapon,” and to a livestreamed discussion between several notable anti-vaxxers.

“We regret that we will be unable to accept campers or counselors who have already received any of these injections,” according to the website.

“It’s also been reported to me from parents of my to-be campers that this is a real thing and it’s worrisome,” Schwartz said.

Other debunked theories were listed on posters that appeared this week in Midwood, a heavily Orthodox neighborhood in Brooklyn. The posters, which were unsigned, discouraged Orthodox Jews from being vaccinated due to potential risks to fertility (another debunked theory), among other reasons.

“Many, many Rabbonim who have thoroughly researched the COVID vaccine are urgently saying NOT to take it,” one flyer read, using the Yiddish word for rabbis.

The flyer included a link to an online pamphlet with the names of rabbis who have allegedly come out against the coronavirus vaccines. It also promoted medications for the treatment of COVID such as hydroxychloroquine that studies have shown to be ineffective. The medication had been promoted by Dr. Vladimir Zelenko, an Orthodox physician who, until last summer, worked in the Hasidic enclave of Kiryas Joel and whose treatment protocol was promoted by Donald Trump when he was president.

The online pamphlet claimed that people did not die because of the coronavirus. “They died either from lack of proper treatment of corona, or from other neglect or improper treatment at the hospital,” the pamphlet said.

Anti-vaccine sentiment is persistent in pockets of the Orthodox Jewish community, which suffered from an outbreak of measles in 2019 after a child who had traveled to Israel spread the disease among other unvaccinated children in Brooklyn and upstate New York. The outbreak was brought under control after New York City’s health department imposed fines on parents who refused to vaccinate their children and threatened to close yeshivas that allowed unvaccinated children to attend. New York State ended nonmedical exemptions to vaccination requirements in schools, leading to an increase in vaccinations.

Whether Camp Hikon actually gets off the ground remains to be seen. So far, no children are signed up and Schwartz has yet to obtain a permit to operate the camp.

But he has a clear vision of what will happen there. Masks will not be encouraged at the camp; as to how the camp would fight the spread of COVID-19, campers would be treated “with an abundance of vitamin D and other prophylaxis,” according to the website.

The camp appears to combine survivalist training with Torah study. The primary goal of the camp, Schwartz said, is to prepare campers for a future in which political instability, economic instability and unusual weather events could create supply chain issues that would interfere with everyday life. Campers will build their own shelters, according to the website, and the camp plans to provide special footwear intended for survival settings.

“We’re catering to a demographic of families that are awake, who understand that the years in the future will not be similar to years in the past,” Schwartz said.