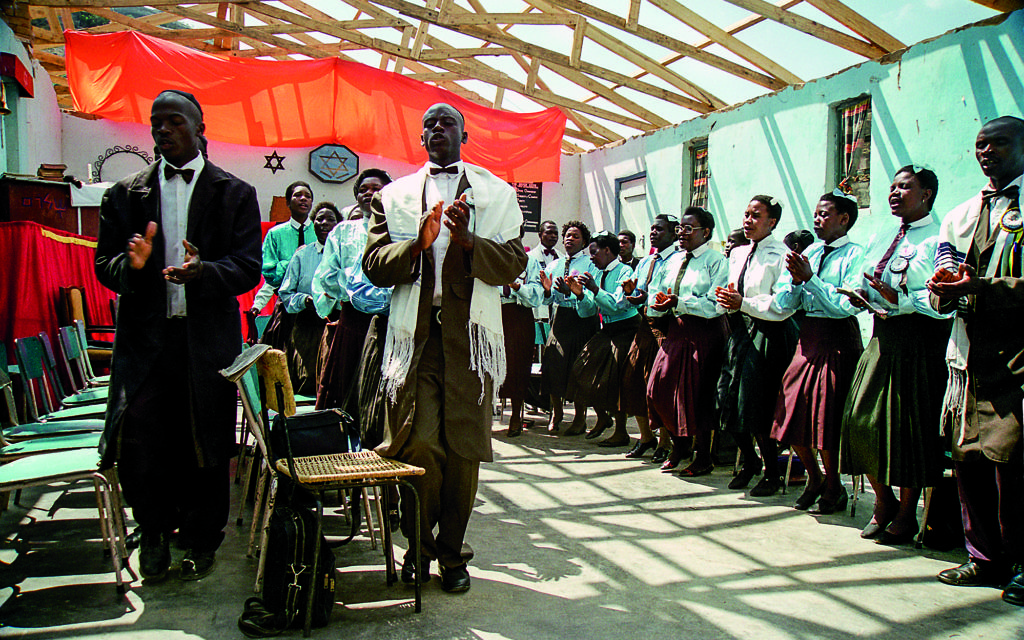 There’s an old Jewish joke about a man named Sam Goldstein, who stumbles upon a synagogue in Singapore and is amazed to find services held in Hebrew and Chinese. The Chinese rabbi greets Sam and asks if he is Jewish. Sam nods, but the rabbi replies: “Funny, you don’t look Jewish!”

A new book, Scattered Among The Nations, by Bryan Schwartz, aims to challenge people’s perceptions of what a Jew is, showing them the stereotype of the New York, London or Tel Aviv Jew “does not capture the Jewish world”.

The culmination of more than 16 years of collaboration between Schwartz and photographers Jay Sand and Sandy Carter, the book explores isolated and hidden communities, including the last Jewish shtetl in Azerbaijan, a Zimbabwean synagogue with its own Jewish gospel choir and a home on the range with Argentina’s Jewish cowboys.

Schwartz, who is a civil rights lawyer in Oakland, California, says: “I hope Scattered Among The Nations will be an eye-opening experience for readers, as they realise the breadth of the Jewish world’s diversity, shattering any stereotypes they may have… that no racial, ethnic, or socio-economic stereotype defines all Jewish people, but that many values and traditions do.”

He adds: “Jews in West Africa, or the Andes, or in India look different, dress differently, eat differently, and speak differently. Hopefully, too, it will challenge us to confront stereotypes of other non-Jewish groups, too.”

Schwartz’s interest in other Jewish communities was piqued while living in Europe during his time at law school, and he would spend Shabbat in different places with the local community, for example in Avignon, in Zurich and in London. Looking to explore further afield, he decided to visit North Africa.

David Ahenkorah looks up from praying the Mincha service in Tifereth Israel, the lone synagogue of the House of Israel community in New Adiembra, Sefwi Wiawso, Ghana, in West Africa (c) Bryan Schwartz 2001 & 2003

“I got my Lonely Planet North Africa guide and looked up ‘Jews’ in the index, and was shocked to learn about Djerba, a Mediterranean island, off Tunisia’s coast, where there were more than a dozen synagogues, the oldest Torah in the world, and a folklore about how the Cohanim from the Temple in Jerusalem fled there, when the Temple was destroyed,” he recalls.

He wondered why he hadn’t been taught about Djerba at Hebrew school and also how many other such places there must be.

“I had the idea to begin this project, to capture the multiculturalism of the Jewish world and share our beauty and diversity,” says Schwartz, an observant Jew and former president of his Conservative synagogue in Oakland, Temple Beth Abraham.

Schwartz teamed up with Sand, whom he had known through BBYO while at secondary school, after finding out Sand was visiting Jews in Africa for a book on original music composed by the communities. Needing another photographer, they linked up with Carter.

Schwartz, now aged 43 and a father-of two, was greeted enthusiastically and felt a kinship wherever he went. He travelled for three days to reach Sefwi Wiawso, in the Western Region of Ghana, where he had heard there was a Jewish community.

“They did not know I was coming, but no sooner had I disembarked and donned my kippah, than I was welcomed as a brother,” he says. “After spending time with the community there, its then leader, David Ahenkorah, took me to a new frontier of Judaism, Sefwi Sui – where most people had never met an outside Jewish visitor, or even a non-African.”

In north eastern India, the Bnei Menashe arrived en masse at the airport to greet him and Carter. “They ushered us through security and into a waiting 4×4, and proceeded to escort us to more than a dozen villages throughout Manipur in the subsequent days – including many places which never had a Jewish outsider visit before,” he says.

This was not unusual. “Communities all across the globe received me as long-lost family, and spent countless hours taking me to different parts of their Jewish worlds, sharing with me surprises and secrets.”

Different things intrigued him about each community. He was inspired by the way the Inca Jews of the Peruvian Andes had handcrafted mezuzot, and aleph-bet charts to teach themselves Hebrew, and had photocopied and were teaching themselves the Shulchan Aruch.

“I was amazed by the Marrano traditions of the Belmonte, Portugal Jews – including some of the masked Jewish holidays these celebrated for centuries – Quinta Feira de Acencao (Ascencion Wednesday) was Shavuot, for example,” Schwartz continues.

“I was moved by the sense of humour the survivors in Ukraine still possessed. I have never eaten better – or more – than during Pesach with the Jews of Krasnaya Sloboda, Azerbaijan, where every family insisted that I join them for a seder. There are hundreds of stories like these in Scattered Among The Nations.”

Some readers might be surprised by the communities that have chosen a Jewish path despite no previous Jewish roots, such as the Abayudaya of Uganda, who keep kosher, read Torah, circumcise their sons at eight days old and whose women observe their traditional laws of family purity after a local leader embraced Judaism in 1919.

Inside the 200 year-old synagogue, in Bershad, Vinnytsia, Ukraine, the community still gathers, having survived the Cossacks, the Nazis, and the Communists (c) Bryan Schwartz 2001

Even without a Jewish past, the Inca Jews feel that “their present and their future lie with Judaism, that it holds the answers for them, provides them the tools they need for a meaningful life,” explains Schwartz, who has also set up Scattered Among the Nations, Inc, a non-profit organisation to educate the world about Jewish diversity and help isolated Jewish communities to gain recognition and resources.

Some communities, for example the Bnei Menashe, who live along the India-Myanmar border and believe their forebears were among the 10 Lost Tribes, have embraced Orthodox Jewish practices and want to move to Israel. “Several communities are so devout – and so isolated – that practicing Judaism where they are currently is a great hardship,” says Schwartz.

A lack of Jewish teachers, kosher food and the ability to observe Jewish holidays makes living a Jewish life in some places extremely difficult. “The Benei Menashe also believe, as a Lost Tribe of Israel, that God needs them to return to Israel – that it is their holy destiny, their divine mission,” he explains.

I ask if Schwartz thinks the book will appeal to non-Jewish readers as much as to Jewish ones. “I do, in the same way that National Geographic’s stories on varied cultures always capture the imagination,” he explains. “For non-Jewish readers, I hope that this is paradigm-defying – that it is impactful sociologically, ethnologically, historically and artistically.”

• Scattered Among the Nations by Bryan Schwartz with Jay Sand and Sandy Carter is published by Weldon Owen, priced £40 and available now. See: www.scatteredamongthenations.org