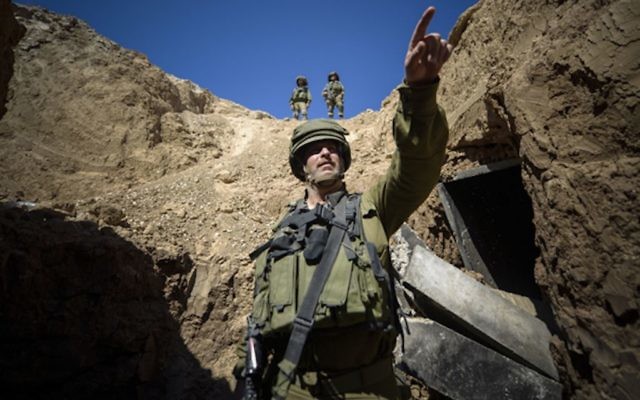 An IDF soldier in a Hamas tunnel in Rafah

An Israeli government report has laid into the Israeli army for only destroying half the tunnels identified during the 2014 Gaza campaign, concluding that it therefore “failed to achieve its objective”.

Shapira says the IDF targeted more than 30 Gaza tunnels, of which 14 crossed into Israel, with Islamist militants killing 11 Israeli soldiers near the border in ‘hit-and-run’ attacks throughout the 50-day campaign, and taking Lt. Hadar Goldin’s body.

But Shapira accused Netanyahu of withholding the true nature of the subterranean threat to colleagues in the National Security Council – a charge the PM denied.

Bennett, touted by Israel’s right-wing as a future leader, has been highly critical of Netanyahu’s handling of the war, and said he warned of the danger, but this week Ya’alon described him as “minister of leaks,” adding: “Some leak, others fight.”

Opposition politician and former foreign minister Tzipi Livni said the threat from tunnels was well-known, because eight years earlier Israeli soldier Gilad Shalit had been smuggled into the Strip after a surprise attack on his tank near the border.

Elsewhere in the report, Shapira said assessments were being made by the country’s leaders despite “significantly lacking intelligence”.

Former IDF Chief of Staff Lt. Gen. Benny Gantz said that while the intelligence was “not always perfect,” he would be “ready to go to the next campaign with the same intelligence that we had in the last one”.