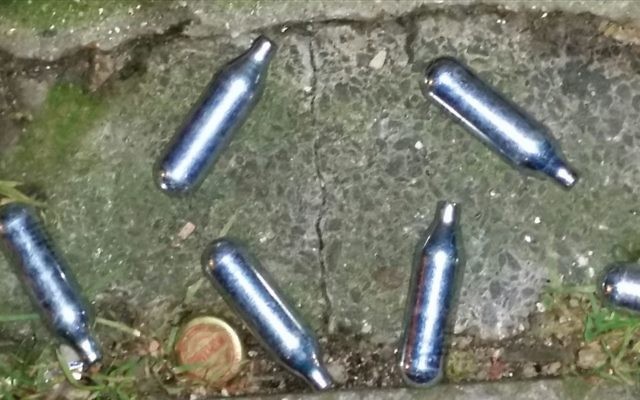 Gas canisters thrown by an an intoxicated teenager who yelled 'Heil Hitler' while pelting Jewish shoppers, has been jailed. (Photo credit should read: @Shomrim/PA Wire)

An intoxicated teenager who yelled “Heil Hitler” while pelting Jewish shoppers with gas canisters has been jailed.

Patrick Delaney claimed he bombarded four Orthodox Jews – including a 13-year-old boy – with the anti-Semitic abuse after he had fallen out with his girlfriend.

Victim Chaya Stern, who was with her teenage son, was left “very shocked” when Delaney, who was with two other men in a van, yelled “Hitler” at her repeatedly in Tottenham Hale retail park on January 6 2016.

The 19-year-old sobbed as he was sentenced to six months in prison and told his actions were unacceptable in “any civilised society”.

Prosecutor Lee Sergent told Wood Green Crown Court: “Mrs Stern heard the word ‘Hitler’ over and over again. Mrs Stern had no doubt this was directed at her and her son.”

He added: “Both her and her son were very shocked and scared.”

The pair took shelter in a nearby supermarket – too afraid to leave and face their persecutor, the court heard.

Mr Sergent said: “Mrs Stern said she tried to stay strong for her son but as they passed the van, some gas canisters were thrown through the van window at them.”

Her brother Simon Lemberger, who was out with them, received a similar volley of Nazi-related abuse as he entered a different shop.

Delaney shouted “Heil Hitler” and “Hitler is coming” as Mr Lemberger passed the gang with another Jewish man, Abraham Lew, it was heard.

When they returned to their vehicles, the yelling continued as they drove away.

In a victim impact statement, Mrs Stern said: “This incident has brought back bad memories and left me with a shocked feeling inside.

“I know it will take time to get over it. We didn’t do anything to these men, we didn’t agitate or argue with them, we were just in fact people who wanted to go shopping.”

Passing sentence, Judge John Dodd QC told the defendant: “Your conduct was simply disgraceful, any civilised society cannot allow for such conduct to be tolerated or to be considered in any sense acceptable.”

He added: “We must show, all of us, compassion towards each other and even if you do not agree with the lifestyles of others, you must tolerate them, you didn’t.”

He was said to have a previous conviction for racial or religious abuse after yelling “tandoori” and “naan” at someone while at a swimming pool in 2012.

Barry Gilbert, defending, said of last year’s incident: “He had fallen out with his girlfriend and he got very depressed about it.”

He added: “The use of nitrous oxide was to put his woes behind him for a bit.”

“As Mr Delaney is from a traveller background he has been the victim of similar abuse, it is appalling behaviour, it is disgusting,” he added.

The Jewish community were targeted at a rate of more than three times a day last year, with verbal abuse the most frequent incident reported, research from the Community Security Trust said.