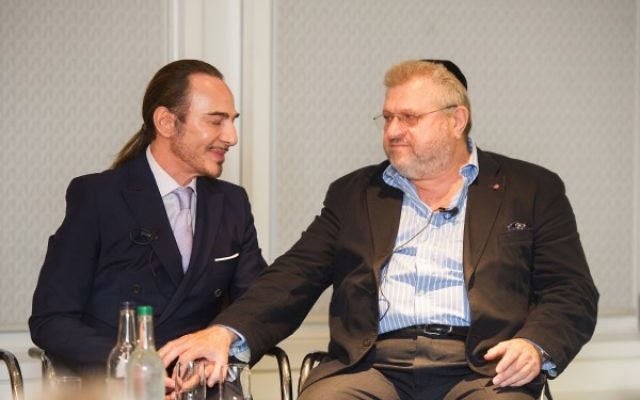 John Galliano (left) is consoled by Rabbi Barry Marcus during the emotional event. 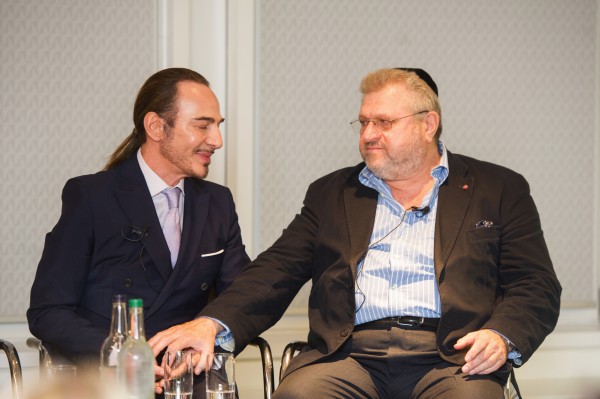 John Galliano (left) is consoled by Rabbi Barry Marcus during the emotional event.

A tearful John Galliano spoke candidly of his struggles with addiction, his faith and his public rehabilitation in an appearance at a Jewish educational event last week, and said he was now “able to reach out and forgive and ask for forgiveness” after the period of disgrace which followed his now infamous anti-semitic rant in a Paris bar.

The fashion designer, sacked by Dior in 2011 after video emerged of a foul-mouthed tirade in which he claimed to “love Hitler”, appeared at the first of the Connect series of events organised by Central Synagogue’s Rabbi Barry Marcus.

Galliano told a 200-strong audience that he took “full responsibility” for making amends with the Jewish community and thanked Rabbi Marcus – who called for the community to “show a little more graciousness” – for his “support and faith” at a time when “others have treated me as an outcast”.

The rabbi invited Galliano to shul in the aftermath of his outburst, and in January surreally rubbed shoulders with the likes of Kate Moss and Anna Wintour at the launch of his first catwalk show in four years.

He described Galliano as a “guest of honour” and as “somebody had the courage to subject himself to a long period of reflection”.

Emphasising the importance of forgiveness, he added: “just because someone is a celebrity, he should not be treated more harshly than others”.

54-year-old Galliano said: “I am an alcoholic. I am an addict” – but admitted that his alcohol abuse was “no excuse” for the anti-semitic abuse that saw him convicted of public insults by a French court.

He added: “We alcoholics and we addicts are not responsible for our disease. However, I do take full responsibility for my recovery and for making amends. I get a daily reprieve from this disease and this only achieved through total abstinence.

“I used to blame everyone for what happened, but now I bear no resentment. I’ve finally come to terms with what happened and what my part was to do with it.”

Maintaining that his drunken comments four years ago “are not views that I keep or that I believe in”, Galliano went on to speak of his experience of living in the “centre of the Jewish community” in the Marais in Paris. He said that despite rising anti-semitism in France, he had not witnessed any public discrimination or prejudice against Jews.

He also spoke fondly of sharing bagel with Holocaust survivor Harry Olmer, and said that his experience made him realise that “god is in the driving seat, not me”.

“Before it was self will, and now I realise that it’s god’s will. And that has made a huge amount of difference.”

The Gibraltar-born designer admitted he “would be dead” had he not been forced to leave Dior and that he was “back in touch with the spiritual path” through “prayer and meditation” after an enforced break from a high-intensity career in which he “wasn’t living”.

Galliano was a controversial choice for Central, Western Marble Arch and New West End Synagogues’ joint Connect initiative – whose founders Cantor Steven Leas and Rabbi Sam Taylor promised “contentious, out-there, modern thinking” and “to challenge, to stretch our notions, our preconceived ideas, and to learn in different ways” – but was praised for reaching out to the community and apologising publicly.

He contrasted the designer’s public contrition with the more hardline stances of public figures such as actor Mel Gibson and former MPs George Galloway and David Ward.

Appointed MBE by the Queen for services to Holocaust education, the rabbi joked that Galliano was “now responsible for designing kippot for Central Synagogue, and in his spare time dabbles a little bit in fashion”.

He said: “Most of you have probably said something in your lives that you regret.”

“How many of you here would like to be reminded daily of the mistakes that each and every one of us make? Does anyone really relish being reminded of a slip-up, of a mistake?”

“On Yom Kippur, on our day of atonement, we ask the almighty and we expect atonement. So my challenge and my question is: can we not as Jews extend that to others?”

Despite Galliano’s reputation for flamboyant catwalk appearances and outspokenness, he revealed that he was a “shy person” who struggled with the party lifestyle of the fashion industry.

The Martin Margiela creative director received several rounds of applause from the audience during a panel discussion in which he appeared alongside Molton Brown founder Carol Burnstein and Israeli designer Ronit Zilkha.

Topics of discussion included religious influences on fashion design and whether the fashion industry is reflective of society as a whole – with Burnstein attracting a complaint from an audience member after referring to “coloured” models.

Other sessions held on the night’s theme of fashion included talks on being frum and fashionable and biblical clothing.

Connect returns to the Baker Street offices of accountancy firm BDO on June 24th, when keynote speaker Professor Peter Neumann will present on the theme of terrorism.