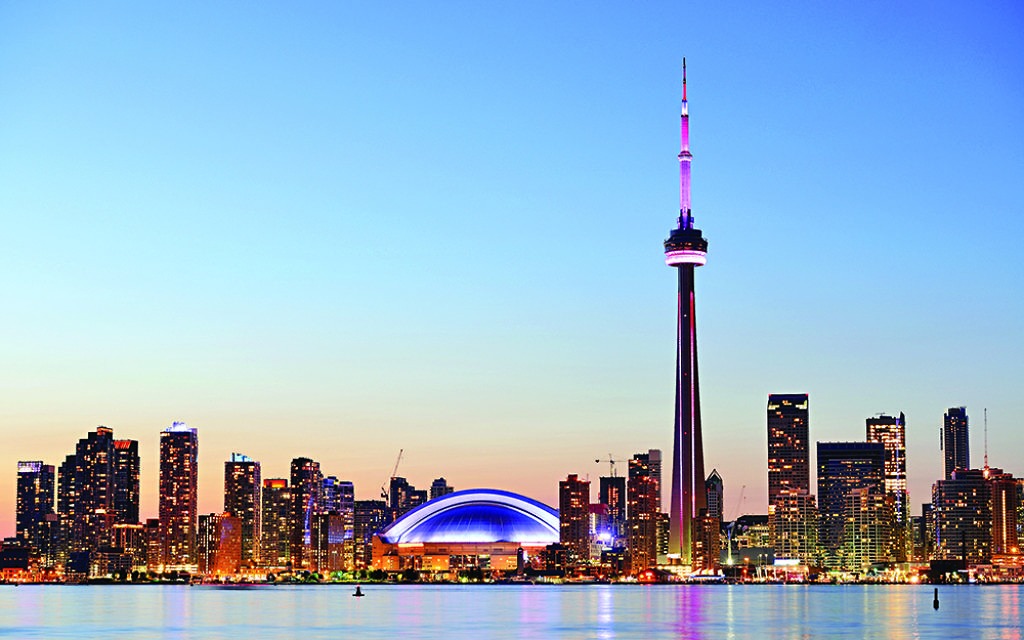 From a soaring lakeside vantage point to the majesty and power of Niagara Falls, Lucy Daltroff explores a thriving Canadian city and the attractions nearby

We were revolving slowly in the CN Tower looking over Canada’s largest city, Toronto, when my husband said in an uncharacteristically poetic way: “It’s just like a concrete and glass fashion show – we can see all the individual skyscrapers all trying to stand out from the crowd with all sorts of differing colours, shapes and materials.”

It was true, though his description did not quite convey the beauty of all the aspects of the view as we witnessed a full 360 degrees of daylight descending gradually into night.

We had arrived that morning and had taken the impressive new Union Pearson Express train, which runs every 15min from the airport to downtown. It takes a mere 25min and so cuts the journey time by more than half compared to the incredibly cheap (but tedious) bus-and-underground alternative.

The following day, our walking guide, Richard, took us east of the centre to visit the cobbled pavements and old industrial buildings of the Distillery District, which have now been turned into edgy bars, attractive cafes and retail boutiques, including “Soma”, a famous chocolate shop, where sadly I did not have enough time to linger.

On the way, it was necessary to take a few detours because of building work. Apartments and offices are going all over the place.

Incredibly, nearly half of Toronto’s population of five million were born in other countries and although immigration has taken place from all over the globe, the two top departure points are South Asia and China.

The city is also a corporate hub and the centre of a healthy economy – hence the building work – and these factors are bringing change, turning this city on Lake Ontario into a booming new metropolis with a real buzz about it.

The Theatre District is huge, coming third after London and Broadway and owing a lot to legendary Jewish entrepreneur Ed Mirvish, who first set the ball rolling when he bought the Royal Alexandra Theatre.

Later, with his son David, he operated Mirvish Productions, which in the 1980s became known in the UK as the saviour of London’s Old Vic.

A host of luxury hotel brands are moving in too. Our stay in the centrally-located Ritz-Carlton, with its unusual cheese cave and excellent service, was a case in point. The top-floor club lounge was available any time we needed a snack or cocktail and I have to admit being mesmerised by the glitzy bathroom mirror of our en suite, which doubled-up as a television set.

It was while walking around Toronto that we discovered the Bata Shoe Museum, now celebrating its 20th anniversary and a treasure trove of historic, cultural and society stories about footwear. One exhibit, a Vietnam soldier’s boot, was a revelation. On the underside is an impression of a Viet Cong fighter’s shoe pointing away from the direction being taken by the American. This meant US reconnaissance missions could be conducted without leaving misleading and incriminating footprints.

There was also an exhibit of a Halizah shoe. This is still worn in some Orthodox Jewish circles when a man has the bootlaces symbolically undone by the wife of a dead brother, signifying that she releases him from having to marry her.

Toronto has the largest Jewish population in Canada at nearly 200,000. Not everyone associates with the community but approximately 20 per cent are Orthodox, 40 per cent Conservative, 35 per cent Reform and the remainder non-denominational. The two main influxes of immigration recently have been from South Africa and the former Soviet Union.

The Miles Nadal Jewish Centre is in the hub of what was the textile industry and hosts all sorts of activities. It has a school, childcare facilities and a fitness centre and is a venue during the popular Jewish Film festival. Not far away is the Minsk synagogue, founded by poor Jewish immigrants from what is now Belarus.

The 1930 structure is in Kensington Village, once a thriving Jewish community, but now the main Chinatown – it was a first for me to see a synagogue surrounded by quite so much Dim Sum. The building was restored after an uncharacteristic 2002 arson attack and is the only Orthodox synagogue in downtown with daily services.

A visit to Niagara Falls is a must, of course. It takes 90min to drive there and Hornblower Cruises has recently won the franchise to take tourists right up to the falls in Canada, creating a healthy rivalry with Maid of the Mist, it competitor over the border on the US side.

Being so near such a vast expanse of moving water is unbelievable and it seems almost as if there is a film backdrop behind the boat, until you hear the noise and feel the spray. We also had the privilege of taking a helicopter flight – seeing the falls from such a height, and the waters rushing towards it, puts the whole landscape into context and is an outstanding experience that is well worth doing.

A few miles down the road from Niagara are some of the best vineyards of Canada. We visited one, the Inniskillin Winery, where delicious, sweet ice wines are the speciality. Sadly, as there is zero tolerance on drinking and driving, only one of us could try the produce.

The following day we had a 3hr drive to the second part of our holiday, a stay in one of Canada’s national parks, the giant Algonquin, a quarter the size of Belgium.

Our destination, 20min down a small track, was the long established resort of Arowhon Pines. It was heaven, but definitely not for those addicted to mobile phones or computers, as wi-fi is not encouraged.

The cabins are simple and the meals delicious, all served in a round wooden dining room overlooking Joe Lake.

Canoeing, swimming and, if you are lucky, moose spotting are all available. I had never heard of a rare bird called the solitary sandpiper until we saw one, alone of course as it name suggests, as we canoed down a remote creek.

En route to the airport, our last adventure was a visit to Sainte Marie Among the Hurons, a fortified missionary settlement established in 1639 by French Jesuits to try to covert the local Huron (Wendat) people to Catholicism. The site has been reconstructed to show exactly how the Jesuits lived, until they themselves burnt the settlement down 10 years later. It’s a good way to get an insight into the area’s history and, for us, an interesting end to our trip to the state of Ontario.