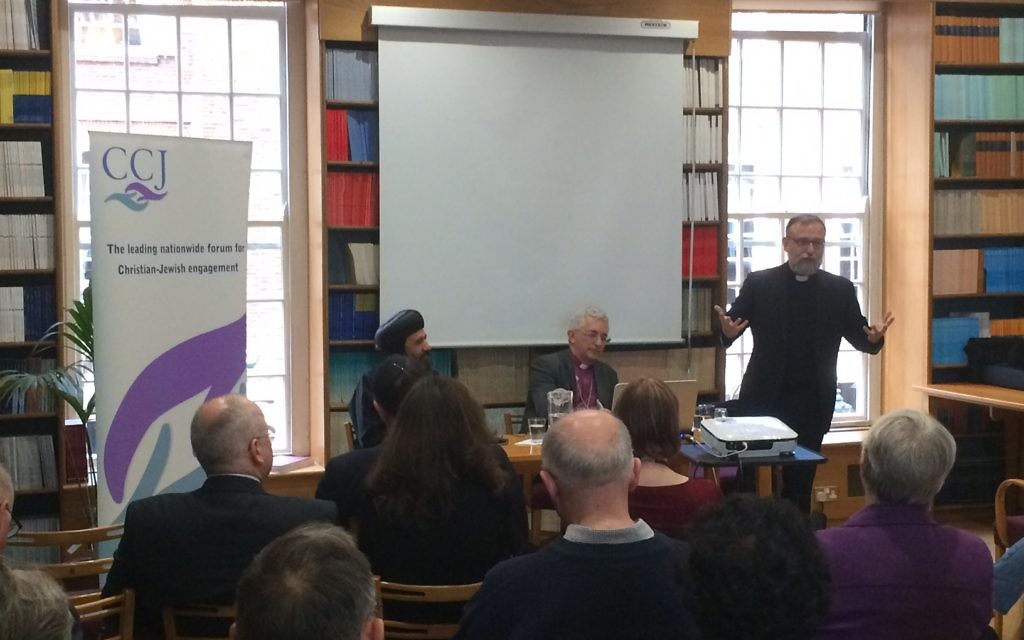 Angaelos speaking during the event

Pleas for action over Syrian minorities were heard from Christian leaders this week.

Two senior leaders from the Coptic and Anglican churches gave testimonials of their experiences, and appealed for dialogue and peace at the Council of Christians and Jews’ (CCJ) ‘If Not Now When?’ initiative.

Marking the start of National InterFaith Week on Monday, the initiative provides opportunities for education on the situation of minorities in Syria, Iraq and Libya.

The audience of over 50, including members of the Jewish community, heard testimonies from Bishop Angaelos, General Bishop to the Coptic Orthodox Church in the UK and Father Nadim Nassar, a Syrian who is Director of the Awareness Foundation and an Anglican Priest.

Nadim spoke of his home town, Latakia, to which he frequently returns. He said of his home country: “The fabric of Syrian society is breaking. We need to pray. We need to act.”

Although he praised the ‘If Not Now When?’ initiative, he added it should additionally say ‘If Not Us then Who?’, adding that those working in interfaith, dialogue and conflict resolution should see themselves as ‘Ambassadors for Peace.’

Bishop Angaelos said “we need to pray for people with hearts so hard that they see other people as a commodity…and we need to pray that good hearts aren’t changed” for the worse by what they’ve seen.

He emphasized that “we can be different but we cannot be divided.”

They spoke about the minorities in Syria, the terrorist attacks in Paris on Friday, which killed 129 people, and the attack in Lebanon which killed over 40 people, also informed the discussion.

‘if not now when?’ seminar

Phil Rosenberg of the Board of Deputies attended the event, and told Jewish News: “I would like to commend the Council of Christians and Jews on this timely and important event, and their wider If Not Now When campaign.

Because of our history, I think the Jewish community is particularly sensitive to their predicament. For those that do choose to leave, I would urge people to look at supportrefugees.org.uk to see how they can help.”

Rabbi Jonathan Wittenberg of Masorti Judaism, who also is a CCJ President attended, as did other rabbis and representatives of Christian denominations, interfaith Leaders and members of the Muslim community.

The event was chaired by Rt Revd Michael Ipgrave, Chair of CCJ,