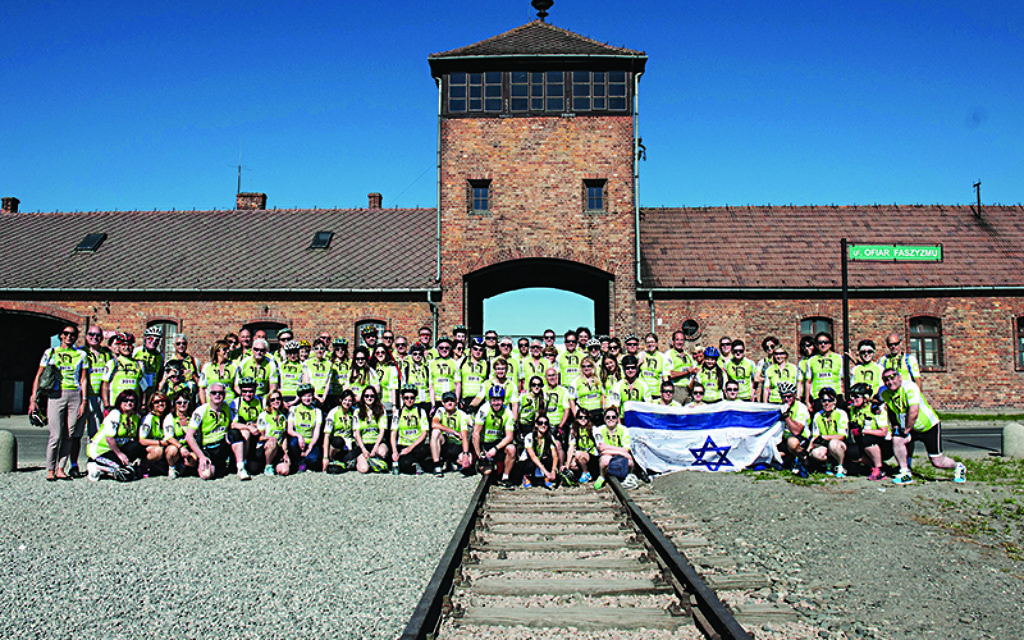 Emma Burns took part in World Jewish Relief-JCC Krakow’s Ride for the Living, a cycling trip with a difference that aims to raise money to help Holocaust survivors. Together with riders from across the world, both Jewish and non-Jewish, the trip was a fitting testament to the survival of the Jewish people…

Marcel Zielinski was aged just 10 when he was liberated from Auschwitz-Birkenau. Cold, starving and exhausted, he somehow walked 50 miles back to Krakow where he lived before the war.
Seventy years later, Marcel was back at Auschwitz. He, like me, was taking part in the second annual Ride for the Living. We spent a day touring Auschwitz – the death camp where more than a million Jews were exterminated – before riding the next day to Krakow’s Jewish Community Centre (JCC) and celebrating with a Shabbat dinner.

As 85 of us huffed and puffed our way to Krakow, Marcel led the way. “When riding my bike felt tough, to look up and see Marcel leading at the front gave me the strength to continue,” said Matthew Stein, one of the participants. “This experience will stay with me forever.”

The ride was inspired by Robert Desmond following his 1,350-mile bike ride from London to Auschwitz in October 2013. After settling in Poland, he became an active member of JCC Krakow. He
realised that his ride should not have ended at Auschwitz, a place of loss, but at the JCC, a place of hope, and set about creating the Ride for the Living with the JCC’s executive director, Jonathan Ornstein.

Marcel embodied this message. Now aged 80 and living in Canada, he joined us on this ride from a centre of Jewish death to a centre of Jewish life. “The most important thing for me was to do it for those who rode, especially the young people, to see that somebody who survived the Holocaust is able to do it,” he said.

In 1942, Marcel and his family were forced into the nearby Plaszow labour camp and, in the summer of 1944, were deported to the death camps. Marcel managed to survive both the Gross-Rosen and Auschwitz-Birkenau concentration camps.

On his return to Krakow, he was taken in by an orphanage as he could not find his family. A few months later, his mother found him. He never saw his father again.
As we walked round Auschwitz, Marcel, with his tattooed identification number visible on his forearm, pointed out the place where his mother had spotted him through a barbed wire fence and called out his name. He thought this would be the last time he would see her.

The next day, we stood outside the gates of Birkenau in our cycling gear. It felt inappropriate, disrespectful somehow, but as Rabbi Avi Baumol – the JCC’s rabbi – spoke, his words allayed our fears.

He told the story of the former Chief Rabbi of Poland, Rabbi Yoskovich, who returned to Poland in the 1980s to rebuild Jewish life after communism fell. When asked why he chose to come back to his native land having escaped the Holocaust, he replied that when he was in the ghetto he had seen a neighbour being hanged by the Nazis, who said, just before his murder: “Avenge my blood.”
The rabbi vowed to do just that. “The way we avenge the blood of our loved ones is to come back, to rebuild and to show that we, the Jewish people, cannot be wiped off the face of the earth,” Rabbi Baumol told us. “We are still alive and thriving. Today, on this ride, we are fulfilling that vow.”

We set off, leaving the destruction and despair of a horrendous history behind us to explore the miraculous rebirth of Jewish life in Poland today. Our group was made up of riders from the UK, America, Canada, Germany, Israel and the local Polish community, both Jewish and non-Jewish: a fitting testament to the Nazis’ failure to wipe out the Jewish people.

Perhaps because we had a new-found appreciation for life, everything seemed so beautiful. We cycled through quaint tree-lined streets, along the calm river as birds flew overhead, through field after field of stunning countryside, forming special bonds with other riders from across the world.

We approached the JCC over a breathtaking bridge suspended across the Vistula river, lit up against the night sky. In single-file, Marcel led us over the bridge and into the rapturous applause of the crowd as we entered the gates of the JCC.

Our legs ached, but the group was rightly proud of raising £100,000 to enable the JCC and World Jewish Relief to support Holocaust survivors.

Richard Frank, World Jewish Relief’s fundraising chairman summed up the ride well: “There we were, at the gates of hell, in the company of a man that the Nazis failed to destroy, with his wife, children and grandchildren. We were free to leave these gates, to ride to the JCC and celebrate being alive.”

World Jewish Relief is arranging a non-biking visit to Auschwitz-Birkenau and the JCC. For further information on this trip or on next year’s Ride for the Living, call Samantha Martin on 020 8736 1250