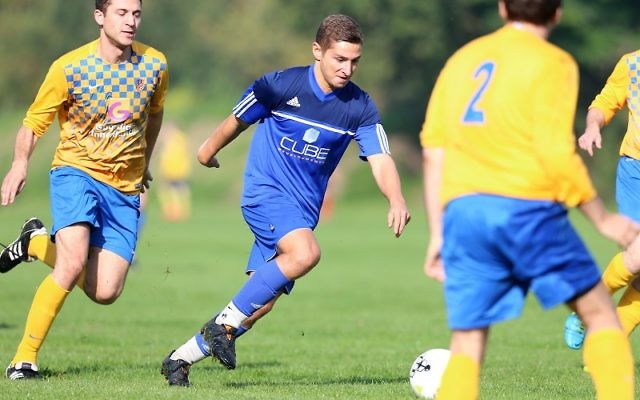 Redbridge Jewish Care B maintained their 100 percent record as they turned in a very professional performance against a hard working Los Bloncos side.

RJC B started off very quickly and went into an early lead, when Sam Sollosi glided past three defenders, and finished clinically to put the hosts 1-0 up.

The second goal soon followed, and was a great a team goal. Involving four brilliant first-time passes with Adam Goldman, Joe Jordan and Sam Sollisi all involved, the move was finished with a simple tap in by Sollosi.

RJC B were completely dominating the game, with RJC B goalkeeper Scott Shear wishing he brought his deck chair down for the day.

RJC B went into a 3-0 lead, when the ball was won in midfield, before a lofted sand wedge pass by player-manager Sam Rank found the captain Brad Gayer, who drove at the Blancos defence, with his deflected shot going past the Blancos keeper.

The RJC boys continued with the pressure and made the score 4-0, when a good move involving Daniel Bean and Joe Jordan, was finished confidentially by the marauding Jordan. Four become five when another RJC B attack was stopped when Bean was brought down on the edge of the box. The resulting free-kick being tucked away impressively by  Jordan.

With a minute to go off the half, a rare attack from Los Blancos produced a lifeline, when Dan Andrews brought down the Blancos striker. The referee pointed to the spot, but Shear, determined to keep his clean sheet, did just that as he produced a world class double save from the penalty and rebound. Dan Andrews was spotted in Deliphone bagel bakery after, buying a few for Scott Shear as a thank you.

At half-time the score was 5-0, and the game was near enough over. RJC B introduced their four substitutes to freshen things up, with Sollosi rushing to the hospital to see his new little nephew – Rocco Sollosi. (We wish the family big a Mazeltov, and I’m sure Rocco will be playing in an RJC shirt one day.)

The RJC B boys started to dominate again, and returning player Sam Moss was put through one-on-one and clinically finished, to give Sam his first goal of the season for RJC. Jordan then finished a well-worked move, to give him a very deserved second hat-trick of the season.

A goal of the week contender was then scored by Ryan Cole. Picking up the ball around 30 yards out, he curled an unstoppable effort into the top right hand corner, which three goalkeepers would have struggled to keep out.

The icing was put on the cake, when the tireless worker Adam Goldman scored directly from a corner.

Player-manager Rank said: “We had a 100 percent record to look after, and we dealt with this pressure in a very professional manner. It’s still there and if the players keep the same focus, commitment and attitude, I hope we can keep this going the whole way, as it would be some achievement.

“I would also like to say, Los Bloncos today, had a lot of players missing due to the Fast of Tevet, and they still managed to bring 13/14 players. This is a real credit to them. With other teams forfeiting games in the MGBFSL. if teams would take the same attitude and commitment as Los Bloncos, less games would be forfeited.”