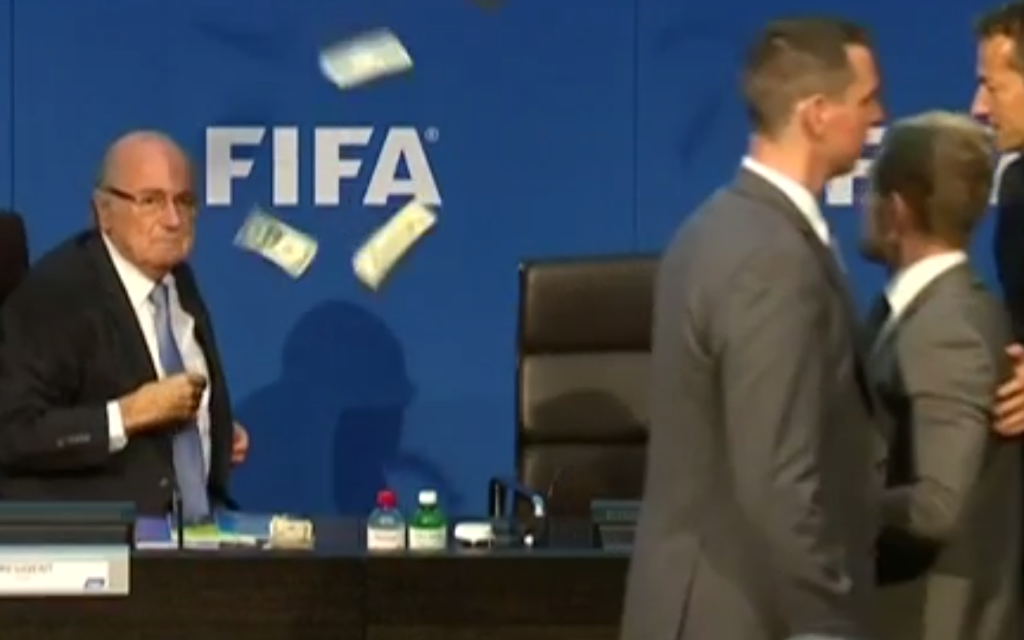 Prankster Simon Brodkin was arrested for trespassing after storming in to Sepp Blatter’s press conference and showering the Fifa president with money.

He was released after being questioned by Swiss police yesterday evening, and will be charged for trespass in the coming weeks but is unlikely to be jailed for the offence.

A spokesman for Zurich City Police Department said: “We arrested this man and he was interrogated and released yesterday. He will be charged for trespassing because he wasn’t allowed to enter the building.

“If there will be a trial is still to be decided by the prosecutor. Trespassing is in Switzerland just prosecuted by request like other minor crimes.”

Brodkin was seen being taken away by police after the stunt, but found time to tweet a photo of himself gatecrashing the event from the account @Jason9Bent shortly after the incident.

He wrote: “Excited to be at Fifa meeting Sepp Blatter to secure the North Korea 2026 World Cup.”

The comedian – in his character of Jason Bent – barged in front of 79-year-old Blatter and laid down a wad of cash during the conference in Zurich on Monday.

Mr Blatter could be heard calling for his security, before Brodkin was led away.

On his way out, Brodkin, who uses the stage name Lee Nelson, threw another bundle of notes at Mr Blatter, saying: “Here you go Sepp.”

Mr Blatter was heard saying that the stunt “was not about football” before stepping out of the room for a short time.

It was not the first time that the comedian had shown up at an event without an invitation.

During rapper Kanye West’s headline set at Glastonbury, Brodkin appeared on stage as Nelson wearing a T-shirt with “Lee-Zus” on it before being removed by security.

This was again followed by him posting a photo on his Twitter account, accompanied by the message: “Some people were saying Kanye shouldn’t headline Glastonbury so I thought I’d give him a hand.”