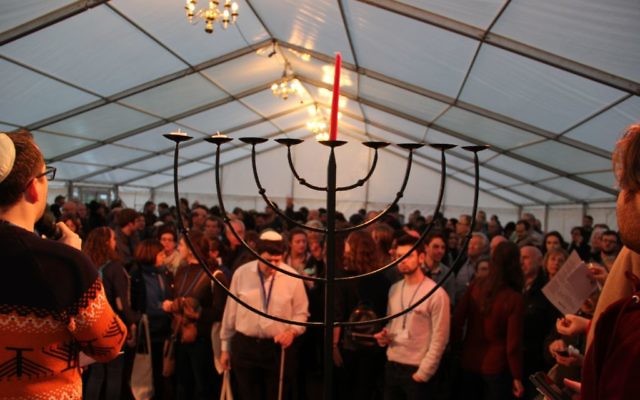 Hundreds of Russian-speaking Jews from across Western Europe are spending the weekend in Windsor for a Limmud conference.

The event — the first held in Western Europe by the Limmud FSU group for Russian-speaking Jews in the former Soviet Union and beyond — drew 650 participants on Friday to the plush De Vere Beaumont Estate Hotel in Windsor.

The broad spectrum of speakers slated to attend the event, whose focus is the Balfour Declaration’s centennial anniversary, include Berel Lazar, a chief rabbi of Russia who is affiliated with the Chabad movement, and Misha Kapustin, a Reform rabbi from Crimea who left the area in 2014 to Slovakia following its occupation and subsequent annexation by Russia from Ukraine.

The roster of guests and speakers from Israel is equally diverse, ranging from the left-wing Knesset member Merav Michaeli, a liberal member of the Zionist Camp party, to David Bitan, a senior member of the Likud ruling party.

From the United States, guests include Matthew Bronfman, a philanthropist and chair of Limmud FSU’s International Steering Committee, and historian Deborah Lipstadt, whose legal fight in London against the Holocaust denier David Irving is the subject of the acclaimed film “Denial,” which premiered in the UK last week.

Western Europe has some 300,000 Russian-speaking Jews, according to Limmud FSU founder Chaim Chesler. Most settled there after the collapse of the former Soviet Union in 1991. The majority of them live in Germany, but setting up the first Limmud FSU Europe conference was easier in the UK due to organisational issues, a spokeswoman for Limmud FSU said.

“The plan is to make Limmud FSU Europe an annual event, moving it to additional destinations in Western Europe, including Germany,” said the spokeswoman, Natasha Chechik.

Founded in 2006, Limmud FSU has annual events in over a dozen cities annually, including in Ukraine, Russia, Belarus, Israel, the United States and Canada.

The previous large-scale event for Russian-speaking Jews in Western Europe took place in 2012 in the Netherlands, where the Jewish Agency for Israel brought together more than 200 Russian-speaking young Jews for a conference about Israel.