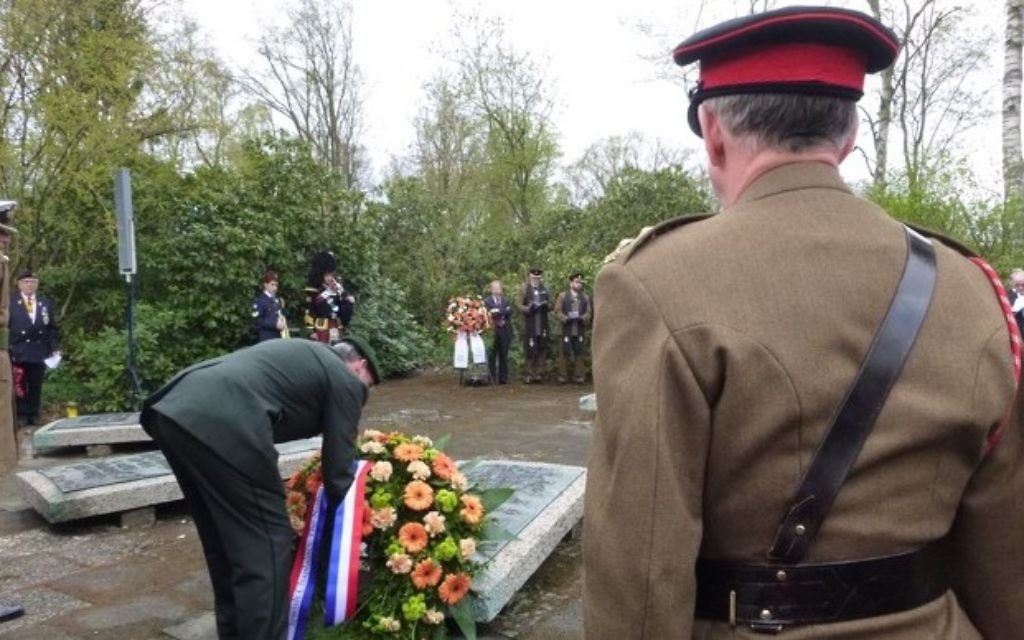 By Martin Newman, A British army officer, who was commissioned as a reserve officer in 1975 and currently serves as Colonel Commandant of the Royal Gibraltar Regiment’s Cadet Force.

A party of Jewish servicemen and women and AJEX veterans from the UK made history last weekend.

They joined forces with Jewish Armed Forces personnel and veterans from the Netherlands, Germany and the USA to commemorate the Liberation of Belsen Concentration Camp by soldiers of the British 2nd Army.

The field grey of our German Jewish colleagues was however worn more casually in contrast to the obscene regimentation of the former occupiers of this camp, once the headquarters of Hitler’s SS.

The day was gloomy and the rain torrential. Uniforms were soaked but it seemed churlish to complain when you consider the suffering that people had endured on that very site.

This was an international service attended by the Federal President of Germany, The Duke of Gloucester, politicians, ambassadors, British and foreign military and Jewish communal leaders from many countries.

The crowd moved from the main arena to the Polish Cross and finally to the Jewish memorial where a short service was led by the Chief Rabbi and Padre (Rabbi) Reuben Livingstone, the senior Jewish chaplain to HM Forces.

This was particularly significant as it was probably the first time that a British Jewish chaplain in uniform had conducted a memorial service on this very spot since Padre (Rev) Leslie Harman buried the poor souls who perished in this evil place.

Perhaps the most significant part of this emotionally challenging day for our troops was the military drumhead service arranged by the Armed Forces Jewish Community and AJEX to mark Britain’s part in the liberation.

Held later in the day at a Jewish Cemetery located in the British Garrison of Bergen Hohne under grey skies and constant drizzle some 500 people remained behind to join our service personnel in paying their respects to those who lost their lives.

The pristine cemetery which is maintained by the British Army, is the place of rest of the many who died after liberation or who were later found in the medical centre, victims of abhorrent medical experimentation.

As a British officer I felt proud that our garrison had taken on the role of keeping this holy place in such good order and that pride only grew as we spoke to survivors who related stories of how they had been looked after by their liberators.  I haven’t often heard British squaddies referred to as ‘angels’.

The local Jewish community of Lower Saxony was also involved.

The haunting strains of a violin played by the granddaughter of a survivor preceded an address by a man who was actually born in the camp.

The Last Post added to the solemnity of the occasion followed by a lament played by the Pipe Major of the Royal Scots Dragoon Guards, as he march away from the site, the drone of the pipes fading into the distance.

Silence followed as the AJEX standards dipped in respect.  Then, as though a sign from above, the bugler sounded the Reveille, the rouse which represents the return to normality,  and suddenly the rain stopped and the sun shone through the suddenly cloudless blue skies.