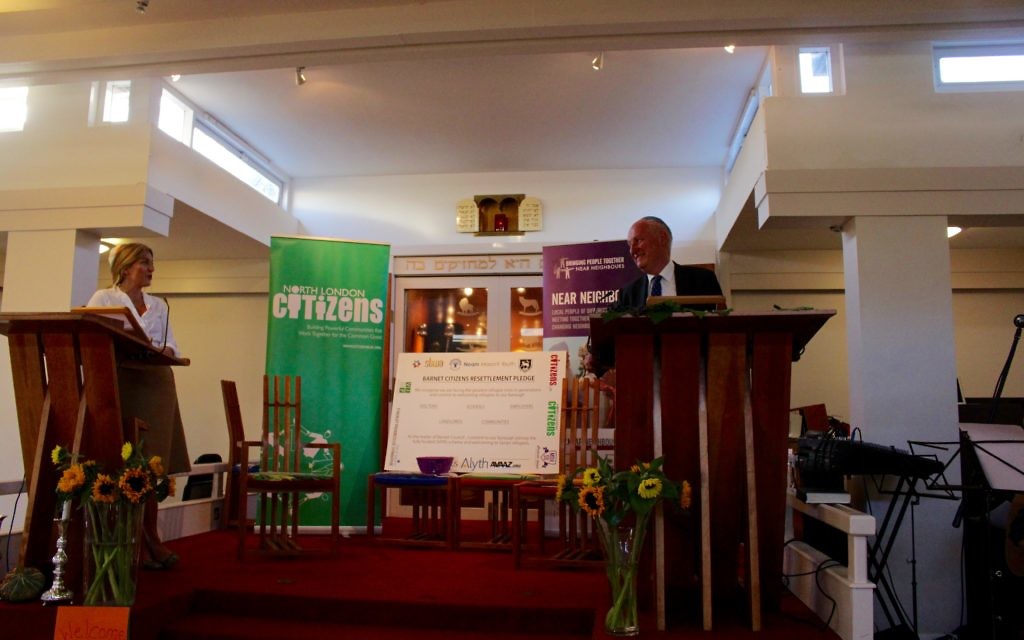 Progressive Jewish groups in north London were celebrating this week after Barnet Council agreed to resettle 50 Syrian refugees on the back of the community’s campaign.

Local authority leaders signed Barnet up to the Syrian Vulnerable Persons Resettlement Scheme after shuls used the Jewish holiday of Succot to press the need for sanctuary for displaced families.

The initiative saw Finchley Progressive Synagogue (FPS) team up with Christian and Muslim groups, including the Somali Bravanese Welfare Union and Vincentians in Partnership, as well as students from Middlesex University.

“We found local landlords and property owners to commit to allowing their properties to be used to house refugees,” said FPS member Gillian Stern. “We also organised a warm welcome, with GP and school places and everything from English classes to mum and baby meet ups.”

Under the scheme, central government meets the costs of the arrivals, for both accommodation and integration support, as well as health and education costs for 12 months from their arrival. Refugees are given ‘leave to remain’ for five years, with full and immediate access to public funds and benefits.

Rabbi Rebecca Qassim Birk of Finchley Progressive Synagogue explained that the Council can also access funding from the European Union, but acknowledged that costs were only one factor.

“We know it’s not easy for a council to say yes,” she said. “That’s why we needed local people to show their support, find homes and offer a warm welcome. Together we must act now and revive the great British tradition of helping those most in need.”

Rabbi Danny Rich of Liberal Judaism and Rabbi Danny Freelander of the World Union of Progressive Judaism welcomed Council Leader Richard Cornelius’s decision, after hosting a ‘Sanctuary Succot’ on Sunday, organised by Citizens UK, with a reminder that the holiday historically commemorates the 40 years in which the children of Israel wandered the desert, living in temporary shelters.

Look how many people are here to support @CitizensUK in asking our Council to take 50 Syrian Refugees in Barnet. pic.twitter.com/XxSXGgUMgA

On Tuesday and Wednesday, Senior Reform Rabbi Laura Janner-Klausner joined an imam from Leeds in touring the shelters temporarily housing refugees on France’s north coast, in an area which has become known as the ‘Calais Jungle’.

“A key activity of the Jewish festival of Succot is to build temporary shelters, or Sukkahs,” said a Reform spokesman. “It provides Jews with a way to engage with the issue of refugees and the fragility of the shelter afforded to those in the Calais Jungle.”