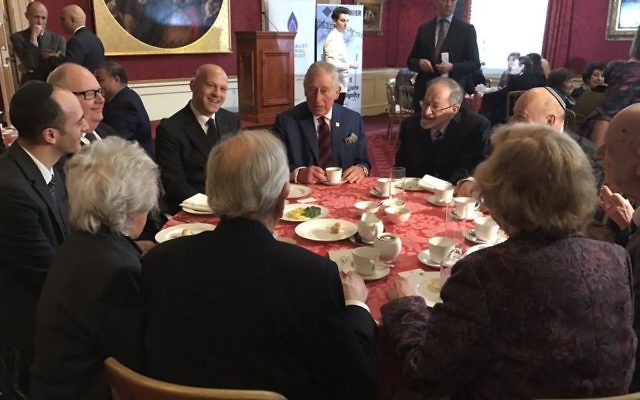 HMDT patron Prince Charles meeting survivors of the Holocaust and other genocides at St James' Palace
Prince Charles has been honoured for his work in promoting remembrance of the Holocaust after meeting survivors of the Shoah and subsequent genocides.
The heir to the throne was presented with the Statue of Remembrance by The International Auschwitz Committee during a Holocaust Memorial Day Trust reception at St James’ Palace, the latest of several gatherings of survivors he has hosted in recent years.
Maran Turski from the Committee – which presents the prize to those who promote remembrance and tolerance – told the gathering survivors were glad to have the Prince “on our side” in the fight against prejudice.
The statue takes the shape of an upturned ‘B’, a reference to the same letter in the inscription above the gates to the Auschwitz concentration camp which reads “Arbeit Macht Frei”. When prisoners were forced to build the sign they chose to place the letter upside down on purpose, the statue reflects this act of defiance.
The Prince, who succeeded the Queen as patron of HMDT this year, chatted with more than 150 survivors during the 90-minute reception, listening with great interest as many recalled their stories and how they rebuilt lives in the UK.
Sitting down at the first table, he recalled with exuberance his visit last week to Yavneh College and an address to the annual dinner of World Jewish Relief – whose  predecessor the Central British Fund helped bring children over on the Kindertransport and whose Krakow community centre was born out of his idea.
Among those to chat to His Royal Highness was Netherlands-born Martin Stern, who survived Terezin with his one-year-old sister Erica and went on to become a consultant immunologist in the UK. He said: “It bowls  me over that the prince is taking such a personal interest in people whose lives have been dynamited and went on to make a life here.
“For decades, although he has an important role in the Church of England, he has been open minded towards people of different backgrounds and promoted dialogue and peace.”
Also meeting him was the famed author Judith Kerr, with the Prince telling he had read her Tiger Who Came to Tea to his grandchildren. “He was absolutely charming and very good at what he does,” she said.
Communities Sectetary Sajid Javid told the Jewish News: “What I’m always amazed at is just how many good causes HRH supports in Britain and elsewhere and how takes each seriously. It’s important this generation learns the lessons of the Holocaust and having him involved is so inspiring, particularly for young people.”
Sir Eric Pickles, the government’s envoy for post-Holocaust issues, described the Prince as “compassionate man who has brought a real zest” to promoting awareness and remembrance. “This occasion is recognition not just of survivors but of the place of Jewish people in British society,” he added.
With the Prince having previously hosted at least two other such receptions, HMDT, the Holocaust Survivors Centre and others tried to ensure many of the guests had not previously met the Prince.
Aviva Trup, director of Jewish Care’s Holocaust survivor services, said: “The  excitement on the coach was growing as we got closer and the survivors are particularly delighted with the time the prince spent asking personal questions as well as speaking about his own family history, especially a Princess Alice who was named Righteous Among the Nations.”
HMDT chief executive Olivia Marks-Waldman said: “It’s such a thrill to have an event with so many survivors that demonstrates the highest possible commitment from the Royal family to honouring the memory and pledging to do what we can to create a safe and better world.”