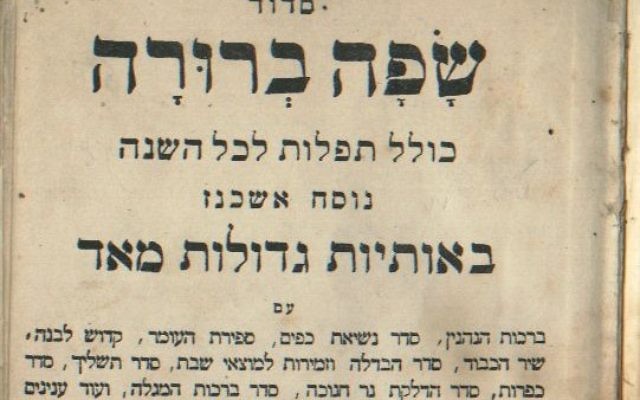 Text of a Jewish prayer book from Russia

An artist from southern Poland found a cache of priceless Jewish scripture books, including volumes from the 19th century, in a pile of garbage.

Vladimir Pietal of Rzeszow, a city 90 miles east of Krakow, recently discovered the leather-bound books waiting to be picked up with the trash near the Lubomirski Palace, the TVN 24 channel reported Wednesday. Some of the books, which contain Russian, Hebrew and Polish letters, were printed in Vilnius, Warsaw and London.

“These books came from all over the world, only to end up as trash,” said Pietal, who added that he noticed the books’ “beautifully decorated bindings” while walking near the palace with a friend whom he immediately enlisted to help carry the dozen-odd volumes.

Among the books are parts of the Chumash, the Five Books of Moses that form the Torah — nuclear text of the Jewish law and faith – and the Talmud, a compendium that for centuries has formed the cornerstone of rabbinical education on Jewish law, ethics, philosophy, customs and history.

Pietal said he will give the books to the Jewish community of Krakow or to the persons responsible for the synagogue in the nearby city of Lancut.

“I am glad that I was able to save part of the story,” he said, adding that the books show some damage but are “in good condition.”

Pietal said he did not know who threw away the books or why.

Some 113,000 Jews lived in the Rzeszow district before the Holocaust, according to the Yad Vashem Holocaust museum in Jerusalem — part of Poland’s prewar population of 3 million Jews, of whom 90 percent were killed.

In September 1939 the district came under Nazi control. The Germans established ghettos and several labor camps, and in the summer of 1942 began to systematically destroy the Jewish population. Thousands were killed during roundups and the remaining Jews were sent to the Belzec extermination camp. Others were taken to camps and used as slave laborers there.

In addition to the Jews killed in roundups, an estimated 9,800 Jewish men, women and children were killed in 378 villages of the Rzeszow region and in the nearby forests. (JTA)