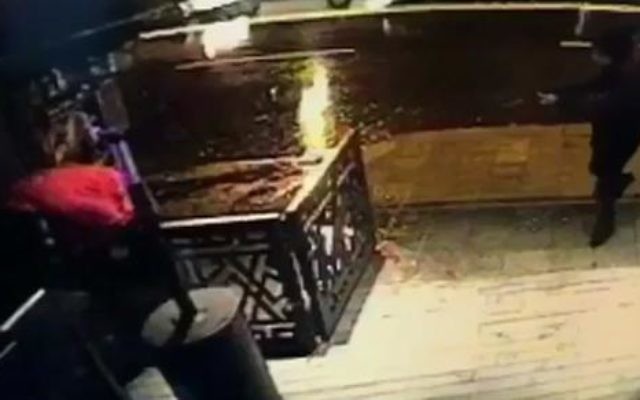 This image taken from CCTV provided by Haberturk Newspaper Sunday Jan. 1, 2017 shows the attacker, armed with a long-barrelled weapon, shooting his way into the Reina nightclub in Istanbul, Turkey on Sunday morning.

Prime Minister Theresa May has written to the Turkish president to underline the UK’s commitment to defeating terrorism in the wake of a New Year attack on an Istanbul nightclub which left at least 39 people dead – including a teenage Israeli tourist.

Police are desperately searching for a gunman who opened fire on revellers at the Reina club in the capital as they celebrated the start of 2017. Local media report that 19-year-old Israeli Leann Zaher Nasser, 19 was pronounced dead at an Istanbul hospital.

Islamic State claimed responsibility for the attack on Tuesday.

The suspect, armed with a long-barrelled weapon, killed a policeman and civilian outside the club at around 1.15am on New Year’s Day before entering and firing at will, Turkish authorities said.

Around 70 people were injured, three critically, in what is thought to be a terror attack.

President Recep Tayyip Erdogan condemned the atrocity and offered condolences for those who had lost their lives – Turkish partygoers and foreigners from Belgium, India and Lebanon as well as Israel.

Foreign Secretary Boris Johnson said he had contacted his Turkish counterpart to express condolences and support.

He said: “My thoughts are with the Turkish people after the cowardly act of terrorism in the Reina nightclub attack.

“I have been in touch with Foreign Minister Cavusoglu today and the Prime Minister has also written to President Erdogan to reaffirm our continued support to our Turkish friends in defeating extremism.

“Foreign Office staff in London and Turkey remain in close contact with the local authorities.”

British tourists in the country have been warned to take extra care in the aftermath of the attack.

The Foreign Office urged holidaymakers to follow local advice, saying: “You should exercise vigilance and caution at this time, and follow the advice and instructions of the security authorities.”

The massacre is the latest in a string of attacks in the country.

In December twin bombings outside a football stadium in Istanbul killed 44, with a Kurdish militant group claiming responsibility, while so-called Islamic State were suspected of being behind an attack on a wedding party in August that left at least 30 dead.