A protest outside Labour headquarters organised by groups opposing expulsions and suspensions for  antisemitism included a speech by Covid-denier Piers Corbyn.

Demonstrators from groups including Jewish Voice For Labour, Labour Against The Witch-hunt were joined by Jeremy Corbyn’s brother at Tuesday’s protest.

Speaking outside the Southside building in Victoria, central London, Piers initially heaped praise on Tony Greenstein – the “notorious antisemite” who was among the 100-odd activists present.

The ex Labour leader’s brother then said he was present to give “100 percent support” to those he said were “being purged from the Labour Party.”

He then added:”It’s not just for my brother – I support his right to go back into the PLP fully, and everybody who is being purged.”

Tuesday’s demo had been called to coincide with a meeting of Labour’s NEC that was expected to approve moves to proscribe at least four groups  who had repeatedly attacked attempts to tackle the party’s antisemitism problem.

As Piers continued to speak he then openly linked current attempts to tackle the pandemic with the climate under the Nazis in 1930s Germany. 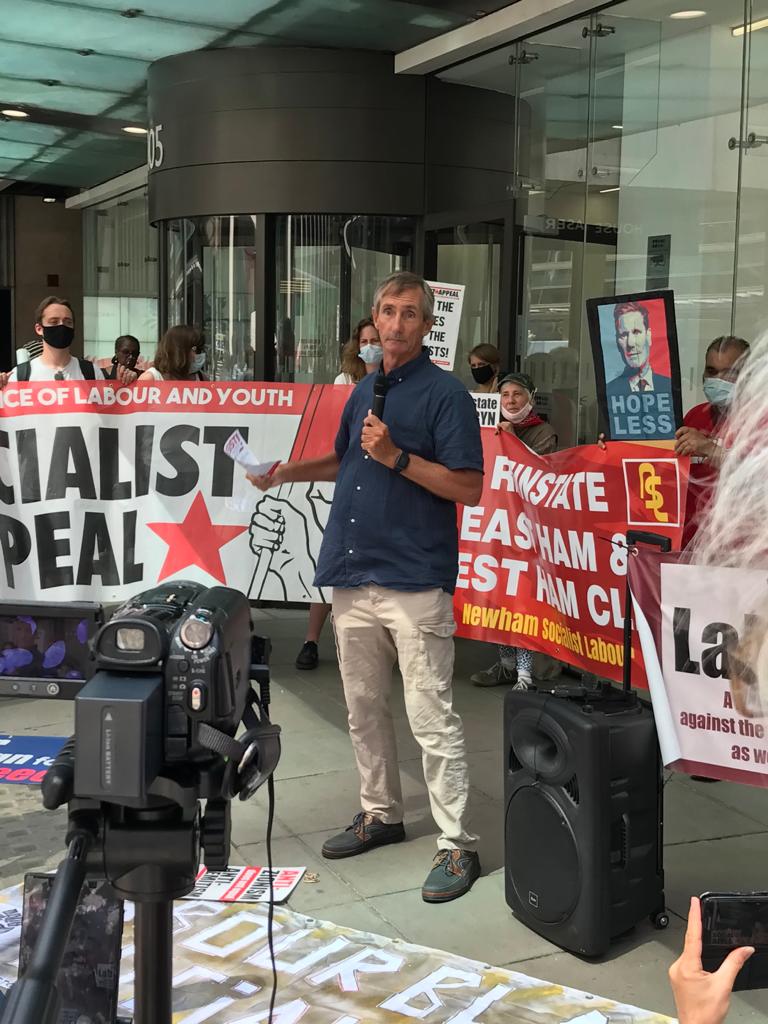 At one stage he appeared to suggest compliance with the vaccine was a replica of submission to Hilter’s Nazis.

“You know what happened in Germany.. they believed in Hitler, “ he said.

“You know what happened, the rest is history. “

Corbyn then attended that “the Jews” were “locked up” and that “the rest is ..what they were told to stay safe.”

Earlier the activists had gathered outside Labour HQ, with several clutching Palestinian flags, others holding a JLV banner.

One women carried a banner claiming “informed Jews” know that “Palestine is  occupied.”

When expelled former Labour activist Tony Greenstein spoke he claimed the demo was “just a start” and called for those gathered to put the “nail down the coffin” on Keir Starmer.

Also speaking was the Hove Labour activist Greg Hadfield who bragged about tweeting “Israel is a racist endeavour” ahead of his suspension.

He falsely claimed news of his suspension had been leaked to journalists by the party.

A stand set up by the Labour Against The Witch-hunt group including leaflets saying “Labour never had an antisemitism problem.” 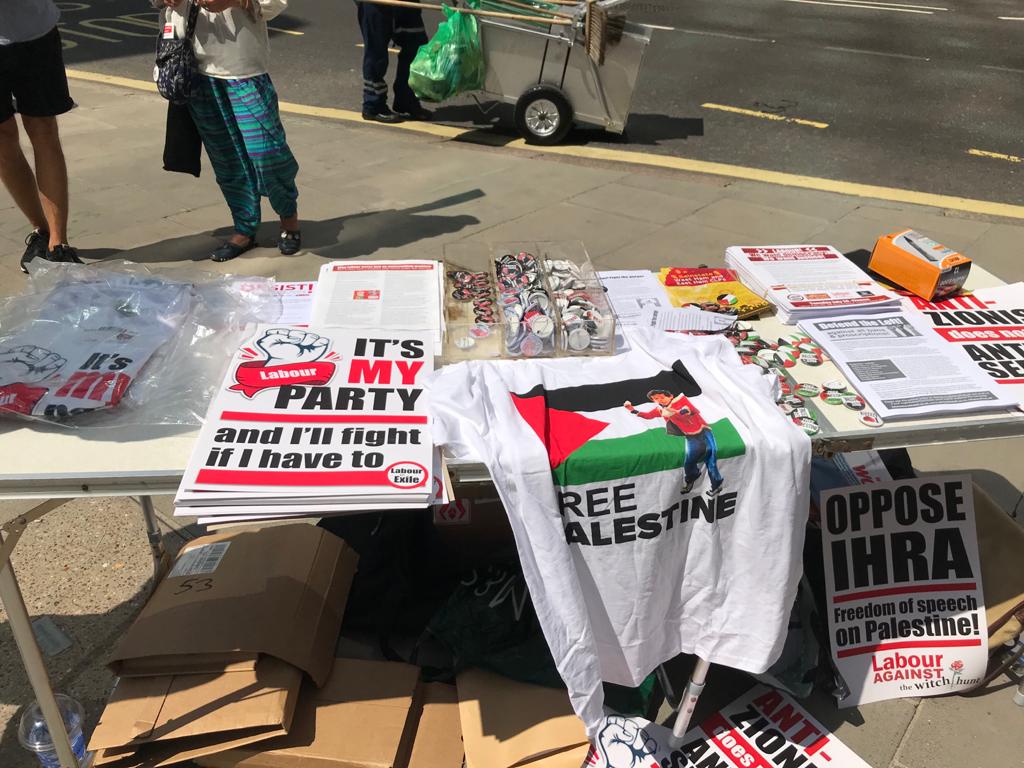 Anti-Israel posters, leaflet and t-shirts at the protest outside Labour HQ

When Piers Corbyn spoke some of the activists present attempted to distance themselves from a “Covid denier.”

Labour’s NEC are expected to approve the proscribing of four groups who have repeatedly attacked Starmer and denied antisemitism claims at today’s meeting.

Jewish News has learnt that further plans will stop those who have resigned from the party using antisemitic claims against Starmer from rejoining Labour at a later stage. 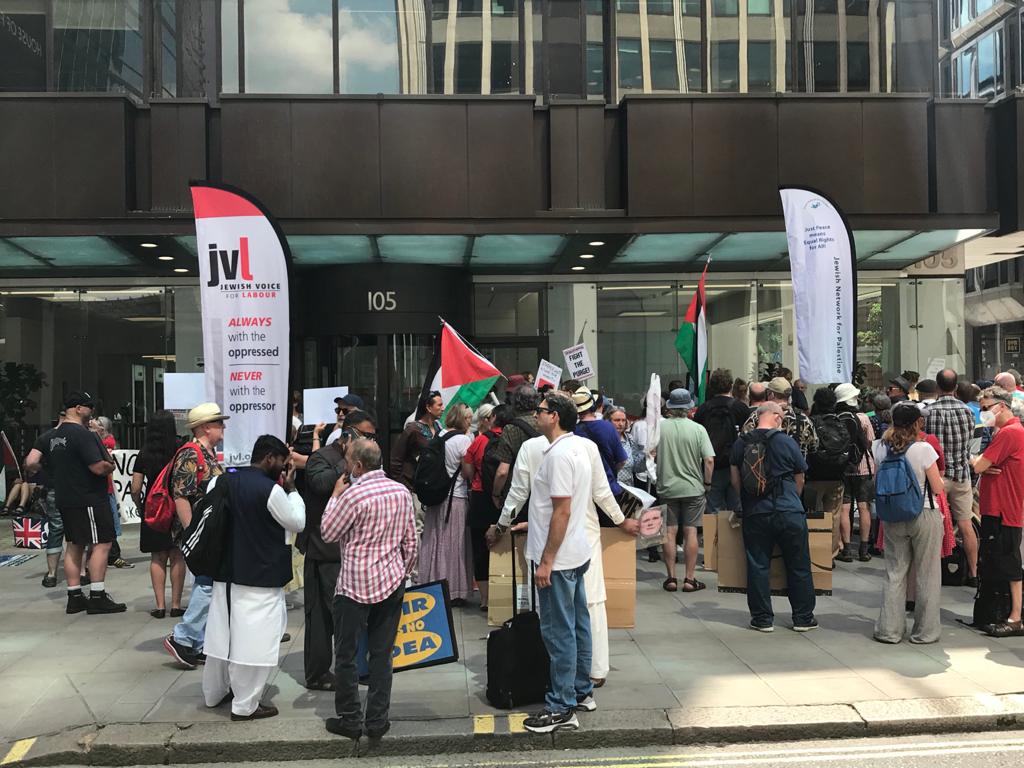 JVL banner can be seen at the small demonstration

Facebook posts from around 500 members who have resigned will be retained to show they have made claims including “Zionist” control of Labour under the current leader.

The NEC meeting is also likely to approve an independent disciplinary complaints process as recommended by the EHRC report.

A “hard-hitting” report into Liverpool Labour will also be shown to the NEC.

It will confirm claims of bullying and misogyny from local members in Liverpool.

A Labour Party source said about the protests outside party HQ today: “If you’re attracting conspiracy theorist anti vaxxers to your cause, you should probably assess what side you’re on.”