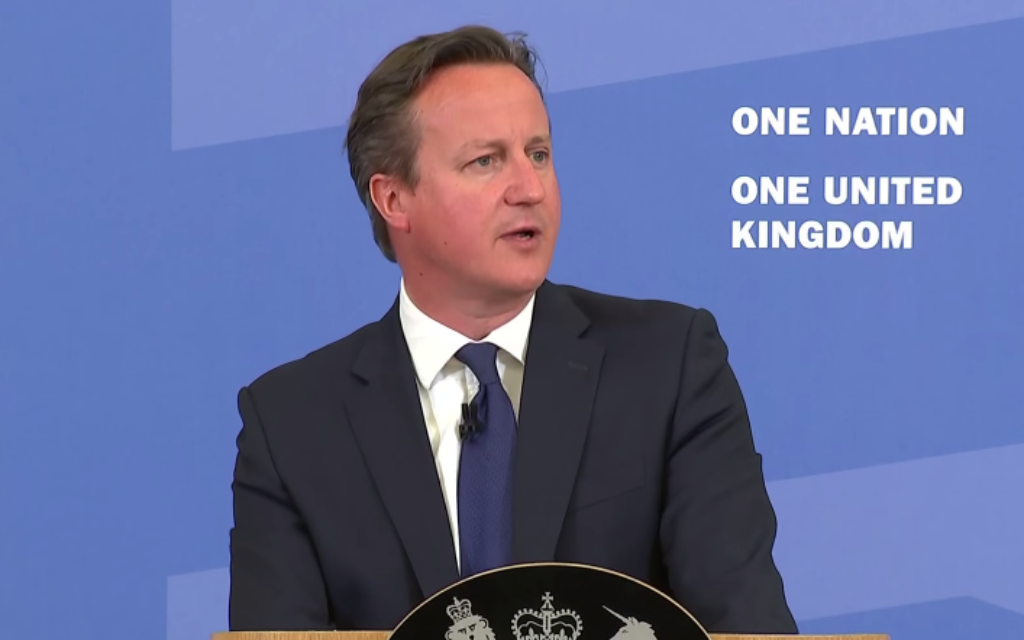 In a written statement to MPs, Mr Cameron said: "The Muslim Brotherhood comprises both a transnational network, with links in the UK, and national organisations in and outside the Islamic world.

The Prime Minister’s speech this week on extremism and integration was further proof of the government’s determination to address and tackle the root causes of jihadist terrorism and associated anti-Jewish hatred. It developed themes raised by David Cameron at three Community Security Trust’s dinners in recent years. We particularly note the inclusion of anti-Semitism as a sign of extremism, and have worked tirelessly to promote this understanding within government and Police.

On one level, Cameron’s speech provided detailed and specific proposals – too many to list here – to combat extremism and promote integration. More profoundly, though, it was an attempt to put forward a set of British values, and therefore an idea of British identity, for a modern, diverse Britain. The speech offered a vision of British society that is liberal rather than multicultural, but also inclusive and aspirational. Countering extremism becomes part of the larger work of building a better society for all who live here.

Thus the Prime Minister condemned Islamist conspiracy theories about Jews and far right slanders of Muslims, alongside a call for more minority ethnic representation in politics. He outlined proposals to restrict extremist recruitment in prisons and online, while also promising to increase efforts to tackle forced marriage and educational segregation.

At the heart of the speech was the government’s determination to tackle the Islamist ideology that lies at the root of the jihadist terrorism that has seen Jews murdered in Paris, Copenhagen, Brussels and Toulouse in recent years. This is welcome and long overdue. Anyone who has seen how Islamist extremists in Britain have proselytised about a utopian caliphate, or preached intolerant and bigoted interpretations of sharia law, will understand that some of the British Muslims who have chosen to live under Islamic State rule have done so precisely because it is so fanatical and brutal.

This is why the Prime Minister’s call for stronger efforts to challenge extremist views is so welcome. It is commonly argued that even the most hateful, extremist speakers should be heard, so that they can be challenged and their arguments dismantled. That is fine – as long as those views are actually challenged. Too often, this does not happen and the ‘free speech’ argument becomes, in effect, an argument to do nothing. Those who prefer free speech to censorship or bans need to heed the Prime Minister’s call for hateful ideas to be properly opposed.

Cameron was correct to argue that opposing extremism of all kinds should include the positive celebration and championing of Britain’s liberal democracy. Free speech, freedom of religion, the rule of law, equality for all: as we have written previously here, secular liberal democracy is the greatest guarantor of these rights for minorities. Those British Jews whose families found refuge here in previous generations know this all too well.

This speech also reached out to British Muslims in a positive way. The Prime Minister acknowledged that Muslims make a “profound contribution” to Britain, are proud to be Muslim and British, and that they hate the damage done by extremists as much as everyone else. Significantly, he acknowledged the role racism and bigotry can play in persuading young British Muslims (and people from other minority ethnic backgrounds) that they have no place in British society.

His call to work together to build our shared society is in line with CST’s core values that underpin our collaborative work with similar organisations from other communities.

CST has repeatedly explained that antiSemitism and belief in conspiracy theories are part of the same extremism threatening British society in general, and we are pleased to see that this is now part of the government’s thinking.

The Prime Minister made explicit the connection between anti-Semitic conspiracy theories and the extremist world view: “No-one becomes a terrorist from a standing start… It may begin with hearing about the so-called Jewish conspiracy and then develop into hostility to the West and fundamental liberal values, before finally becoming a cultish attachment to death… We must demand that people also condemn the wild conspiracy theories, the anti-Semitism, and the sectarianism too. Being tough on this is entirely keeping with our values.”

We could not put it better. Condemning and opposing anti-Semitism, bigotry, extremism and hatreds of all kinds are also in keeping with CST’s values and we will continue to play our part in combating extremism and helping to build a better society for all.