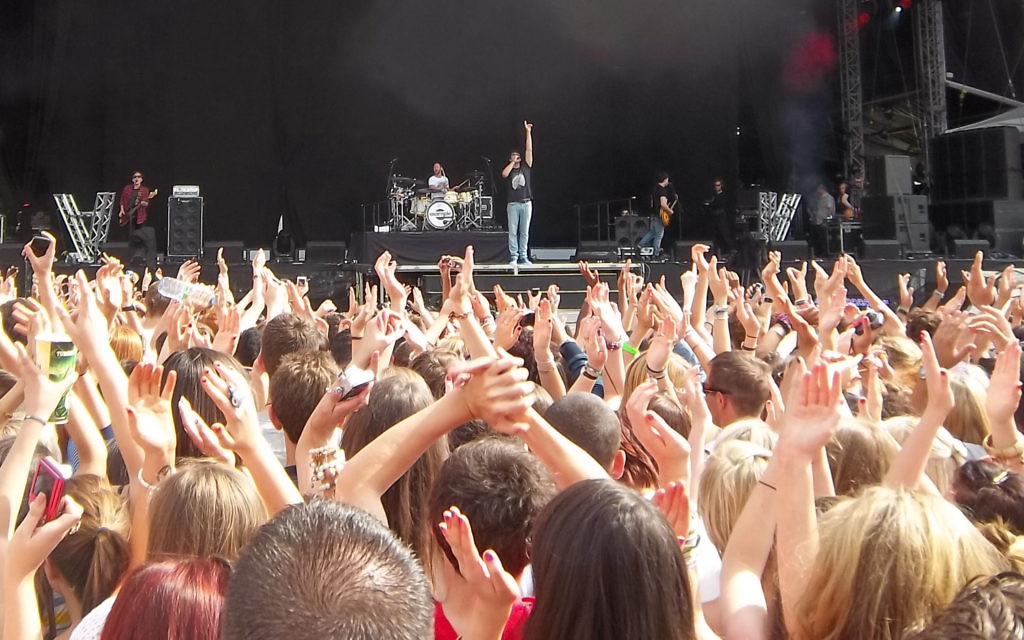 Festival season has begun and I’m glad that my festival days are behind me. Tents and I are done. I’m amazed that we even got started. It was a short-lived affair; I promised myself no more camping after one particularly miserable mudfest at Bestival, Rob Da Bank’s festival on the Isle of Wight. I spent much of that weekend cowering in my tent hiding from a seemingly never-ending thunderstorm. At least I hadn’t had to put the tent up myself.

Now it’s back to my original beloved mantra of “accommodation with a roof” whenever I go away. Hello nice warm bed, goodbye flimsy canvas. Hello lovely own bathroom, goodbye unfathomable queues for the grotty shared portaloos. If there’s a queue for the loo of your ensuite bathroom at 4am in the morning, something’s gone seriously wrong with your hotel security.

I still love live music. I just want to sit on a nice comfy chair whilst I’m listening to it, I want waiter service and I want a nice warm shower afterwards. One thing I just don’t buy though is the assertion that festivals aren’t for Jews. Loads of Jews love festivals. And this summer’s festival season proves it.

First up is Drake, the handsome Canadian rapper, whose mum is Jewish-Canadian while his dad is African-American-from-the-deep-South-ian. He had a bar mitzvah, which would have got him used to playing a crowd from an early age. Drake’s playing the Wireless Festival in Finsbury Park this weekend. Wireless is a day festival, so maybe Drake is taking a leaf out of my book and making sure he can get home to a nice dry roof afterwards.

Whether Drake will be reciting his bar mitzvah portion as part of his Wireless set remains to be seen, although he is playing on a Saturday so the addition of a haftorah in amidst the rapping could be a nice touch. Drake is appearing at the festival this year because he had to pull out last year due to illness. Oy. What could be more Jewish than succumbing to aches and pains? Drakey, here’s hoping for a healthier time this year.

Also appearing at Wireless will be Peter Rosenberg, who’s well-known in the States for being a hip-hop DJ. There’s a fine tradition of Jews in hip-hop, perhaps the finest being the Beastie Boys, who were known for a) being awesome and b) shouting a lot, both of which are Jewish traits, so the Beasties’ career choice makes perfect sense. Rosenberg will be hosting the main stage at Wireless and maybe he’s hoping that this appearance will make him more popular in the UK. My advice to Rosenberg would be to tell the crowd that he’s Jewish. That always goes down well!

Good luck to Drake and Rosenberg. Break a leg, boys. Wireless Festival takes place in Finsbury Park, which is near the homeland of Stamford Hill. Perhaps a friendly frummer can reach out and offer the boys a place at their table for Friday night dinner before the big gig.

Shlomo, the beatbox artist, isn’t averse to an outside party or two. He’s playing quite a few festivals throughout the summer including Lovebox, another day festival where you can mercifully escape to your bed afterwards. He’s also appearing at Shambala, a sleepover festival with tents where the hippy quotient is extremely high, and the Wilderness festival, which sounds hippyfied but it has the genuinely exciting promise of “eating experiences” and “gastronomy”. So after you’ve had a nice sit-down meal you can go and jiggle off the calories to our community’s leading beatboxer.

Turntable superstar DJ Yoda was named by Q Magazine as “one of the ten DJs to see before you die”. Well, we were at the same university (Warwick) at the same time (years ago) and I didn’t even manage to meet him then. You could get your chance this summer though as he’s all over the festival circuit.

As for me, I’ll be listening to the above artists on Spotify whilst lying on a nice beach somewhere. Get us an ice-cream, there’s a dear.