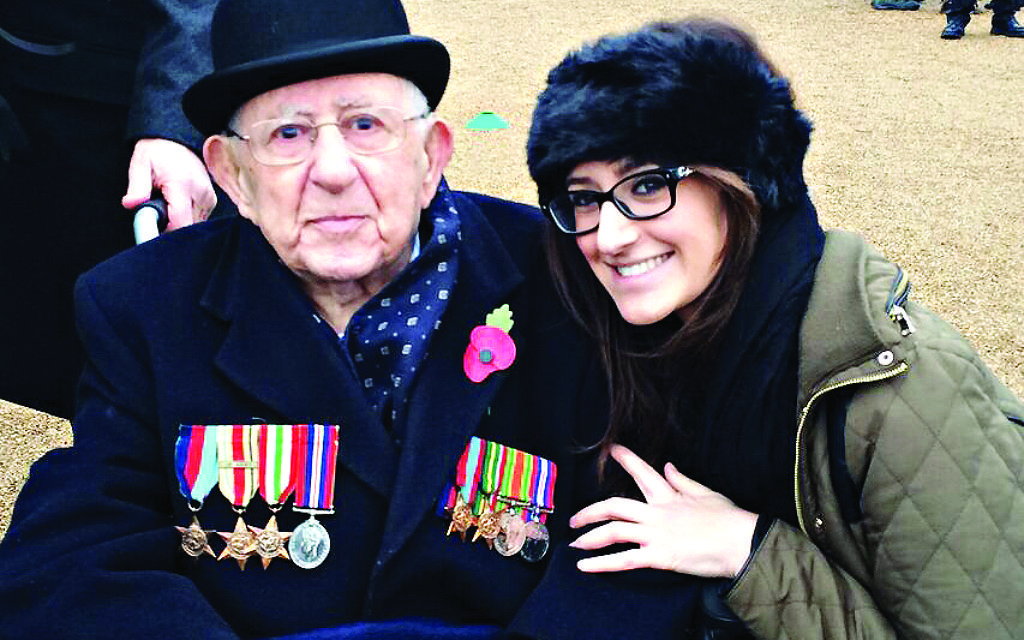 Helen Myer with her grandfather

Among the landmark anniversaries in military history marked in this year – VE Day, the Battle of Britain, the liberation of Bergen-Belsen and the Gallipoli campaign – one in particular weighs on my mind. VJ Day, celebrated in August, marked the moment of Japan’s surrender and the end of conflict. For my family it carried personal resonance too, marking 70 years since the day Allied planes flew over the infamous Japanese POW camps on the River Kwai – signalling to my grandfather, Captain David Arkush [pictured right with Helen], that his ordeal and that of thousands of others was at an end.

A 25-year-old dental surgeon when war broke out, my grandfather voluntarily signed up to join the Royal Army Dental Corps. He was not alone. Many Jewish doctors and dentists signed up alongside him, determined to defeat the Nazis.

In 1941, what he thought would be a quiet tropical posting in Singapore became something very different. Subsequent to Japan’s invasion he became one of 100,000 Allied troops imprisoned in one of the worst tragedies in British military history. In the midst of unimaginable cruelty and the deaths of tens of thousands due to executions, beatings, starvation and disease, my grandfather, the son of a chazan, duly became the spiritual guardian of the Jewish PoWs. He conducted Sabbath and festival services, a Pesach seder and oversaw Jewish burials for fellow PoWs. He remained focused on surviving and doing all he could under the circumstances to keep his Jewish comrades together and to keep morale high until the day of their liberation arrived.

Captain Arkush was the last surviving Dental Officer Far East PoW before he passed away, aged 100, in February this year. He left a void in all of our lives. Hundreds of people from far and wide sent notes of condolence and travelled to comfort us during the shiva. It was during this mournful week that the poignancy of his experiences hit home.

A unknown gentleman arrived, explaining that his brother, Private Israel ‘Bert’ Shapiro, was a 23-year-old signalman when he had been captured by the Japanese. Put to work building the notorious Burma Railway up the river from my grandfather’s camp, Private Shapiro succumbed to the lethal conditions and had been swiftly buried with a cross on his grave. Word reached my grandfather that a comrade thought to have been Jewish had died. He sent immediate instructions that the cross be replaced with a Star of David marker, which my grandfather made.

His orders were followed and years after the war’s end, unbeknown to us, Private Shapiro’s family traced my grandfather to thank him for what he had done and for the comfort it had given them in mourning their beloved son and brother, lost so very far from home.

As I listened intently to the conversation and watched this kind gentlemen discreetly wipe away tears, the anguish surrounding the interaction seemed almost too much to bear.

Now, 70 years after Private Shapiro’s family had been comforted by my grandfather’s actions, his family had come to comfort mine in our time of grief. My family and I always knew about my grandfather’s experiences, about his courageous acts in the camp and the protection he’d provided for his fellow PoWs. But what I’d never really absorbed was the agony experienced by families of those like Private Shapiro who did not come home.

Thousands of troops, including hundreds of Jews, perished in brutal places to uphold and preserve the precious values of freedom and inclusiveness that we hold so sacred today.

My grandfather was blessed to return home to be reunited with his family, marry and leave a legacy of children, grandchildren and great-grandchildren. But too many, including comrades he’d buried and years later whose graves he’d visited to say kaddish over, did not.

For my family, this Sunday’s annual AJEX parade – the first in which my grandfather is not with us – will be the hardest yet. My mum will march wearing his medals for the first time.

With every year that passes the number of Jewish veterans here to tell of their service and the sacrifice of their comrades becomes ever less. And the importance of attending and paying tribute as not just children, grandchildren and great grandchildren but as a community becomes greater still. Please join us on Sunday at the Cenotaph in Whitehall at 2:30pm.

By attending in our thousands to salute our veterans, we can ensure that the legacy of British Jewish service in Her Majesty’s Armed Forces – that of Private Israel Shapiro, Captain David Arkush and the thousands of others – a legacy of Jewish contribution, courage, survival and extraordinary spirit against adversity – is one we will not forget.