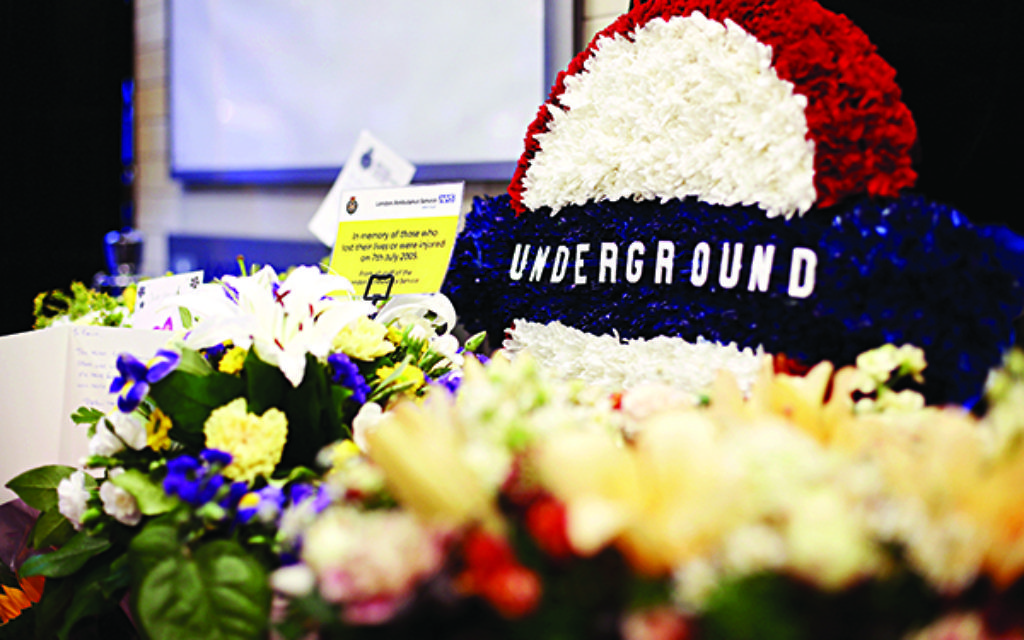 After living in Israel for 15 years, you build an instinct for how terrorists work. It wasn’t a sixth sense, or a feeling, or the benefit of seeing a little-known piece of information.

It was the successful London Olympic bid the day before. When there was progress, there was often a terrorist attack that followed.

That moment of joy for the nation’s capital convinced me that the following day would be a particularly vulnerable one for London. David cycled to work.

At the time, his commute took him to Tavistock Square. 7/7 was one of those days that pulled me in two directions. I counted my blessings that David was there helping survivors, and was not a victim himself.

I was devastated for those who had been injured or lost loved ones. This week, to mark the 10th anniversary of that awful morning, I took the short walk from Kings Cross station to Tavistock Square. I walked together with other faith leaders, holding a floral tribute that simply read “together”.

It was the most basic of messages, and a hugely important reminder. Ten years ago, on the day itself, Tony Blair gave a powerful address to the nation and the world. “When they try to divide our people… we will not be divided,” he said.

One of the former Labour Prime Minister’s talents was to reflect the mood of the nation at a given time. It was this sentiment of unity and stoicism that was felt throughout Britain. We were determined then, and so we should be now. I see the tenth anniversary of 7/7 as an opportunity to renew our vow, to restate our refusal to be divided. British Future, the think tank that arranged #walktogether, this week released some worrying statistics.

Fifty-four percent of Britons believe community relations have become worse since 7/7. With the murder of Lee Rigby in 2013, the recent shootings in Tunisia and the constant stream of news of the brutality of ISIS from the Middle East, it is no wonder there are tensions between our communities.

It’s no surprise that people worry, and suspect.

I believe the reality is not as bad as we sometimes feel.

When the Jewish community felt under siege last summer during the war in Israel and Gaza, social media played a big impact on our sense of safety. Events and actions that we don’t truly understand take place in our living rooms, on our iPads.

We feel a disproportionate surge in fear from distant or rare threats. We jump to suspecting anyone we feel may be linked to those who carried out the atrocity.

We were joined this week, at #walk together, by Gill Hicks, a survivor of the Piccadilly line bomb. Gill, who lost both legs in the explosion, could have decided to withdraw totally.

She could have resented anyone bearing any similarity to those who caused her such pain. But she didn’t.

In a time of difficulty, she leaned in. She went to the area where the 7/7 bombers grew up, and she has formed powerful relationships there.

Her mission is one of peace. Our walk together as faith leaders was not just a demonstration of unity. It was about showing off the kind of Britain we want to see – one where people don’t apologise for their differences, but where we recognise those differences, and move forward together regardless. So what should be our response to this anniversary? Be proactive.

Renew your vow of unity by talking to that neighbour you only nod to in the mornings. You’ll find they’re a human being too, with hopes and fears you can relate to.

You don’t have to like them. We don’t all have to be best friends. We just need to wash away the otherness that has muddied our understanding of some parts of our society.

It’s not about liking, rather about humanising. Gill took this approach to its shining extreme. She chose to embrace life in response to her trauma, describing herself as “a very blessed person”.

This week, standing in a sun-soaked square in central London, opposite the building my husband used to commute to, I could not help but feel the same.