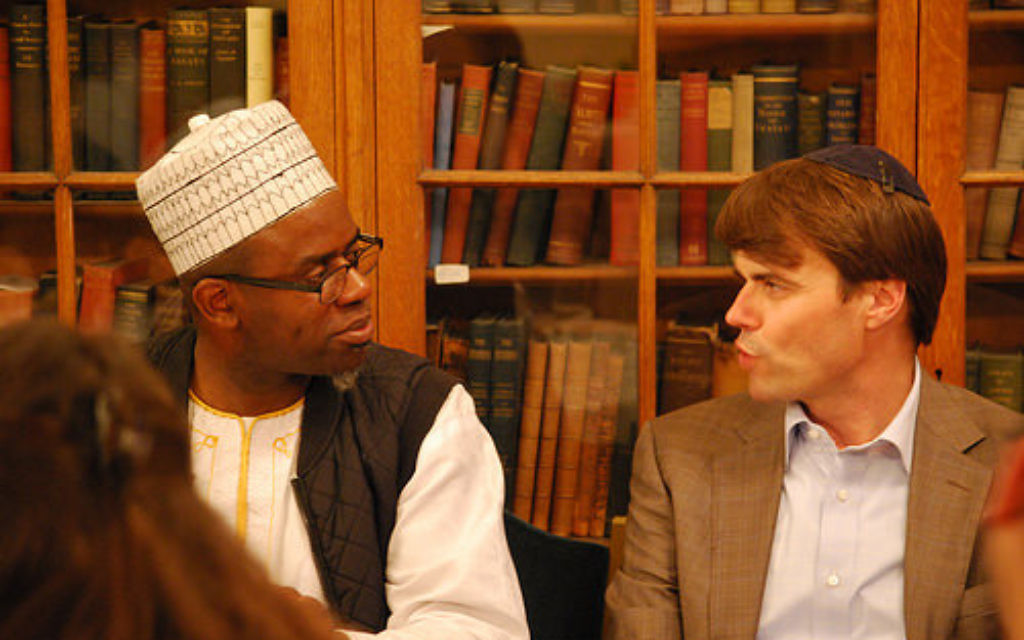 A Jewish and Muslim man at an interfaith event in London to celebrate Ramadan in 2015. (Photo credit: Near Neighbours )

I am one of the people who, just over ten years ago, helped to set up the Muslim Jewish Forum of Greater Manchester.

For me, supporting its formation was a no-brainer. I have always been interested in other religions, and still remember the insights into Judaism I gained from reading “This is my God” by Herman Wouk over 40 years ago while at university.

More practically, there are many issues such as circumcision and religious slaughter where Jews and Muslims face common pressures in a society which understands religion less and less.

We can be far more effective combatting such pressures if we collaborate, instead of Muslims and Jews campaigning independently.

All of the organisers wanted a body that would be more or less evenly balanced between Muslims and Jews, and our constitution reflects that. However I had a secret fear that once we started recruiting members, the Jewish members might be swamped by the Muslim members.

However once we got going, my secret fear proved groundless. Instead, we found ready take-up amongst Greater Manchester Jews, but relatively few Muslims joining.

Accordingly in the early years our events generally had far more Jewish participants than Muslim participants. While this surprised me given the numbers, once I thought about it I realised there were several factors contributing to the disproportional participation.

Secondly, while we never turn away young people, our activities have more appeal to middle-aged and older people than they do to teenagers. The age profile of British Jews is very different from that of British Muslims who are on average much younger.

And lastly, British Jews have been here much longer than British Muslims. The largest wave of Jewish immigration took place from around 1880 to 1920 driven by Russian and other Eastern European pogroms.

Conversely large scale Muslim immigration only began around 1960 although my father came for the first time in 1931, and I was a relative pioneer in 1952, aged 1 ¾!

In my view being part of a longer-settled community makes you more confident about engaging in dialogue with “the other.”

In my view, these are the key roots of the disproportionality in participation.

I do not believe that religious views about not mixing with other communities are a significant factor in the disproportionality.

However I have no data on the relative frequency of such beliefs, and my personal impression is that they are not found to any greater extent in one religious group than in the other.

With the perspective of a decade, what is gratifying is how things have changed over the last 10 years. We now find roughly equal numbers of Muslims and Jews attending our events.

Writing this has helped me to focus on how things will change.

The average education level of British Muslims will have risen over the last 10 years, as people at university when we started are now entering their 30’s, while some of the older generation will have died. British Muslims have been here for 10 more years, which is significant if you start counting from 1960. There are far more Muslim councillors in the boroughs of Greater Manchester now than there were 10 years ago.

This greater confidence in being settled here in Britain must be contributing to the participation rate.

Looking forward, I expect these trends to continue.

Mohammed Amin is Co-Chair of the Muslim Jewish Forum of Greater Manchester, www.muslimjewish.org.uk He is writing in a personal capacity.