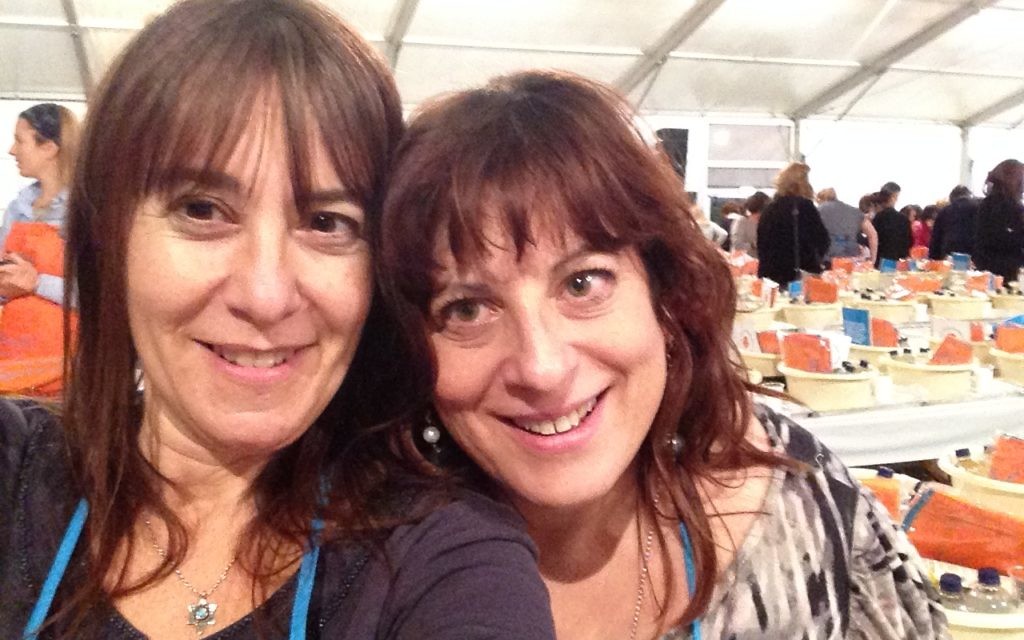 Angie at the Challah bake with her friend Linda

It was at a tricky time. Problematic. I mean, who runs a Jewish do from 7-9pm and doesn’t supply food? But this was a bit different, I guess. A challah making session for 5000 people.

I suggested it to my friend and colleague Linda: “Yeah, it sounds okay, but when are we going to eat?” “We’ll think of something, “ I replied, “I’ll order the tickets.” We thought of something – home made sandwiches in Starbucks in Brent Cross before the gig. (It was one of those months where the Friday we get paid was right at the end.) She got herself a drink and I found the table behind the counter where the staff couldn’t see us. We munched on our contraband and laughed at the woman at the table next to us who was fast asleep.

Then we got nervous that her head might actually fall off as it kept tilting so far back. Sandwiches scoffed, we left Kip Van Winkle in search of the toilets for an ‘investment wee’ before finding the marquee where the event was to taking place.

The police, a security company and the CST were out in full force protecting the yentas of North West London. I spotted my husband wearing a ‘high-vis’ vest and one of those ear piece things that choreographers have and got a quick kiss as he ushered me & Linda along. (At this point I should add that he is actually a member of CST and was out on a job).

There were massive queues to get into the marquee and we were told that there were plenty of places in the women only section. Not our thing, but never mind. We found 2 spaces in the middle of a row and nobody came to stand near us, Funny that. It was noisy and chaotic – but in a nice way. There were massive screens with video clips of lots of different people singing “Ay, ay, ay, Shab-bat U-Kay”.

Eventually participants had no option but to take their places at workstations next to us and the organisers tried to get the show on the road. In front of us was a bowl containing all the ingredients to make two gesunde challot plus other Shabbat UK paraphernalia including a natty apron. The £10 ticket was becoming quite a ‘metziah’. Unfortunately the same could not be said of the raffle prizes. The third prize was an hour’s learning with The Chief Rabbi. Nice bloke and all that, but most women would probably prefer the fifth prize of a £500 jewellery voucher.

The breadmaking commenced and so did the brachot. I put in my ingredients too soon and premature activation ensued. I kneaded like a good ‘un, but my real problems were with the plaiting. I have never mastered that sort of thing – when my husband used to go to work early, my daughter would have to do her own hair for nursery.

More brachot, then all manner of breaking bits off for burning and tzedaka. We escaped with our bread before the crowds and Linda found a supermarket trolley to transport them to the car as they were a tad heavy. My husband arrived home an hour later than me. “Was there some aggro?” I asked worriedly. “Only from the Jewish women” he replied. He and my son were non-committal when they saw my efforts, but a bit of egg on top and half an hour in the oven and they vaguely resembled something we eat on Friday night. But the taste …. challahtastic.