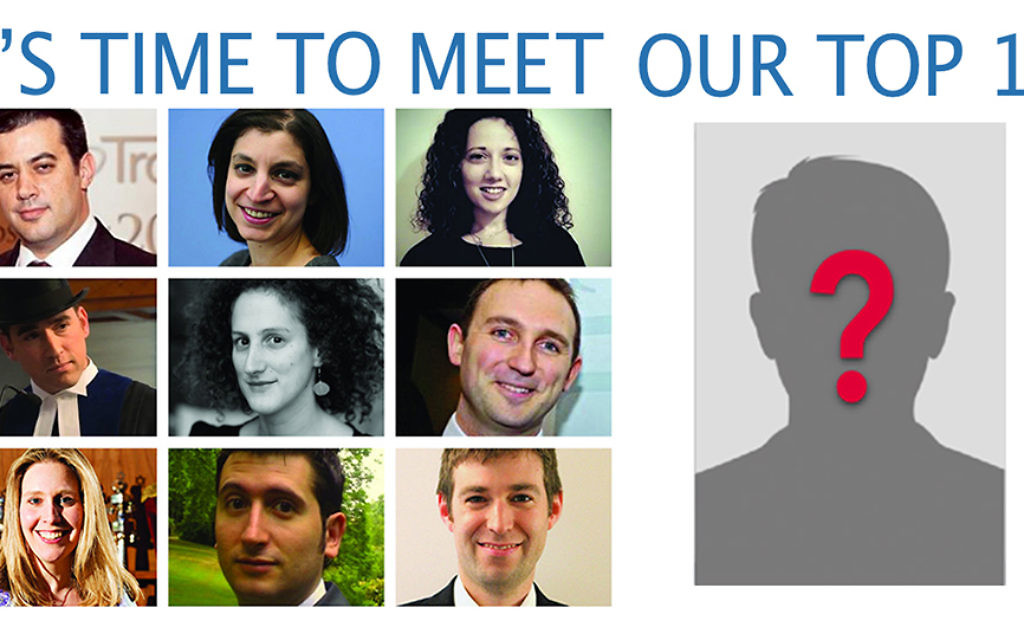 While Forty Under 40 is neither a rigorous poll of electors or a vote by thousands – or even hundreds – it is the view of an expert jury based on more than 250 nominations. It gives a snapshot of the strength in depth of the next generation of leadership in British Jewry.

Our jury was carefully assembled so it had a wide and varied experience of all parts of the community in an attempt to have in depth knowledge of all those nominated and their activities.

The list is based on a voting system where each judge chose their top 40. We then merged individual lists based on the average ranking, also adding weighting to take account of how many judges voted for each person on the list.

We did not go looking for gender balance, but did look at the final list and, while there are more steps to ensure that more women will be at the top tables of the Jewish community of the future, things are going in the right direction.

With five of the top 10 women, including the number one, and 15 of the top 40, and 12 of the 20 to watch, we are getting closer than most trustee boards of current communal organisations.

Equally, we did not look for token LGBT names or activists. They are increasingly a proud and more visible part of our community. This is reflected both on the 40 and 25 lists. Of those on our lists, many have been involved in the community for a long time.

Looking at the rest of the names, so many have been involved since they were teenagers.

The sublists [CLICK HERE] show the variety of roles played by those in our top 40.

They are politicians, community warriors, transformers, media and culture figures, communal rabbis, educators and many more. In every area, there are many other names. The panel was spoilt for choice. Our community has so many options for leadership development and it is not just teenagers who can access them. So even if one missed out on youth movement or never beame involved with a Jewish society on campus, there are so many ways to step up and become involved in UK Jewry, from volunteering opportunities to more formal leadership programmes, such as Adam Science and, now, Gamechangers.

Maybe the easiest way in to activity is through programmes such as Limmud and the educational initiatives. However, if social action or politics is more your thing, then there are campaigns and activities from the conventional to innovative to alternative. With rolemodels such as those mentioned in our top 40, and so many others knocking on the door, the future is bright. As can be seen from the sub-lists, there are many types of people on the list from many different areas of the community. There is one name missing from our top 10.

At our meetings he withdrew his name from consideration.

Justin Cohen, news editor of the Jewish News, got many nominations and had wide support among the panel. He would have deserved his place for his creative contributions to Jewish community.

I want to thank my fellow judges for all their work, the JLC for its sponsorship and Jewish News for running these lists. I also want to recognise Gabriel Pogrund for his biography writing both on the Forty Under 40 and Twenty-Five Under 25.

He is a young student journalist who has been editor of The Tab, London. He is one of a great group of Jewish student journalists, which is yet another group to watch out for, if you’re wondering who will be a future Jonathan Freedland or Melanie Phillips.

When I took this on I thought it would be fun. I did not realise how much work it would be to ensure it was fair and accurate.

We tried to achieve that at all times. If you feel we missed someone out, got them in the wrong place, not got their biography quite right, I can assure you it was not for lack of effort.