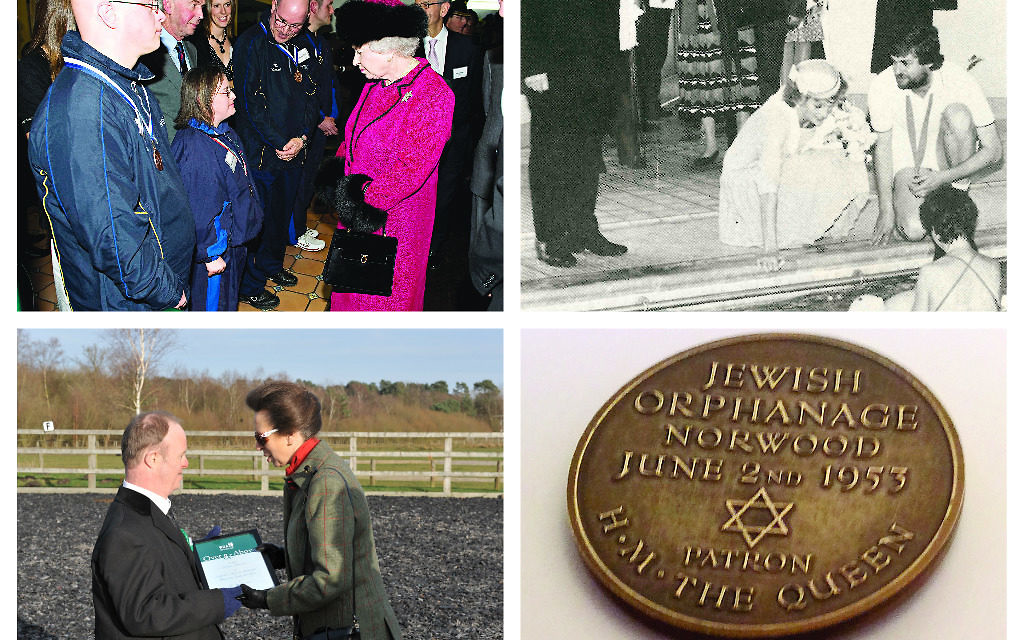 Within 20 years of the Goldsmid brothers establishing Norwood’s earliest incarnation, The Jews’ Hospital, it had attracted the attention of the Royal Family. In May 1815, Queen Victoria’s uncle, the Duke of Sussex, became the first Royal to be patron of a Jewish charity, highlighting its ‘beneficial effects’ to the community and ‘gratifying administration’.

Two hundred years on, Norwood, the largest Jewish children, family and learning disability charity in the UK, has had a continuous line of Royal association and is currently the only Jewish charity to have Her Majesty The Queen as patron.

A teenage Juliette Weisz safe at the Norwood Orphanage after escaping from war-torn Hungary;

When 13-year-old Norwood girl Juliette Weisz* and her classmates were called out of lessons for a special announcement from the headteacher on 6 February 1952, she thought it could only mean one thing – war.

It was the height of the cold war and Juliette, a Hungarian Jew, who had been living at Norwood for a year, assumed nothing else could be serious enough to interrupt lessons and depart from the normal school routines.

However, it was not war. It was the shocking and tragic announcement that King George VI had died. The outpouring of grief and mourning from her fellow classmates, friends at Norwood and the nation as a whole was alien to the Hungarian teenager.

At the orphanage, they were mourning the loss of more than their monarch; King George VI had been the patron of Norwood, having taken up the mantle from his brother and his father and grandfather before that.

“I couldn’t feel it myself but I understood the reverence my fellow Norwood scholars felt for their Royal Family and their patron, who embodied everything British: the culture, the history and the traditions of which they were so proud and which had nearly been destroyed. I knew I would probably never feel what they felt but I understood it, with a secret envy,” says Juliette.

Juliette Weisz with her husband

When Juliette’s parents were deported from their home in France during the war, Juliette’s aunt had taken her toddler niece back to Hungary where her mother’s family lived. The safe haven didn’t last long and, in March 1944, German troops marched in. Juliette was hidden in the country with the help of their maid, but her grandparents, uncles, aunts and many of her cousins were murdered.

Juliette was reunited with her mother after the war but was unable to find her father. Orphanage life began after that – with her mother looking for a new start in England. Her mother went into service and Juliette arrived at Norwood.

Juliette’s next insight into how the British adored their monarch came when she was chosen by her classmates to watch the coronation procession of Her Majesty Queen Elizabeth II.

“At Norwood, everyone was caught up in the great excitement of the pageant about to be played out,” Juliette recalls.

“Mr Conway (the headmaster) was figuring out how to rig up the two available television sets so everyone would be able to witness this historical event. On the day of the coronation, I got up at four o’clock in the morning so that we could get to the Embankment in plenty of time. When I got back to Norwood later that day, I had missed the televised ceremony at Westminster Abbey but I had seen, in the flesh, a real British coronation procession.

“I got back to Norwood in time for the special Coronation Day tea in the dining hall. That was a lot of fun, with everyone putting on airs and graces and pretending we were at Buckingham Palace.” At Norwood, the charity’s Royal association was always felt. Back in 1815, when Norwood was honoured with its first Royal patron – Prince Augustus Frederick, Duke of Sussex – the charity received regular visits from him.

This continued after the Duke’s death when his brother Prince Adolphus, Duke of Cambridge, took over.

Within the orphanage, a white alabaster bust of Queen Victoria gazed regally down at the boys and girls when they were in the dining hall – a constant reminder of the royal association.

As Juliette describes, former Norwood children, from the days when it was an orphanage, recall Royal celebrations and occasions which were always marked with special activities and often commemorative gifts. A souvenir medallion was created for both King George VI’s and Queen Elizabeth II’s coronations. Since the last coronation, Norwood has received several royal visits – two from Her Majesty The Queen and from the Princess Royal, as well as the late Princess of Wales, Princess Alexandra and Sarah, Duchess of York. The Queen’s first Norwood visit in 1985 was to a reception at London’s Guildhall to mark the 190th anniversary of the charity. Former chief executive of Norwood Norma Brier recalls Her Majesty’s interest in hearing about her ancestors’ involvement with the organisation.

“She had a long talk with Judge Israel Finestein, Norwood’s president at the time, about all the different members of the Royal Family who had been patrons before her,” says Norma. “She was also very interested in hearing about everything Norwood did, asking all about the roles of everyone involved.”

The Queen’s second visit was to the charity’s Ravenswood facility in 2008 to meet staff, the people Norwood supports and to open the Pamela Barnett Centre, now home to 16 adults with profound and multiple learning disabilities.

Norma recalls how special the visit was to staff and residents: “Having the Queen as patron always made everyone feel a bit more special. So when she visited, it was a huge occasion and celebration for everyone there. We tried to make sure as many people met her as possible.”

Sue Ravey, manager of one of the homes, was one of those people. “I remember when the Queen arrived there was bunting and a sea of people lined up, waving flags, outside,” she says. “It was a big day, but it also felt like a really relaxed visit

“There was a line-up in the café and she said something to everyone, but for me the most memorable part was watching the Queen when some children from Norwood’s recreational and short breaks services performed songs for her. She stood tapping her foot and you could see from her body language how engaged she was. It was wonderful to see how much this made an impression on her.”

The late Princess of Wales visiting Ravenswood in 1985

The late Princess of Wales visited Ravenswood in 1985. Arriving by helicopter, Her Royal Highness toured the facility and opened the rose garden there, signing a book recording the planting of the garden’s first rose in honour of the birth of Prince Harry.

“This was an incredibly exciting day,” says Norma. “We were so impressed with Princess Diana’s love of the residents, with her immediate understanding of their problems and her willingness to stay longer than her allotted time with some of the children.”

Ravenswood’s then honorary Chaplain Rev Reuben Turner had the pleasure of watching his daughter Sarah, a resident, present the Princess of Wales with a sculptured rose as a memento of the visit.

“My daughter Sarah was very excited to be presenting the Princess with the gift. She curtseyed and they exchanged a few words. Sarah was very taken with her and they seemed to get on very well together. For me, it was a very emotional and proud moment – one which I’ll never forget.”

The day after the visit, Ravenswood received a letter from Buckingham Palace to say how touched Her Royal Highness had been by the wonderful atmosphere created by the work and love of the highly dedicated staff.

The Princess Royal also visited the Ravenswood facility twice – in 1973, when she opened the main building at Ravenswood, and in February 2011, when Her Royal Highness toured Ravenswood’s state-of-the-art equestrian facilities and watched and presented prizes at an equestrian event.

Her Royal Highness was especially interested in the therapeutic value of riding and working with the horses, which tied in with her work as president of Riding for the Disabled Association (RDA).

One of the residents the Princess Royal met on this later visit was Michael Banbury, whom she presented with an RDA ‘Over and Above’ award for his commitment to the stables. Michael has been involved for more than 20 years, taking gold and silver at the 1998 Special Olympics.

“She gave me a certificate and asked me about my riding,” he says Michael. “I was nervous to meet her, but also very excited. I had been really looking forward to it and we all felt really honoured that Princess Anne was coming.”

Michael presented the Princess Royal with a collage of a horse, made by the Ravenswood art class. “She was thrilled to bits with it,” he said afterwards. “I expect she’ll hang it in her house, but I hope she shows it to the Queen.”

Princess Alexandra visited Ravenswood in 1997, opening five homes for adults with learning disabilities. Her Royal Highness took a particular interest in the layout of the homes, discussing Feng Shui and the impact it had on people’s well-being.

In 2010, the Duchess of York visited Norwood’s Kennedy Leigh Family Centre in Hendon and spoke at the annual dinner the same year. She said: “Being at Norwood filled my heart and restored my faith in human nature.”

“Having Her Majesty The Queen as our patron has always been experienced as a huge honour within Norwood and a benchmark of the positive benefits we bring to the community we support. It is thanks to the dedication of our staff and volunteers that we are able to provide these high-quality services to the thousands of children, young people and adults.”

* Juliette Weisz was born Evelyne Juliette Weisz but was called by her middle name Juliette once she got to England and Norwood. After she married and moved to the United States, she reverted to using her first name and married surname, Evi Blaikie.