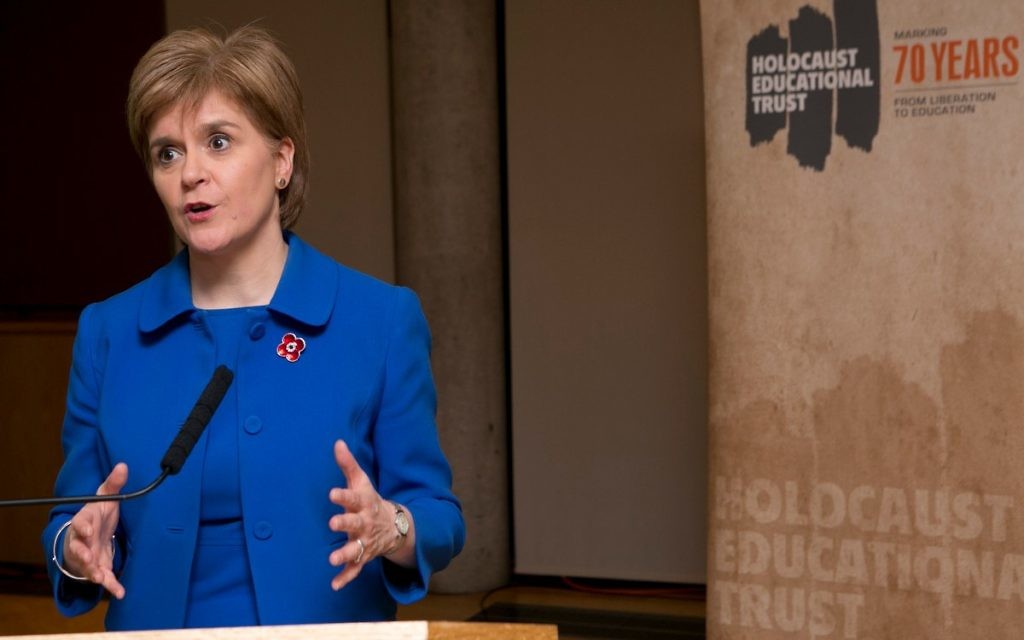 Scotland’s First Minister praised the impact of the Holocaust Educational Trust as “spurring us on to create a better future.”

Speaking at a reception at the Scottish Parliament last night, Nicola Sturgeon joined regional H.E.T. Ambassadors, MSPs, students and teachers, to pay tribute to the organisation’s work in educating about the Shoah.

She praised the organisation’s ‘Lessons from Auschwitz’ project, which offers students the chance to visit Auschwitz-Birkenau during a four-part educational course.

Sturgeon commended the organisation, for “working to ensure that nothing like the Holocaust ever happens again, is to ensure that it is never forgotten.”

[H.E.T] has made the act of remembrance its mission and it should be commended for that ..We must continue to make it clear that anti-Semitism, racism, or discrimination of any other kind is unacceptable.

The work of the H.E.T, by making people reflect on the horrors of the past, plays an important part in spurring us on to create a better future.”

Karen Pollock MBE, Chief Executive of the Holocaust Educational Trust thanked the Scottish Government for funding the funding the Lessons from Auschwitz project, which has so far been able to take over 3,000 students and teachers from all over Scotland to visit the former Nazi concentration and death camp Auschwitz-Birkenau.

“We now have thousands of Scottish Ambassadors committed to educating others about the horrors that took place during one of the darkest periods of our history.

This year marked the 70th anniversary of the liberation of the concentration and death camps and, as fewer and fewer Holocaust survivors are able to share their story, the dedication of these Ambassadors to ensuring their stories are not forgotten is more important than ever.”

Following the event, today in parliament during Scottish questions, two MPs spoke about the issue of anti-Semitism in Scotland during questions to the Scottish Secretary.

The secretary, David Mundell said: “Recorded incidents of anti-Semitism in Scotland are thankfully low.. Tackling anti-Semitism goes right to the heart of what we stand for as a country. Whatever our politics and whatever our faith, we must look to defeat it.”

Member of the All-Party Parliamentary Group Agaisnt Anti-Semitism, John Mann MP asked whether the secretary would “talk with the Scottish Government, about how the system of state funded security in Jewish schools in England could be emulated in Glasgow.”

The minister said he would be “happy to do so” adding, “all MPs from Scotland are united in our view that we cannot tolerate anti-Semitism.”