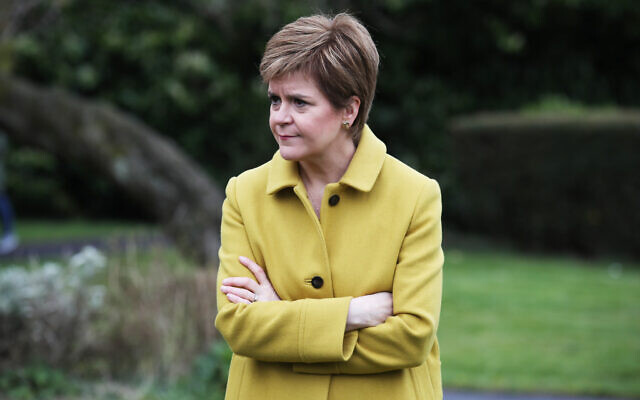 Nicola Sturgeon has been criticised for welcoming ministers into her government who have never supported the internationally recognised IHRA definition on antisemitism.

Ex-Scottish Conservative leader Jackson Carlaw said it was an “utter disgrace” Greens co-leaders Patrick Harvie and Lorna Slater had been appointed as ministers after a co-operation pact was agreed with the SNP.

He cited a motion passed by Scotland’s Greens in 2015 that condemned “Israel’s claim to be the Jewish State” and labelled Zionism as “based on Jewish supremacy in Palestine”.

Members also called for Hamas to be removed from a list of terrorist organisations.

Joe Glasman, of​ the Campaign Against Antisemitism, called on First Minister Sturgeon to “urgently clarify” the Scottish Government’s policy.

The Scottish government adopted the IHRA definition of antisemitism in full in 2018.

But Glasman said: “If she fails to control the extremist elements of her new governing partner, she’ll be to blame for elevating those views into the national conversation. Amid campaigns for Hamas to be proscribed in full by the UK Government, a party whose policy is the opposite sits in the Scottish Government.”

Jackson Carlaw, the MSP for Eastwood said the Greens “have backed positions that appear to be contrary to the IHRA definition.

“Nicola Sturgeon has to distance her Government from this shameful stance.

“This kind of outrageous rhetoric from the Greens has no place in 21st Century Scotland. It doesn’t belong anywhere near the Scottish Government and should be stamped out.

“Scotland’s Jewish community needs to hear an unequivocal condemnation of the Greens’ position and assurances that the Government does not support these extreme views.”

Sturgeon was criticised over a tweet earlier this year in which she appeared to take a one-standed stance over the lastest conflict with Israel and the Palestinians.

But she met with Scottish Jewish communal leaders last month to reassure them she was balenced in her approach to the Middle East.

She also accepted there was a need to be sensitive to the concerns of the Scottish community over instances of antisemitism.

A spokesman for the Scottish Greens said: “The Scottish Green Party abhors antisemitism. There is absolutely no place for any anti-Jewish prejudice in society. Green politics is rooted in environmentalism, peace, social justice and democracy.

“Our party’s position on international affairs, including Palestine and Israel, is guided by these pillars. We will continue to raise our voice in support of a human rights based outcome that allows everyone in the region to live in peace, free from oppression or occupation.”