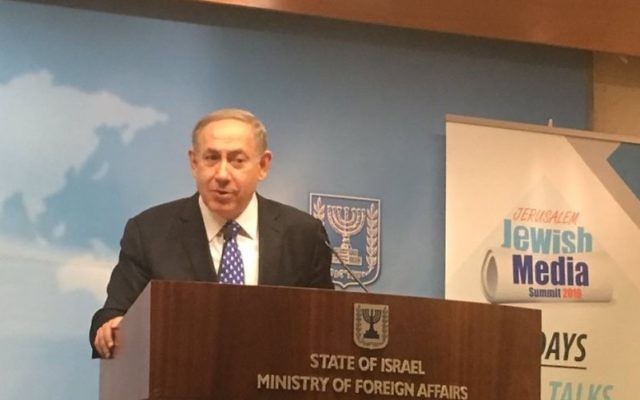 Benjamin Netanyahu has denounced the campaign in the UK for an apology for the Balfour Declaration – suggesting it was driven not by territorial dispute but by the very existence of the Jewish state.

The Israeli prime minister’s comments to the Jewish News came as Anglo-Jewry gears up to mark the centenary of Britain’s historic pledge and just weeks after the House of Lords launch of a campaign to push for an apology for the 1917 declaration – which he dismissed as “amazing”.

Addressing the second Jewish Media Summit in Jerusalem, he said: “The Balfour declaration recognised this land as the home of the Jewish people which obviously had consequences later down the line.

“But if the Palestinians are challenging 100 years later even the idea that the Jewish people have a home here you know they’re not really gung-ho on a state – a nation state for the Jewish people. It’s very revealing about the true source of this ensuring conflict.

In answer to my question, @netanyahu denounces campaign for UK apology over Balfour Declaration as 'amazing' #JMS2016 pic.twitter.com/0fTZwqmoLw

Although the premier didn’t say what he will do for the centenary, Mark Regev, Israel’s ambassador to the UK and the PM’s former spokesman, has previously spoken of bilateral plans to mark the occasion. A programme of events is also being finalised by the Balfour 100 Committee, comprising dozens of Jewish community and Israel organisations.

Netanyahu also used the summit to rubbish claims that Israel is facing increasing international isolation – insisting the opposite is the case.

With a diary comprising 250 meetings with presidents, prime ministers and foreign ministers this year, he said: “The great powers of Asia, Africa and Latin America, they’re all coming to Israel. It’s happening at an unbelievable pace. I wish we had a little isolation because I could use the time.”

He said warmer relations were being driven by cooperation on tackling terrorism, Israel’s technological prowess and the Israeli-Palestinian conflict – claiming he encourages visiting leaders to host direct talks without preconditions.

“Israel has all of a sudden become a cyber security and digital health power. We have a car industry all of a sudden. All of these countries understand that not only to protect themselves against terrorism but to seize the future – everything is becoming technologies – and Israel is a global force in technology.” He predicted that “it’s only a matter of time before this bilateral change is going to be reflected in the way countries vote in the UN”.