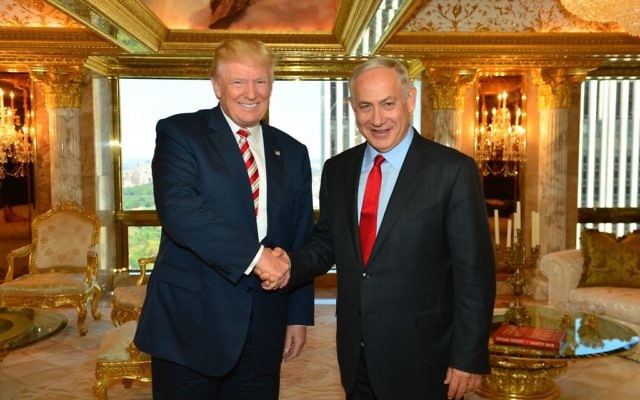 ”Our relationship with the only democracy in the Middle East is crucial to the security of both our nations,” Spicer said.

Netanyahu confirmed and welcomed the invitation.

“I deeply appreciate President Trump’s kind invitation to come to Washington and the warm words about Israel,” he said in a statement. “I look forward to discussing with him the areas of cooperation between us that are so vital to the security and well-being of our two countries.”

Trump and Netanyahu are expected to discuss a range of issues where Israel and the Obama administration had strong disagreement, including the Iran nuclear deal, settlements policy and moving the U.S. Embassy to Jerusalem.

This weekend, Trump suggested he was less enthusiastic about moving the embassy than he was during the campaign, when he pledged to do so, or even in the days leading up to his 20 January 20 inauguration, when he repeated the pledge.

“I’m looking at it, we’re studying it, as you know we’ve discussed this before,” Trump told the Christian Broadcasting Network in an interview broadcast Saturday. “We’re studying it very long and hard. You know it’s a very big decision because every president for the last number of presidents, large number, they’ve come in and they were going to do it and then all of a sudden they decide they don’t want to get involved.”

Trump and his spokesman have said since the inauguration that they are at the early stages of deciding on when to move, but Trump’s CBN interview was the clearest sign yet he is reconsidering the idea.

“I’ve always liked the concept of doing it, I’ll tell you that. I’ll have a decision in the not-too-distant future,” Trump said. “There’s certainly a chance of it, absolutely, but we’re doing very detailed studies on that and we’ll come out very soon.”

Vice President Mike Pence, meeting with Jordan’s King Abdullah in Washington, discussed the embassy issue and told the king that discussion was still in its “early stages,” Spicer said at the news briefing.

Trump’s nominated ambassador to Israel, David Friedman, one of Trump’s longtime lawyers, has said he would prefer working from Jerusalem.

Congress recognised Jerusalem as Israel’s capital in 1995, but presidents have since then exercised a waiver should the move pose a risk to national security.

Netanyahu wants to reverse the sanctions relief for nuclear rollback deal reached last year between Iran and six major powers. Trump has said it is a bad agreement but has not indicated he will pull out of it.

Last week, Netanyahu announced major building launches in the settlements and in eastern Jerusalem, shortly after the Obama administration in its final month allowed through a U.N. Security Council resolution condemning settlements.