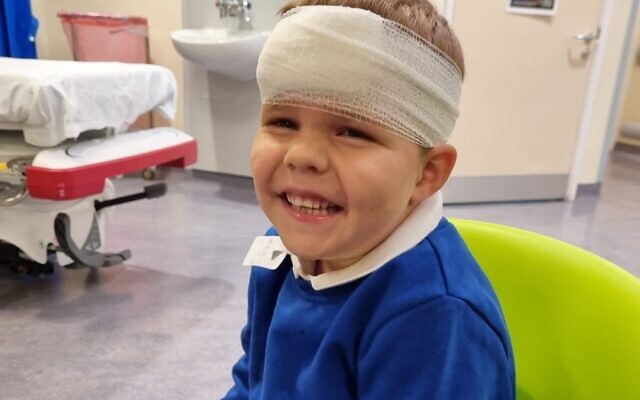 A relieved mother has praised four Yavneh students who came to the aid of her three-year-old boy after he crashed his bike.

In a Facebook group called What’s Coming To The Wood, Bourke posted a picture of a smiling Harry with a bandage around his head and  wrote that the teenagers had “really restored my faith in humanity”.

She said Harry “couldn’t stop on his balance bike and went right into a brick wall and unfortunately severely injured his head”.

She added: “I was on my own and had to try and stop the bleeding. If they weren’t there to help by calling 999 and helping me a lot with my son I don’t know how I would have coped.”

Her post received more than 1,300 ‘likes’ and 150 comments, before Bourke was put in touch with the parents of the students.

Speaking to Jewish News, Bourke said she had now been “lucky enough to get in touch with the parents of these four boys to thank them all personally”.

She added: “They are an absolute credit to their parents. If it wasn’t for these four boys I wouldn’t have managed to get my son the help he needed as fast as he did. They went above and beyond to get medical help from their local college and called 999 on my behalf while I was trying to stop the bleeding.

“My son had to have surgery the next morning but is finally on the mend. It’s a moment I will never forget.”

The boys, Ben Mallett, Oli Bloom, Benjamin Hirschfield and Daniel Schechter, were also praised by Yavneh headteacher Spencer Lewis, who said: “We are  extremely proud of what the students did in coming to the aid of a young child and his mother and I have already publicly congratulated them and written to their parents.

“Their actions are an embodiment of our school moto of olam chesed yiibaneh – a world built on kindness’, which sits at the centre of everything we believe.”