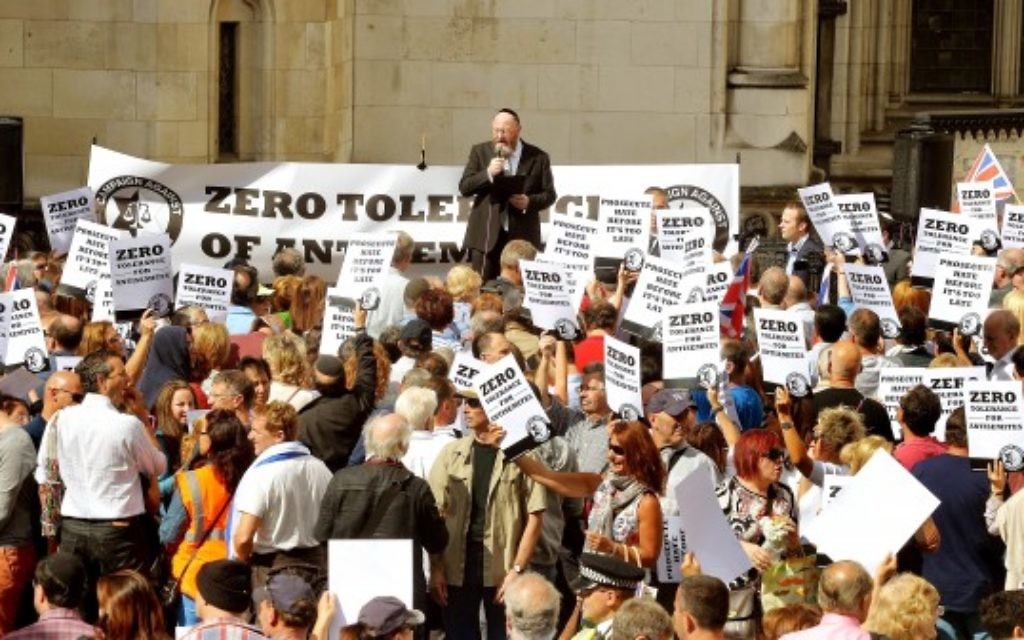 More than 4,500 attended a rally in central London, in response to the rise in attacks on the Jewish community in the UK.

More than 4,500 attended a rally in central London, in response to the rise in attacks on the Jewish community in the UK.

The Government should commit funds for security at British synagogues as part of a new “plan of action” to tackle hate against the Jewish community, according to a cross-party group of MPs, writes Justin Cohen.

Nearly five years after the coalition announced funding for security guards at state schools and amid the ever-present terror risk to the community, the All-Party Parliamentary Inquiry into Antisemitism called for “a Governmental fund to be established to cover both capital and revenue costs for the security of synagogues”.

A national review of interfaith work and a call to examine the possibility of prevention orders to remove persistent online abusers from social media were among more than 30 recommendations for politicians, police and the Crown Prosecution Service contained in the 112-page report, described by David Cameron as “hugely important”.

John Mann MP, chair of the All-Party Parliamentary Group Against Antisemitism, said: “It is the responsibility of parliamentarians to take the lead in this fight. Whoever is in power, and all the party leaders are welcoming this report, can be on notice that we expect it to be the basis of their work programme on tackling anti-Semitism and the new government will be held to account on its delivery.”

The inquiry was launched by Mann following a summer in which the Middle East conflict spilled onto the streets of Britain – with July and August seeing the highest and third highest number of anti-Semitic incidents since records began three decades ago. Comments or threats on social media made up a fifth of the total of 1,168 attacks on people or property or abusive behaviour recorded by the CST in 2014. ‘Nazi’ and ‘Holocaust’ were among the top 35 words used online in relation to Jews over the summer.

The 12-strong group of MPs and peers call on the CPS to examine the possibility of using prevention orders – “internet asbos” – to take those convicted of anti- Semitic abuse on Facebook or Twitter offline as part of sentencing. “If it can be proven in a detailed way that someone has made a considered and determined view to exploit various online networks to harm and perpetrate hate crimes against others then the accepted principles, rules and restrictions that are relevant to sex offences must surely apply,” the report says.

Richard Matthews QC and barrister Jonas Milner, in a separate report for the inquiry, conclude that existing laws “are both suitable and satisfactory” in the face of rising online anti-Semitism, but suggest new guidance could be developed by the CPS to cover religious hate on social media.

New guidance on “when and in what circumstances” tactics by anti-Israel protestors could be considered criminal should also be considered, they said.

In addition to physical security measures, Mann says the summer had revealed an urgent need to address “our public debate”. Writing for Jewish News, he said: “Too often, leading figures in public life employed language that knowingly or not, featured anti-Semitic tropes. The trivialisation and relativisation of the Holocaust, accusations of dual loyalty and malign influence and the categorisation of Jews as good or bad must be stopped. We argue that a more sophisticated understanding of anti-Semitism is needed and better defined boundaries of discourse. We need to ensure that going forwards, ignorance is no excuse.”

He goes on to say that words can also be a “force for good” – with the importance of interfaith dialogue central to the report. Acknowledging the strains on relations between the Jewish and Muslim communities at times of conflict thousands of miles away, the report urges that the UK Government and devolved administration carry out a “national review” of interfaith work, including “identification of good practise and case studies where dialogue has succeeded in spite of international events”.

The ground should be laid to ensure “intensified” interfaith activity during times of potential tensions, while guidance should be issued to teachers for addressing the Middle East in the classroom. David Cameron said: “Tackling anti-Semitism goes right to the heart of what we stand for as a country. Whatever our politics, and whatever our faith, we must work together to do everything we can to defeat it.”

Meanwhile, Jewish community leaders this week met the Secretary of State for Education to push for state funding of security around private Jewish schools.

Nicky Morgan MP expressed her support for the principle that “every Jewish pupil should feel safe” as representatives discussed the sensitive issue of extending state funding. Currently the government meets the cost of security for state schools, but there are over 100 private Jewish schools across the country, with parents often asked to contribute.

A CST spokesman said: “We’re talking about schools outside the state sector, many of which are Charedi, so it’s an ongoing discussion that we’ll continue with whoever comes to power after the election.”