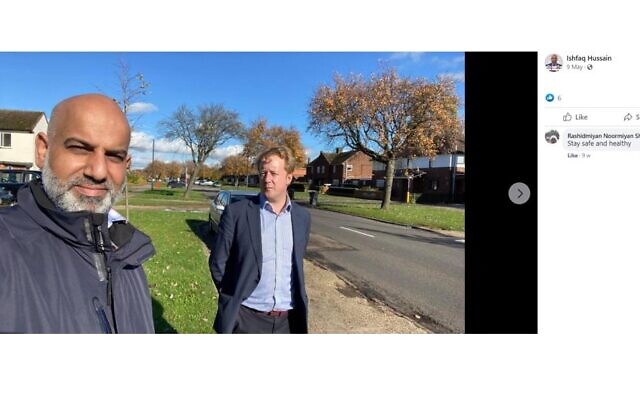 A Conservative MP is facing further questions about his association with a local councillor suspended by the party over claims of “abhorrent” antisemitism.

Paul Bristow, the MP for Peterborough, attended an event in Leeds at which Ishfaq Hussain was also present one month after he was suspended by the Conservatives pending an investigation into his social media posts.

The MP and Hussain were also amongst a group who dined at a restaurant in Leeds – before the pair then travelled back to their home city in the same car.

Hussain was suspended by the Tories in April after a succession of social media posts he made attacking “Zionists” and questioning whether citizens of Israel were “true Jews” were revealed in newspaper reports.

Last week Jewish News told how Bristow – who issued a statement calling for the stain of antisemitism to be erased from Peterborough – had joined Hussain on a “site visit” in the city on 17 June.

But this was not the only time the pair had been at an engagement together since Hussain was suspended, alongside other Tory and Labour activists over antisemitism claims ahead of the May local election. 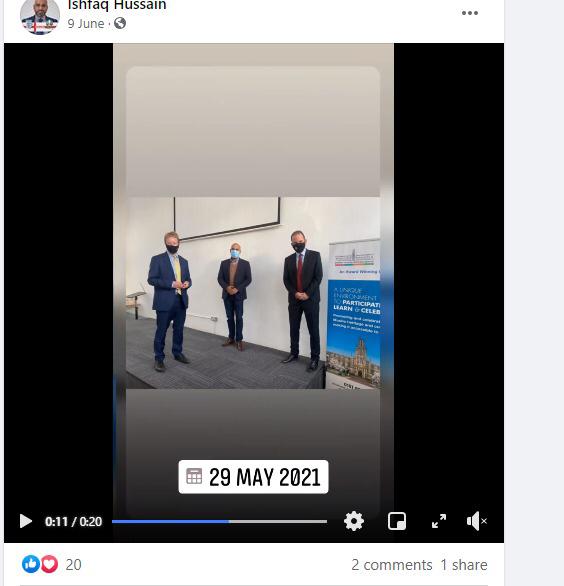 Photographs show that the MP and councillor, who was elected to represent the Dogsthorpe ward despite his suspension from the local Tory Group, were also at the British Muslim Heritage event in Leeds on May 29.

While Bristow said he did not travel to the event with Hussain, he confirmed he been with him at the Muslim Heritage dialogue session.

The MP then said he was present at a meal the Mumtaz restaurant in Leeds at which Hussain was also present.

Bristow said he was there in his capacity as the co-chair of the All Party Parliamentary Group on British Muslims.”

Hussain, Bristow, and others, then travelled back to Peterborough in the same vehicle.

Peterborough Conservatives suspended Hussain in April after it was revealed he had posted on Facebook claims including Jewish people living in Israel are not “true Jews”. 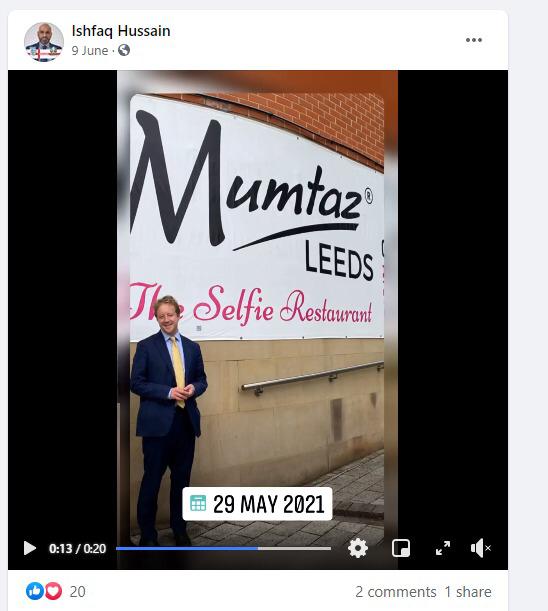 He also said that Israel is part of a “Zionist trilogy” alongside America and Saudi Arabia which “breed terrorists.”

Hussain had also previously turned his profile picture into an image with the caption: “This person does not recognise the State of Israel,” while also claiming that “Zionism is one of the worst afflictions on the world.”

After viewing Hussain’s posts the Jewish Leadership Council issued a statement branding them “abhorrent and antisemitic.”

After Hussein, and several other local councillors were suspended ahead of the local election’s in May, the MP issued a statement saying: “As Peterborough’s MP, I take the suspensions of councillors and candidates very seriously.

“The Jewish Leadership Council is right to say that ‘there is a specific and identifiable problem’ of antisemitism in our city’s politics.

“I have invited JLC representatives to come to Peterborough to meet me and address this problem directly.

“We must lift this shadow over politics in our city.”

But Jewish News understands the meeting the JLC has yet to take place and no date has been put in the diary for it to happen yet.

Facebook posts made by the MP show he has been a long-time supporter of Hussain, declaring himself “proud” that he had been selected as a city council candidate for Dogsthorpe in February 2020.

Subsequent posts show Bristow heaping further praise on his “friend” Hussain who he said was a a great Peterborian” particularly over the work he had done in the local community during the pandemic.

Bristow told Jewish News he was “heartbroken” when he learned about Hussain’s social media posts about Zionists and Jews.

He said he was aware of Hussain’s on-going suspension pending an investigation into his conduct, which has been confirmed to Jewish News by the Tory Party press office.

On 17 June in a social media post Hussain thanked his local MP for joining him on a “site visit” in the local Dogsthorpe ward.

Above a photograph of himself, the MP, and another official, Hussain said that on the “site visit” he had pledged to local residents he would resolve an issue involving a dangerous road crossing.

Hussain wrote: “I would like to thank our MP Paul Bristow… for joining for on the site visit and supporting residents.”

The city of Peterborough has been rocked by antisemitic incidents in both Labour and Tory Groups.

Labour took the drastic step of suspending 14 local members, including seven councillors, just weeks before the local elections in May.

When approached by his local newspaper about his Facebook posts Hussain said in April:”I deeply regret that my frustration at events in Israel and Palestine led me to suggest otherwise.

“At times in the past I reacted irresponsibly on social media. My comments at those moments do not reflect my settled view.”

In a statement to Jewish News, Bristow confirmed that on 29 May he had been invited to attend “the British Muslim Heritage Centre’s dialogue session, and then a meal subsequently in my capacity as the co-chair of the APPG on British Muslims.”

He said MPs were present from both main parties, and councillors including Hussain.

The MP said the “site visit” on 17 June at which he joined Hussain had been organised by Peterborough City Council.

Labour’s Dame Margaret Hodge has said Bristow’s continued association with Hussain after his suspension highlights “sickening hypocrisy” with the Tory Party over its handling of antisemitism claims.

Bristow became MP for Peterborough at the 2019 general election, where he defeated Labour’s Lisa Forbes, who had herself been at the centre of controversy around antisemitism.