She supports BDS, hates Netanyahu and loves Corbyn –Self hating Jew she insists she’s not, hears Francine Wolfisz in an interview with the Harry Potter and Call The Midwife star

Suggesting Miriam Margolyes as my next interview was always going to be hard to pitch to the editor.

A glance at the rap sheet made me wince. She’s an open advocate of boycotts against Israel, a signatory of Jews for Justice for Palestinians and a staunch Corbyn supporter.

She even admitted having “difficulty not wanting Boris Johnson to die” when he was fighting for his life with coronavirus.

Backwards in coming forwards this veteran Oxford-born actress is not – and yet, perhaps, there’s another side to Margolyes, the one that puts as much passion into her acting as she does into the opinions many in the Jewish community find unpalatable.

Curiosity won out and so it was that the 79-year-old Harry Potter and Call The Midwife star and I meet, albeit virtually during an amicable Zoom chat.

We speak ahead of her short online play, Watching Rosie, which explores the intimate bond between Alice (played by Margolyes), a woman living with dementia in lockdown, and her granddaughter, Rosie (played by writer Louise Coulthard).

Directed by Michael Fentiman and also starring The Witcher‘s Amit Shah, Watching Rosie is a specially commissioned short play based on Coulthard’s debut work, Cockamamy, which won the Lustrum Award for Outstanding New Play at The Edinburgh Fringe 2017. 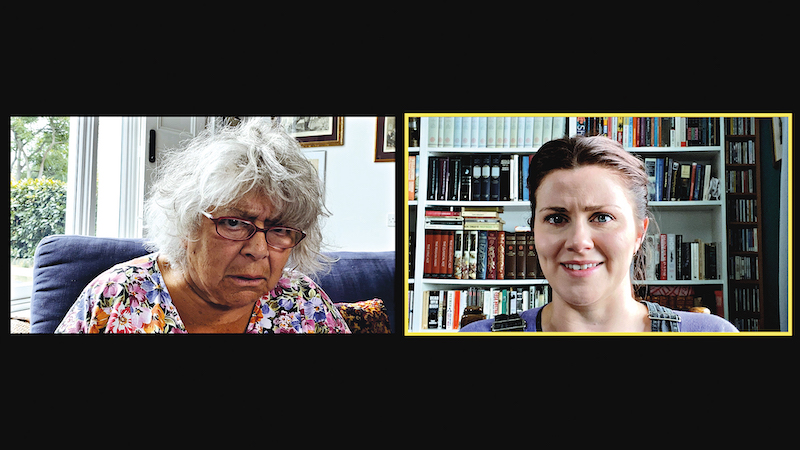 The play stars Margolyes as Alice, alongside writer Louise Coulthard as her granddaughter Rosie

“Dementia is something we are all concerned with, it’s something we all know about and have seen – and I experienced it with my father,” reveals Margolyes, her BAFTA for the 1993 film Age of Innocence peeking out on the mantlepiece behind her.

“Alice has dementia, but she’s not totally gone, and she talks to her grand-daughter every day. She’s very keen that Rosie gets married, because she was very happily married herself for many years.

“In a way, it has a very Jewish feeling, because Jewish mothers always want their daughters to marry. I know mine did. Even when my mother had a stroke and was unable to speak, she used to clutch my arm and say, ‘get married, get married’ with a very ferocious intensity.”

She pauses. “Of course, that wasn’t going to happen the way she wanted it to,” Margolyes adds with a smile, without referring further to long-term partner, Heather Sutherland, whom she lives with between their homes in south London and Australia.

Just a few minutes into our chat, Margolyes has already mentioned her parents and her Jewishness. It feels like a nice segue to ask about her Jewish identity as a whole and to address claims by some that she is a “self-hating Jew”.

Her response is measured, although she emphatically denies that is the case.

“I know people hate me,” she replies. “But there are two names I refute completely. I am not antisemitic, I am a very proud Jew, and have never denied my Jewishness anywhere in life. And secondly, I am not a self-hating Jew. If anything, I am a self-loving Jew.”

But the Cambridge graduate, clearly articulate, intelligent – and at one time training to be a barrister – acknowledges the ill-feeling towards her views on Israel.

“I am anti-Zionist and the reason why is that I have seen the devastation and misery the Palestinian population is experiencing and has experienced from the beginning of Israel’s creation. That makes me sad.

“I believe Jewish people are just and compassionate and our religion strongly emphasises that.

“Every day, I am reminded of the Holocaust and the terrible things that have been done to our people. I don’t forget or overlook that. I just don’t want us to be doing similar things to other people  in the misguided belief that we have the right to do so. We don’t.”

Her staunch beliefs have not been without a hefty cost. “I’ve been called all kinds of names,” she continues. “I get filthy emails and people call me worse than Hitler. But I can’t help it – I have to tell the truth as I see it.” 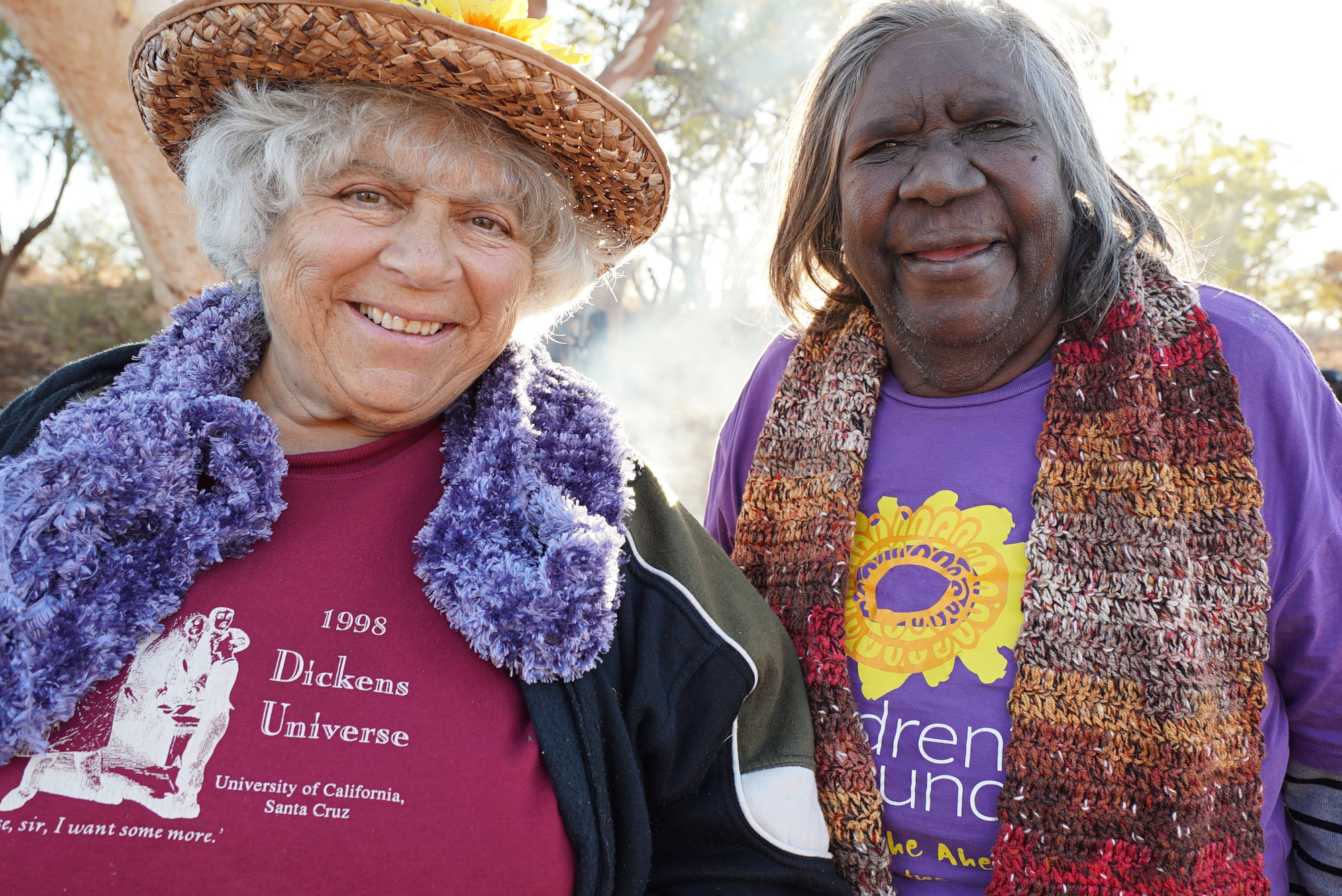 The actress currently features in new BBC series, Miriam Marolyes: Almost Australian, in which she embarks on a two-month journey of discovery across the country

We turn to events closer to home. Corbyn, Livingstone and accusations of antisemitism in the Labour Party seem like an obvious next stop, although I’m not convinced I’ll hear anything other than praise for the former leader.

Surprisingly, there is a slight concession from her on that matter.

“I think he’s done some slightly silly things,” she concedes. “That mural that went up [by Mear One], I think that was antisemitic and he probably should have been aware of that.”

That said, Corbyn is, in her opinion, not an antisemite and neither is Ken Livingstone.

“When he [Livingstone] made that remark about Hitler having an arrangement with the Zionists – all perfectly true,” she tells me, but the words still grate.

Meanwhile, she describes Keir Starmer as “fabulous” and hopes he wins the next election, “because I can’t stand the guy we have at the moment,” she adds with a laugh, not even uttering Johnson’s name.

But she remains unshaken that Starmer was wrong to apologise to the Labour whistleblowers, saying: “I may be wrong, but I think it was motivated by a very clever campaign from Israel.”

It’s time to steer the conversation away from conspiracy theories, but not before she informs me that “antisemitism, my darling, is in the Tory Party, not in the Labour Party – and it has been for many, many years”.

I ask if she has ever personally experienced racially-motivated hatred. “Once, many years ago, when I was going to be a barrister and eating dinners at Gray’s Inn, one of the people sitting opposite me said, ‘Why don’t you go back where you came from?’”

She seems pensive as the memory comes back to her, before recalling another incident when as a young child, she was enjoying a picnic on a field with her parents, until a farmer came along and said, “You people, get off, we don’t want you here.”

“Otherwise I haven’t met antisemitism to my face, because everyone knows I’m Jewish and I’ve always been very open about it,” she adds. “I’m proud of it. My life is informed by being Jewish.”

I’m seen as the enemy. That is extremely hurtful and quite wrong

Yes, she is anti-Zionist, no question about that. She supports the boycott movement and will defend Corbyn to the hilt, but even I have to admit there’s no denying just how much her Jewishness means to her.

In many ways, there’s no worse barb for her than being called a self-hating Jew.

“I’m seen as the enemy. That is extremely hurtful and quite wrong,” she tells me. “If they knew me as a person, they would know that’s not who I am.

“Israel has practically a criminal as prime minister. Why don’t people make more fuss about that? Why don’t they care that people are being tortured?

“Let’s focus on what’s going on there and don’t worry about me. I’m not doing any harm.  I’m just a nice old lady.”

Watching Rosie is available free from  6 August, 7pm, until 30 September at www.originaltheatreonline.com. Donations are encouraged in support of Dementia UK.