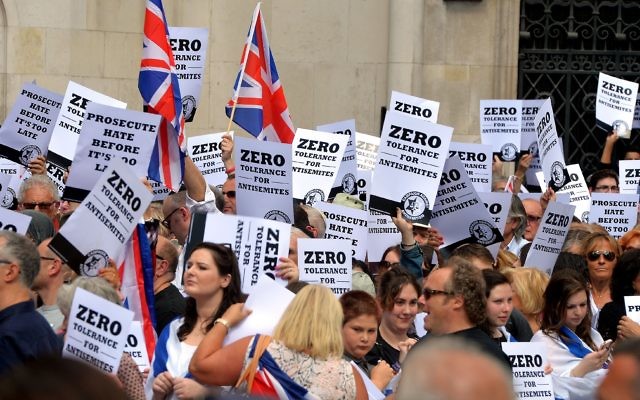 Protest against the rise of anti Jewish sentiment in the UK and Europe.

A man whose supposed European body represents ethnic minorities — except for Jews — has been reported to the police for anti-Semitic comments on Facebook.

Jason Schumann’s website, the European Forum for Ethnic Minority Individuals, Communities and Organisations, known as Efemico, has been taken down in the wake of a stormy fight with the Campaign Against Antisemitism, (CAA) which has taken action against him.

Schumann recently told a Jewish Facebook user: “It is Jews who are the real nazis. [sic] No group of people more insidious, more evil, or more pernicious. An eternal curse upon them.”

CAA investigators contacted EURid, which gives domain status to European organisations, asking who owned efemico.eu. In fact, the owner had entered no name, a non-functioning telephone number and the address of a serviced office centre in Manchester. Eventually CAA established that the website owner was Jason Schumann and invited him to comment on his Facebook remarks.

A furious Schumann responded twice, once to insist “You will kindly refer to me as Mr Schumann”, adding that “any more threats” would be “considered harassment and reported both to the Charity Commission and the police.”

In a second, lengthy email, copied in to Alison Chabloz, who is facing prosecution for an alleged anti-Semitic song, and to Asa Winstanley of the fiercely anti-Israel Electronic Intifada website, Schumann sent 34 separate questions asking why CAA was using “covert activity” to “spy on Alison Chabloz” and to ask about CAA’s operations. He concluded: “I am not done with you yet. You should be mindful never to ever again threaten me. Regards, Jason Schumann. Zionism IS Racism!”

Gideon Falter, chairman of CAA, said: “This incident shows the sophisticated techniques now being used against Jews, even to intimidate them from taking action against antisemitism. Jason Schumann is an antisemite and he should face the consequences of his hatred. We have reported his antisemitic comment to the police.

Through EFEMICO, Schumann has tried to intimidate organisations which fight anti-Semitism by falsely suggesting that they engage in harassment of innocent individuals. Now that they are aware of the situation, EURid, which granted Schumann his official-looking online presence should cease to play a part in the EFEMICO charade.”