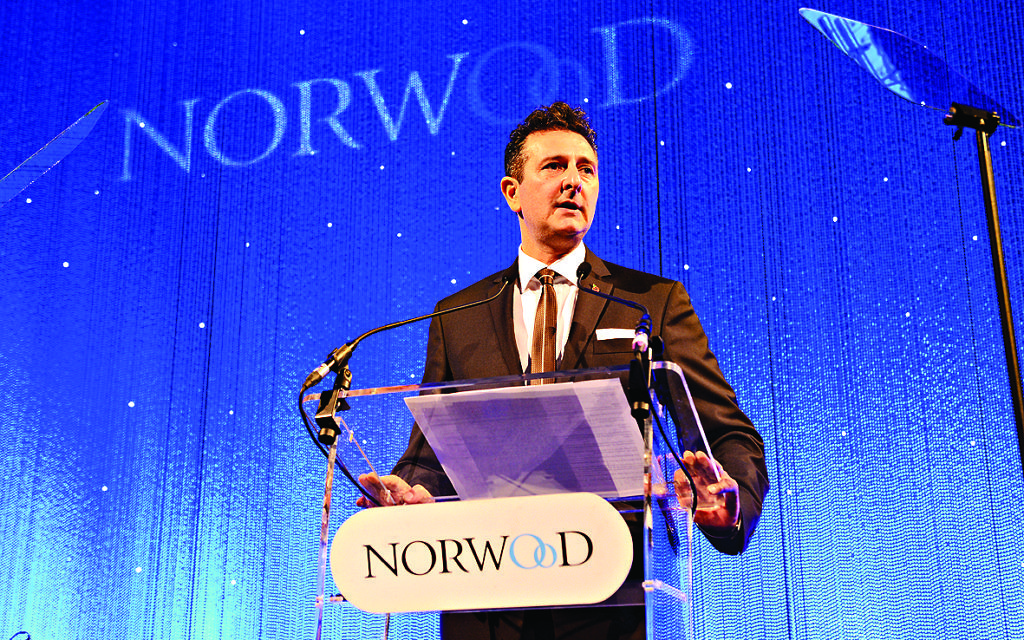 David Ereira is a shy man – except when it comes to Norwood. Championing the charity for more than two decades -18 months of this as chairman – the father-of-three has discovered making his presence felt is essential. If he makes an impact so does the charity and suddenly the possibility of supporting more vulnerable children, families and people with learning disabilities becomes a reality. Though Norwood could keep him occupied full-time, David also runs a successful property consultancy and even manages to sculpt, paint, garden and cook… Some day he might even talk about his hobbies, but for now it’s all about Norwood.

Of all the charities you could have chosen to become involved in, why Norwood?

I have two real drivers, the first is to give a voice to those who cannot speak for themselves among them vulnerable children and children and young people with special educational needs and learning disabilities. My other driver is my passionate belief in the importance of engaging, mentoring and developing young lay leaders in all aspects of communal and charitable work. I joined Norwood in 1992 after attending one of their Business Breakfasts. I looked around the room and realised they were missing out on this elite group who could make such a difference to a charity’s outreach and fundraising potential. The next day I spoke to Norwood’s then chief executive Sam Brier about establishing Young Norwood (YN). We now reach around 3,500 21-35-year-olds and YN is the largest young lay network in the community with a representative on every committee within Norwood and a member on our board. These young lay leaders are the future of our community.

Were you raised within a philanthropic family?

Absolutely. I grew up in a household where both my parents were involved in communal activities at least twice a week. What resonated most with me was going with my mother to deliver Meals on Wheels every school holiday, from the age of seven. Seeing first-hand the impact of social care for people in our community left an everlasting impression on me.

How does Norwood affect your every day life?

Norwood is such a huge part of my life that it’s hard to quantify. It filters into everything I do but in a good way. There are no limits on the time I would give to Norwood. It’s just as much as is needed.

What are your ambitions for the charity going forward?

To be able to train our young lay leaders in order to have them carry on our 215-year history with education and understanding of service provision for the next generation. To ensure that we continue to provide sustainable and high quality services, and are responsive to the changing needs of our community.

How do you feel about having the Queen as patron and 200 years of Royal patronage? Does it make a big difference?

When the Duke of Sussex first took up patronage of Jews’ Hospital it was a testament to his belief in the institution, recognising its huge benefit to the community it served and its ambitions to sustain its work for those in need. Over the last 200 years, Norwood has dramatically grown and evolved, meeting changing needs and responding to the challenges our service users face; however the importance of our continued Royal association and the honour we feel in having Her Majesty The Queen as our patron, particularly as a Jewish communal organisation, remains the same.

Within Norwood, the visits we have had from Her Majesty and other members of the Royal Family have brought enormous pleasure and pride to staff and residents. From a fundraising perspective, for donors and stake-holders our Royal association is a kitemark for the impact we have communally. Moreover, this long and continuous Royal patronage is not only a privilege but also a public approbation of the way that Jewish community supports those in need.

Of the many experiences you have had with the charity, is there one which stands out as particularly moving?

One of my priorities is to raise the profile of the lesser-known services Norwood provides. For example Binoh is one of our support services for children who are in mainstream education but struggling with minor learning difficulties or emotional/social issues. We currently support around 750 children who might otherwise fail without our support. Last year I was on a flight to Israel with a colleague. We were discussing communal engagement when the boy in the row behind politely interrupted, saying: ‘There is a place in Hendon called Binoh that saved my life.’ He said he came from a family of achievers but, at the age of 13, he couldn’t read or write and no one knew why. He was falling down at school and getting a reputation for being naughty, but specialist support he received at Binoh helped him achieve NVQs and get a job at a professional firm after leaving school. He told us he had always wanted to go to Yeshiva like his brothers, and now on this day he was on route to Jerusalem. It was a conversation that will stay with me for ever – going to Binoh had been the defining moment for that boy and had changed his life.

Have you involved your own children with the charity?

With Norwood being such a huge part of my life, my children often attend events with me. It’s part of family life. But while they have grown up very aware of the importance of communal engagement, I have never wanted to pressure them to be part of Norwood – it’s my chosen path but I want them to make their own decisions. Of my two adult children, my son volunteers his professional services weekly and my daughter volunteers as a befriender at Unity – Norwood’s recreational service for children and young people with disabilities.

How has it broadened their world?

I would say they are just as comfortable around children with learning disabilities as they are around those in mainstream education. One of the great things I think we have achieved communally, particularly as a result of engaging the Young Norwood generation, is that we have broken down a divide which existed years ago when people with learning disabilities were barely seen in the community.

Do you talk about Norwood with people outside the charity world and has it led to them becoming involved?

I am actually quite a shy person but when it comes to Norwood I cannot be more vocal so yes, I talk to people outside the charity world. Inevitably it leads to some people becoming involved and I think Young Norwood has been the biggest illustration of this. As importantly, it leads to more people understanding the breadth of our services and the ways we can help beyond a child who has been statemented or a family member who has an obvious learning disability. A lot of my conversations are about the ways Norwood can make a critical difference to all those families who have a child with a non-specific learning difficulty, which is holding them back in school, or an emotional/social issue, which, with a bit of regular support, can be managed.

If money was no object, what would you do for Norwood?

I would want us to ensure we have the provision to be there for every vulnerable child and family that needs our care or support without any waiting lists – for as long as they need us. This has always been a challenge, but Norwood has and will rise to it.