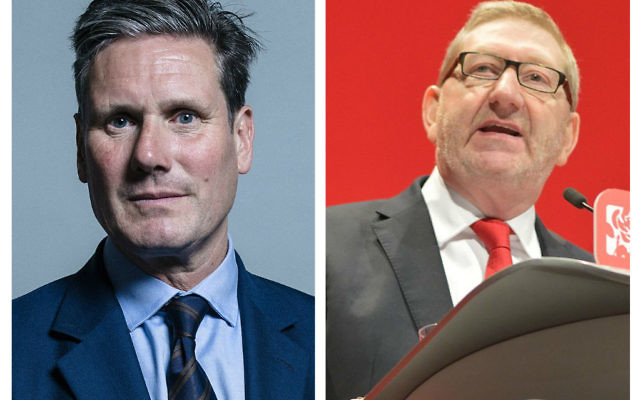 Key Labour sources have slammed claims made by ex-union chief Len McCluskey, that Keir Starmer backtracked on a pledge to reinstate Jeremy Corbyn to the party.

McCluskey, who stepped down as the general secretary of Unite last month, wrote that Starmer “risks becoming fixed in the public’s mind as someone who can’t be trusted” in a recollection of private conversations he claimed he had with the Labour leader.

The ex union chief has used his memoir Always Red to give his account of an alleged backroom deal struck to readmit Corbyn, who was suspended for a statement he made in October 2020 following the Equality and Human Rights Commission (EHRC) report into antisemitism in the party during his leadership.

Sources close to Starmer issued strong denials of McCluskey’s account of the tense negotiations that took place over Corbyn’s suspension.

They claimed it was made clear to McCluskey, and others siding with Corbyn during the discussions, that unless he deleted his statement about the EHRC report from his Facebook page – which stated that claims of antisemitism in Labour had been “dramatically overstated” – sanctions would not be dropped.

“Len cannot acknowledge that even he could not get Jeremy to apologise or retract his original statement,” one senior figure told the Guardian.

McCluskey claimed Starmer had agree to readmit Corbyn after a new statement as issued.

He claimed that the MP Jon Trickett and Starmer’s senior adviser, Simon Fletcher, had worked up a draft statement.

McSweeney claimed he was representing Starmer’s view during the discussions – and that if a suitable form of words could be agreed with the statement, the Labour leader would accept Corbyn’s full return to the party.

But while Labour’s NEC restored Corbyn’s party membership, he has not had the whip restored.

McCluskey says in a subsequent phone call with Starmer the Labour leader told him he was “beyond angry with Jeremy.”

He suggested Starmer had himself breached the recommendations of the EHRC report by becoming personally involved in Corbyn’s suspension – despite the reports call for an end to political interference over disciplinary decisons.

But Labour’s sources insist their legal boss gave the general secretary, David Evans, his view that the EHRC’s conclusions meant Corbyn had to be suspended and that  Evans agreed.

Starmer was in the room at the time, the Gurdian reports.

“Keir could not have ordered the suspension. He had been briefed multiple times by the EHRC about the implications of this report – he took it extremely seriously,” one senior aide told the newspaper.