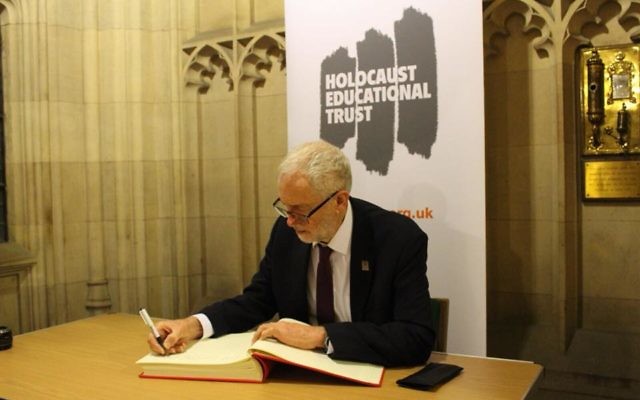 Jeremy Corbyn signing the Holocaust Educational Trust's book of commitment last year. The Labour leader faces calls to distance himself from the Palestine Solidarity Campaign of which he is a patron - after a local branch was accused of promoting Holocaust denial.

Labour leader Jeremy Corbyn faces angry calls to distance himself from a pro-Palestine group – of which he is a patron – after a local branch was accused of promoting rampant Holocaust denial on social media.

The Palestine Solidarity Campaign’s Brixton branch (PSC), which backs boycotts against the state of Israel, drew fierce criticism from online users and activists at the weekend amid claims it promoted antisemitism and Holocaust denial in a tweet.

The tweet, seemingly deleted after it was sent from the official account for the branch on 25 January, contained a link to an article appearing to suggest the number of Jews murdered during the Holocaust could have been “exaggerated.”

The opinion piece, entitled The Jewish Holocaust And The Palestinian Nakba and published on the blog “Days of Palestine” last week, appears to draw comparisons between the Holocaust and the Israeli-Palestinian conflict. 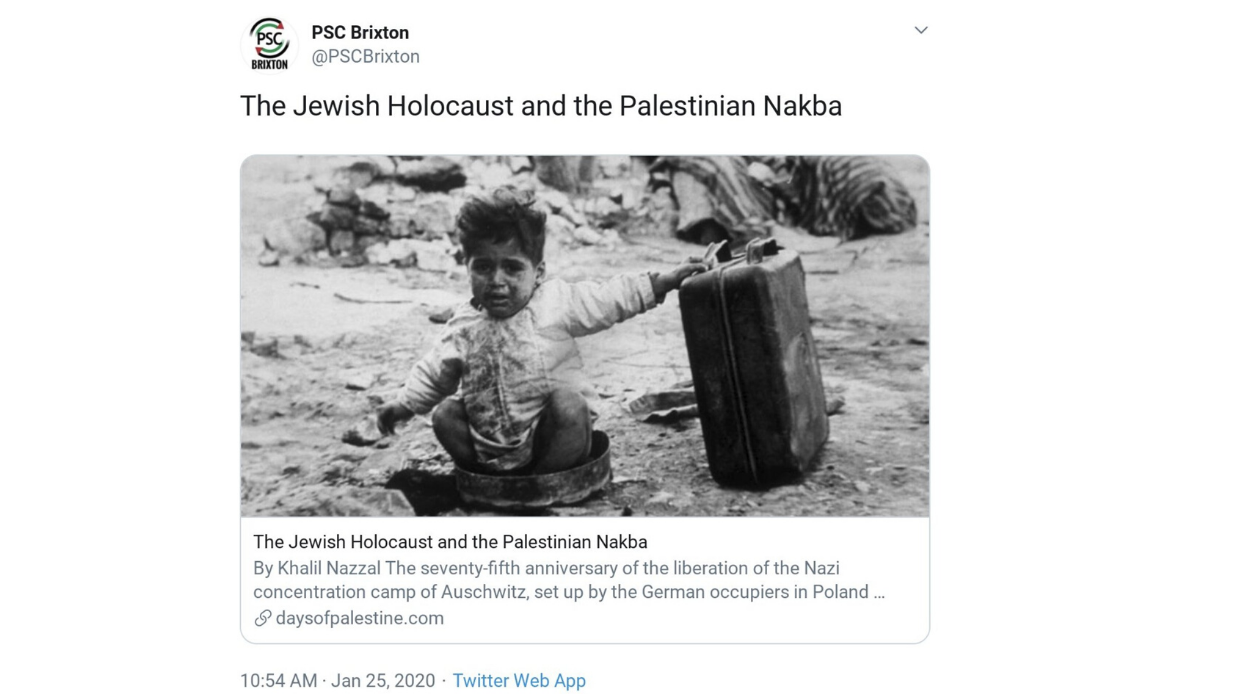 It claims that “accounts vary” on the number of Jewish victims murdered in the Holocaust, saying that while “some historians” estimate the figure to be six million, others “reduce it to hundreds of thousands.”

The piece also suggests a “tendency to exaggerate the number of Jewish victims” could have been used as a “cover for the daily Israeli crimes against the indigenous people of Palestine.”

“This exaggeration has been an attempt to label all those who possess the courage to reject the occupation’s policies and stand in solidarity with the just struggle of our people as ‘antisemitic,'” the article states.

Between 1941 and 1945, six million Jewish people died in the Holocaust – the Nazi regime’s systematic mass murder of Jews. Some 1.1 million people, most of them Jews, were murdered at the Nazi death camp Auschwitz-Birkenau, which was liberated 75 years ago today.

The PSC’s Brixton branch tweeted on Sunday: “Top tip: It would be that bit easier if you stop assuming everyone who criticises Israel is antisemitic… Fighting antisemitism will become that bit harder when the last Holocaust survivor leaves us.”

Addressing the criticism on Monday evening, the branch said it made a mistake in sharing the article. “Why are you blaming PSC, I made the mistake – I took down the post as soon as it was brought to my attention – I blindly forwarded it to Twitter assuming it was a trusted news site; in my 820+ posts, I have made 2 mistakes,” it wrote.

But a spokesperson for the PSC said it takes accusations of antisemitism “very seriously” and has procedures to address allegations, including disciplinary sanctions.

“As an organisation we are very clear that antisemitism, including any attempt to minimise or deny the Holocaust, has no place anywhere in the campaign for Palestinian human rights,” the spokesperson said. “We strive to ensure that all of our communications, both local and national, embody our values of anti-racism and anti-discrimination, and this is reflected in our guidance and training for members and branches.”

Days of Palestine and the Labour Party were reached for comment.