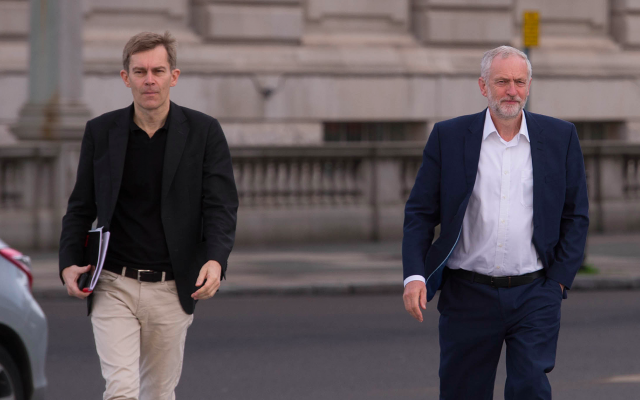 Labour is set to name five former party employees it claims were responsible for leaking a controversial internal report into antisemitism which largely exonerated Jeremy Corbyn from blame.

Documents to be filed at the High Court Labour are poised to name Seumas Milne, Karie Murphy, Georgie Robertson, Laura Murray and Harry Hayball as those involved in the leaking unredacted version of the document, lawyers acting for the accused claim.

The circulation of the Labour commissioned Report – entitled “The work of the Labour Party’s Governance and Legal Unit in relation to antisemitism, 2014 – 2019 – sparked anger after it disclosed names and details of complaints and complainants.

Many antisemitism complaints were submitted by Jewish Labour members.

In a press release on Monday, Carter-Ruck, the legal firm representing the five individuals named said they “strenuously deny, and have consistently denied, any involvement or complicity in the leak whatsoever.” The firm said the five “also deny having any knowledge of who was responsible.”

Milne was Corbyn’s director of communications, while Murphy was the ex-leader’s chief of staff. Robertson worked in Labour’s press office, while Hayball was a Momentum activist. Murray meanwhile was another close adviser of Corbyn’s.

As such, Carter Ruck added, the individuals will vigorously defend themselves in the proceedings and will seek full reimbursement of their costs of doing so from the party.

The five individuals accused of the leak have been interviewed by an external investigator, and by Martin Forde QC, commissioned to produce a report into the leaking by Keir Starmer.

A spokesperson for the former Labour Party employees said: “The individuals entirely reject these baseless claims. They did not leak the report. They fully cooperated with the Party’s investigation by an independent external investigator, and with the inquiry led by Martin Forde QC.

“They understand that neither of those investigations concluded that they were responsible.

“The Party has already acknowledged in court that it cannot be certain who leaked the report and that its “case” against them is circumstantial. But it is now trying to make them foot the bill for legal action brought against it.

The Party should be focussing on the deeply troubling evidence contained with the leaked report, rather than trying to wrongly scapegoat and victimise former staff who documented it, and who have not been accused by either of the independent investigations.”

The leaked paper was originally intended to be submitted by Labour to the EHRC’s investigation into antisemitism in Labour.

But lawyers for Labour said the report was not helpful for the on-going investigation at the time so it was never submitted.

After the document was leaked, intially to Sky News in redacted form, and then to pro-Corbyn websites without redactions, Labour were left facing a string of legal claims, some from Jewish members furious their confidential complaints had been leaked.

Other submitted legal claims over data breaches, leaving Labour with the prospect of huge legal payouts.

Earlier this year at the High Court Labour said it did not want to name the persons responsible for the leak – unless they were ordered to by a judge.

However Emilie Oldknow – a former Labour executive whose Whatapp messages were revealed in the report – has taken legal action against the part over its leaking.

Oldknow’s legal representatives described the report as a “one-sided factional attack” on ex-employees.

The leaked dossier was an attempt to portray Labour staff who were opposed to then leader Jeremy Corbyn as having hindered efforts to tackle antisemitism.

The document- dated March 2020 and leaked in April 2020 – claimed some Labour Party staff did not want Mr Corbyn to win the 2017 general election.

But it was leaked in an un-redacted version – including the names and details of complaints made by Jewish members and non-members of the party about individual cases of alleged anti-Jewish racism.

The names, including those of Jewish members alleging serious wrongdoing, were widely circulated online, including on far-right websites.