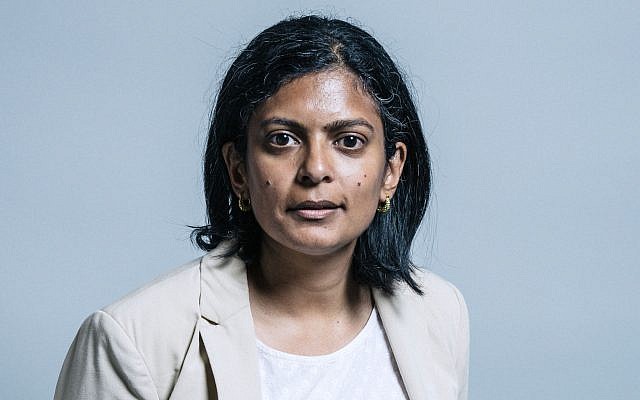 A Labour MP has plunged the party into yet another antisemitism row after two former employees lodged formal complaints against her, a report claims.

Rupa Huq, 47, faces accusations of antisemitism from two-former employees who worked at her office in Westminster until this year, The Times reports.

One of the complainants, who worked for Huq for nearly a year, has sent the party a 2,500 word-dossier detailing alleged antisemitic incidents in her Wesminster office, which the Ealing Central and Acton MP denies as “false and malicious” accusations.

One of the ex-staffers claims his relationship with the MP soured after she asked why he bore the “flag of Israel” on his bag, referring to a Star of David badge pinned to his satchel.

The complainant said he explained the symbol represented his Jewish faith, not the Israeli flag, but claims the MP repeated the question several times during the day.

The second complainant accused Huq of making a former employee “listen to her conspiracy theories surrounding the Jewish community” but a source close to Huq denied the allegation to The Times.

According to the ex-staffer, Huq also removed a “No tolerance for antisemitism” poster from the wall, saying “We obviously don’t need this anymore” when the first complainant was off-sick.

According to the complaint, an email was sent from Huq’s parliamentary account to an employee about a Jewish student applying for a role. “Will have to say no but don’t want him to claim antisemitism,” the MP allegedly wrote.

The complaint claims Huq devised “a separate line of questioning based on Judaism and loyalty to Israel” when interviewing another Jewish candidate in September.

This comes days after calls for the suspension of Lisa Forbes who retained the Peterborough seat despite claims she endorsed antisemitic material online.

Less than two weeks ago, the Equalities and Human Rights Commission opened a formal investigation into claims of antisemitism in Labour, making it the second party to be probed by the watchdog.

A spokeswoman for Huq said: “We don’t comment on staffing matters. Any suggestion that Rupa is antisemitic or has acted inappropriately is entirely false and malicious.”

A Labour spokesperson said: “Our complaints procedures are confidential and we can’t comment on individual cases. We take all complaints seriously, and they are fully investigated in line with our rules and procedures.”